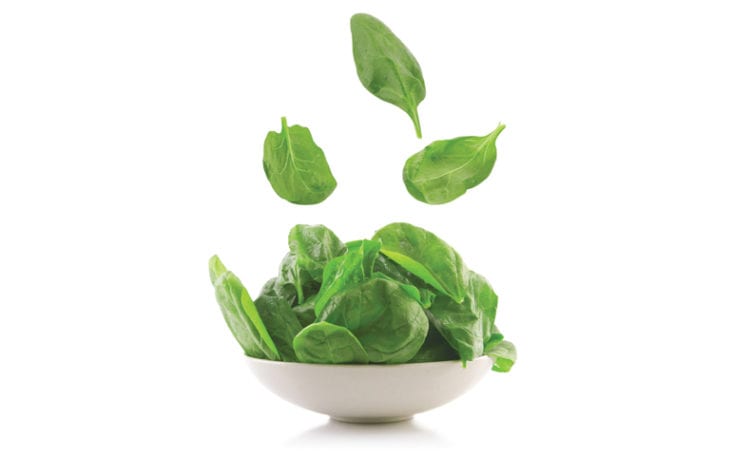 Spinach is the quintessential leafy green. It’s often what people think of when they think “healthy.” It is also a highly versatile green that consumers use for salads, dips, garnishes, sandwiches, pasta, casseroles and more. When BrightFarms, a commercial scale greenhouse operation with locations in Bucks County, Pennsylvania; Culpepper County, Virginia; and Rochelle, Illinois, launched in 2007, spinach was at the top of the list of crops to grow alongside other leafy greens and tomatoes. – BrightFarms

“In general, spinach is dark green, with unique flavor and packed full of nutrients,” said Nick Chaney, head grower at BrightFarms Chicagoland Greenhouse. “We have taken this highly desired crop and made it pesticide free, tender and local.

“We grow our spinach in conditions that are optimal for the spinach itself. We don’t want to force our plants to grow in undesirable conditions or manipulate the nutritional content,” he added. “That means that our customer experiences the most delicious and safest spinach on the market.”

Location is a significant factor in accomplishing this. “We pride ourselves in being within 100 miles of our customers. That majority of our stores receive products within 24 hours of harvest – that’s fresher than anything else on the shelf,” he said.

BrightFarms grows spinach because of its health benefits and because of consumer demand. “Spinach is easy to market. We just ensure that we always have the highest quality on the shelf,” Chaney said.

Despite its popularity, it’s a tricky cold-season crop that can be challenging to grow. “The germination needs are much different than the other crops we grow and we have to pamper them,” he said.

One reason spinach is difficult to grow is its susceptibility to pythium crown and root rot in greenhouse growing conditions. Michigan State University Extension noted that “root rot diseases prefer growing conditions that are too wet, such as when media does not drain quickly or when weather doesn’t allow rapid drying. Pythium can be introduced into a greenhouse via plant plugs or other prefinished plant material. This pathogen can also be a greenhouse “resident” that hibernates on dirty plant containers, benches, hoses and greenhouse walkways, ready to become activated by the right plant and weather conditions.

The easiest method for controlling pythium is the application of fungicides.

“There are a plethora of chemicals out there that can be used to combat it, but we proudly do not allow them in our facility,” Chaney said.

This makes the battle more challenging for the growers, but it guarantees a product free of chemicals for the customers. Therefore, all growing surfaces are sanitized to break any carryover there might be from pythium spores.

“We focus on creating a healthy, stable aquatic ecosystem that will self-regulate any undesired spikes in bacteria, fungii, viruses and pests. It’s a delicate balance of pH, nutrients, temperature and living organisms to create the right conditions for spinach to thrive,” he said.

BrightFarms has also identified climatic changes that have allowed them to essentially eliminate pythium from their system without using chemicals and subsequently expand spinach production with great success.

“We keep our ponds under 21 degrees,” Chaney said. “That inhibits the rate of pythium growth.”

Like all crops grown at BrightFarms locations, spinach is raised in a soilless hydroponic system.

Not only does the hydroponic growing system conserve water, it increases yields compared with field agriculture per square foot. By growing the crops in a soilless medium, it’s possible to add the optimal amount and mixture of nutrients that each specific crop requires. The result is year-round growing and harvesting in a controlled environment. The system also allows greater control of the growing climate, pests and disease.

“We use up to 10 times less land than field agriculture growing our spinach,” he said (Learn more about hydroponic growing on page 30.)

At the BrightFarms Chicagoland Greenhouse alone, the employees seed and harvest nearly 2,000 square feet of spinach each day, which equates to approximately 120,000 pounds each year at this facility.

Each greenhouse employs about 25 staff members to plant, care for, harvest and package all crops grown there. Combined across all farms, employees are seeding and harvesting 5,500 square feet of spinach daily at all current locations.

“These numbers fluctuate with season and demand, but demand is growing exponentially,” Chaney said.

Spinach, like most of the BrightFarms baby greens, is cut just after a few true leaves have matured. They are grown on floating rafts. These rafts run through a processing machine that harvests, cleans and sanitizes the boards. The baby spinach is only 20 days old when it is cut, packaged and delivered to the customer the next day.

“We align with our customer’s opinion that a tender, young spinach leaf is at peak flavor, texture and nutrition,” he said. “Most leafy greens have higher concentrations of nutrition in the younger stages of development and less cellulose, making them softer and more tender.”

Although spinach is a relatively easy crop to market and sell, the leaders at BrightFarms have invested in food safety certifications that act as another marketing tool.

“We are GAP certified and we are currently undergoing the GFSI certification process at two of our farms,” Chaney said.

GAP, which stands for Good Agricultural Practices, are voluntary audits performed by U.S. Department of Agriculture that verify that fruits and vegetables are produced, packed, handled and stored as safely as possible to minimize risks of microbial food safety hazards.

Pursuing a higher standard of food safety is never an easy undertaking and requires processes, documentation, training and discipline. It provides customers comfort in their purchase.

“After months of planning and implementation our food safety procedures ensure that our products are always safe for our customers to enjoy without having to worry,” he said. “And we want to be leaders in the industry in providing the best products out there in all categories.”

The inspiration for BrightFarms grew out of a desire to grow food in the same communities where it’s consumed. The end result is to offer consumers produce that’s fresher, tastier and better for the environment.

Under Caplow’s leadership, NYSW created the Science Barge, a prototype, sustainable urban farm and environmental education center on the Hudson River. Following the barge project, NYSW was flooded with requests to build science-barge-like projects. In 2007, BrightFarm Systems, a consulting firm, was created to respond to the demand.

In 2011, Lightfoot became the CEO of BrightFarms following a midlife crisis that inspired him to combine his career in supply chain management with his passion for bringing food to people that tastes better, is healthier and is better for the environment. The company has since raised more than $30.1 million in capital and has partnered with multiple large grocery clients who have agreed to buy produce from BrightFarms projects.

With produce that is generally a week fresher than the long-distance products it replaces on supermarket shelves, BrightFarms provides consumers with fresher, more nutritious and more delicious baby greens and tomatoes at leading retailers such as Mariano’s (Kroger), Giant Food (Ahold USA), Wegmans and ShopRite, from local greenhouses near Chicago; Washington, D.C.; and Philadelphia.

Looking to the future

Learning from success in the solar industry, where end-users pay long-term, fixed rates on the “hardware,” BrightFarms is offering grocers the same thing as their customers: a long-term, fixed-rate concept on consumables – the salad greens and tomatoes the farm grows in its greenhouses.

For now, Lightfoot and BrightFarms are concentrating on areas outside the top leafy green-producing states to provide consumers in cold climate areas access to fresh greens year-round. But, given the unpredictability with weather, if the drought continues in areas traditionally ideal for growing crops, anything is possible.

“Because our spinach is delicious and safe, it drives customers to eat more and in turn is driven to be healthier,” Chaney said.