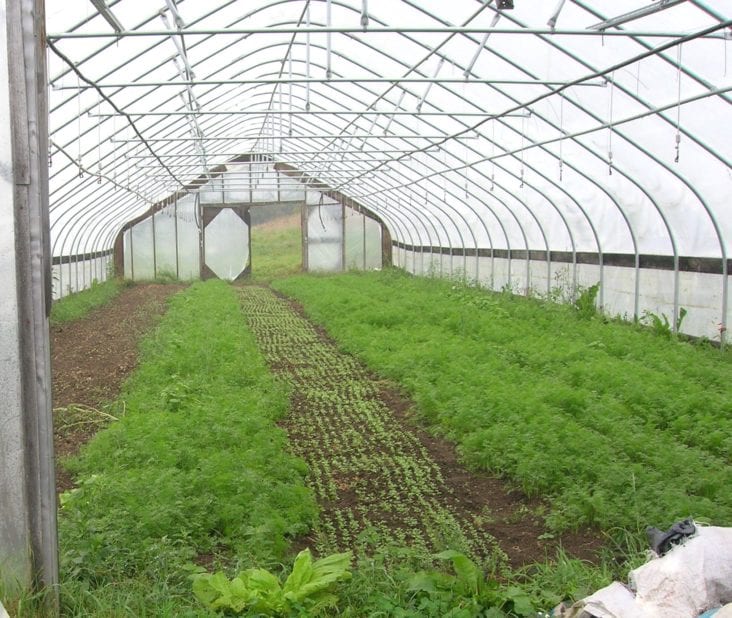 As high tunnels are used more and more by growers and the optimal growing techniques are developed and tested by scientists, it becomes easier for potential users to evaluate their place on the farm. Take a look at some experiences and research projects here in the South to determine if high tunnels are right for your operation.

Some growers may wonder about the advantages of high tunnels. After all, agriculture has thrived for centuries without such apparatuses. In today’s competitive marketplace, however, growers need all the beneficial tools they can secure.

One important benefit is season extension. High tunnels, with dimensions that accommodate a standard-size tractor, can help growers produce crops earlier in the spring and later in the fall—some even report year-round production. Being able to harvest fruits and vegetables out of their traditional growing season allows farmers to command higher prices. That availability also helps secure a customer base.

The tunnels offer some protection from wind, rain and hail damage, as well as frost. They are likely to withstand the minimal southern snowfall, but ice storms and hurricane-force winds could overpower the structures. The enclosed environment means that harvesting and other operations don’t get rained out. The crops may have better yield and higher quality.

On the downside, extending the season eliminates a break in the yearly work schedule. Increased management demands and plastic disposal issues also are concerns. While tunnels are relatively inexpensive, especially when compared to greenhouses, they do add to production costs. However, many growers report that they pay for themselves in as little as one season.

At the 2007 Southeast Strawberry Expo, several growers and researchers shared their experiences with high tunnels. Cal Lewis of Lewis Nursery in Rocky Point, N.C., installed 2 acres of Haygrove solo tunnels in February 2007, at a cost of $30,000 per acre. His ultimate goal is to replicate Florida conditions to produce early strawberries.

Due to a mild winter, Lewis already had berries blooming in the field and installed the tunnels over them. When temperatures were predicted to reach 33 degrees or less, he added floating row covers. These techniques allowed him to harvest from Valentine’s Day to Mother’s Day, approximately two months earlier than traditional harvesting in his coastal North Carolina location.

Lewis said the tunnels provide a simple and effective method for controlling low temperatures, but managing heat is more difficult. As the spring progressed and air temperatures reached 70 degrees, the interior of the tunnels got as hot as 100 degrees. To avoid scalding the berries, the plastic sides had to be opened each morning, but later closed for protection from chilly nighttime conditions. That added to labor needs and the procedures for opening and closing the tunnel sides must be carefully followed to avoid forming pockets where rain can collect.

Lewis also found that the dry conditions within the tunnels increased stress from mites and powdery mildew. He wasn’t pleased with the beehives he placed inside for pollination, but was able to open the sides to allow other bees in.

Lewis believes that tunnels can be a profitable way to extend the season for growers who have supporting markets. He plans to continue testing the technique with a goal of establishing niche markets for early and late berries.

As Lewis’s experience shows, tunnel production is quite a different animal from field production. At this time, growers are using field recommendations because that is the only available resource. However, that is changing as universities and the Cooperative Extension Service develop the optimal techniques.

At the Strawberry Expo, Andy Myers of North Carolina agriculture department’s Piedmont Research Station in Salisbury reported on his strawberry trials. Working with day-neutral varieties such as Seascape and Albion, he has kept production going nearly year-round. Berries planted in mid-September bore fruit from late November to late January. Production was shut down until March, with harvesting resuming from early April to early June. A new planting took place in early July; the harvest that began in August was ongoing at the time of the mid-November conference.

Myers suggested that further trials may reveal the need for different planting dates and different colors of plastic. Shade cloth will be evaluated for preventing fruit scalding during warm periods.

A 2005 Agricultural Research Service investigation in Beltsville, Md., compared its high tunnel-grown tomatoes with field and hydroponically grown fruit obtained from a wholesaler. Using Oregon Spring and Red Sun tomatoes, the scientists found that the soluble solids content of the high tunnel fruit was higher than that of commercially produced tomatoes. Field-grown specimens were the firmest and hydroponic methods yielded the highest concentration of volatiles. Tunnel tomatoes had higher sensory scores for sweetness and flavor. They were perceived as preferable in texture, taste and overall quality for consumption. The scientists said theirs was the first study indicating that consumers better accept high tunnel tomatoes than commercial fruit.

In Kearneysville, W.Va., fall strawberry production in the Mid-Atlantic region was studied from 2002 through 2004. Previous research showed that dormant plants or freshly dug Canadian transplants weren’t productive for the fall season. Scientists tested greenhouse hydroponically grown plants for suitability in high tunnel operations. The July-plugged plants showed the most promise, with 80 percent of the transplants showing flowers and/or fruit in November. Ripe berries weighed as much as 1.25 ounces. The possibility for successful high tunnel fall strawberries seems strongest when using July transplants. Scientists suggest double-cropping to enhance profitability.

The Southern Region Small Fruit Consortium has funded another study aimed at improving fall strawberry production. Clemson University is conducting an investigation of manipulation of light quality at its Coastal Research and Education Center in Charleston, S.C.

An Israeli-designed product, ChromatiNets, allows enrichment of the light environment. The colored nets have special optical properties that improve crops’ use of solar radiation. The product allows growers to control growth and the rate of maturation and flowering. Investigators are studying specific nets that are believed to increase vegetation, increase branching and increase vegetation and fruiting. Results of the nets’ impact on forced fall/winter strawberries grown in high tunnels will be available later this year after the first year of study concludes.

Trials surrounding high tunnels for spring and fall blackberry production are ongoing at the University of Arkansas. A fall blackberry crop is made possible by new primocane fruiting varieties. The patented Prime-Jim and Prime-Jane varieties produce a normal summer crop plus a fall crop until the first frost. With high tunnels, system plants are protected from frost, extending the fruiting season well into November. The methods are being used with raspberries as well.

As year-round demand for fresh fruits and vegetables increases and the locally produced food trend gains in popularity, high tunnels are a resource that can allow Southern growers to profit from those markets. Extending the growing season by even a few weeks at each end can keep local customers coming and willing to pay premium prices.