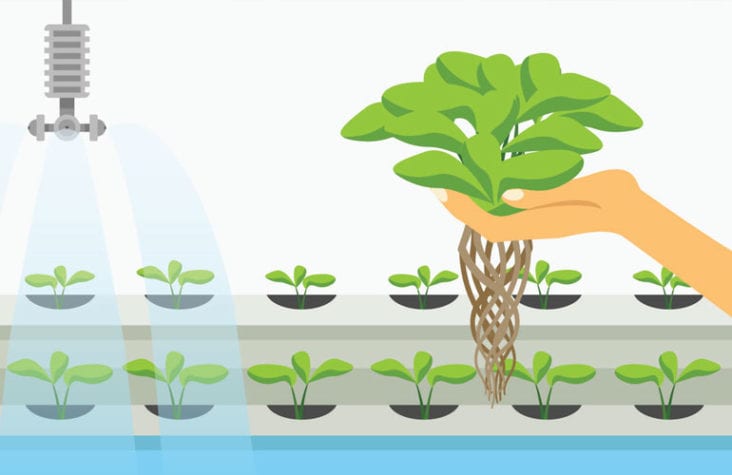 What is hydroponics? The roots of the word derive from two Greek words, “hydro,” meaning water, and “ponics,” meaning labor. For this column, we will assume that movement and control of the flow of water to and away from the plants is necessary to be considered hydroponics. – Hydroponics

Another differentiating factor is that fruits or vegetables grown in the system will not get their nutrients from soil, but rather from a nutrient solution. When most people think of hydroponics, they think of plants with roots suspended in water, but we will also include those crops that are grown in an inert medium, the primary purpose of which is not to provide nutrients to the plant.

The final factor that we assume is that the growing area is in a controlled environment, in which we can regulate the daily exposure of the sun, as well as manipulate temperature, air flow, PH levels and carbon dioxide levels.

Most commercial hydroponic farms are indoors (in a warehouse or greenhouse) where these and other factors can be monitored and adjusted over a growing cycle. Basically, hydroponics is considered a subset of CEA (controlled environment agriculture).

Many mediums can be used in hydroponics, including rock wool, coco, perlite, vermiculite and clay pebbles. Although these do not contain significant levels of nitrogen, phosphorus, potassium or secondary nutrients, they do serve a purpose, acting as a buffer or stabilizer to the crop, which will be covered in later issues.

The hydroponic nutrients are far outpacing the expansion rate of the overall fruit and vegetable market, and is expected to average a compound growth rate of 6.5 percent annually.

There are many advantages to using hydroponic techniques. As already mentioned, one of the most important is the element of control. By adjusting exposure to light and darkness (manipulating the photoperiod) you control when the plant buds or flowers. 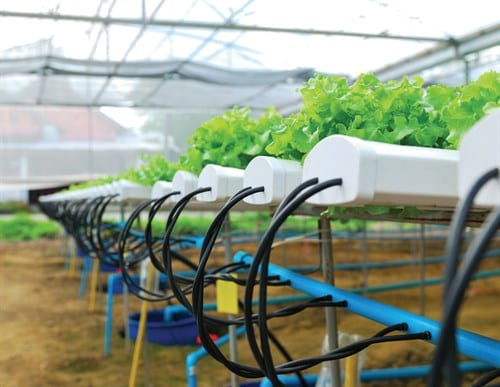 By controlling the photoperiod (relative length of days and nights), you may also delay the flowering or fruiting cycle of plants, by allowing them to spend more time in the growth area in a vegetative state. This would result in much larger plants entering the fruiting area, larger plants to eventually harvest, likely resulting in much higher yields than a traditional growth cycle.

Since you are no longer limited by seasonality of your location, you can drastically reduce the time of the crop cycle and benefit from multiple harvests per year.

Many operations use a perpetual harvest technique, where there are separate areas for germination, growth and fruiting stages of plant development. There are several stages of growth within each of these groups.

For example, you may have a group of produce that moves along weekly through various areas of your setup. We’ll assume the flowering or fruiting plant takes eight weeks of exposure to a decreasing day length to reach maturation. In this scenario, you would have eight stages of plants in the flowering area, allowing the harvest of each stage in weekly increments. As soon as a group of plants has matured (once they have stopped producing fruit), another group of plants is ready to take their place from the growth area.

Plants from the germination area are ready to replace the growth area’s plants. The operator then plants more seeds, or performs a cloning operation, in the germination area. This system allows harvesting of fresh produce at weekly intervals with no downtime between crop cycles, allowing you to grow uninterrupted year-round.

Since you can manipulate what nutrients the plant receives, when the plant receives them and how they are delivered, you are in a position to provide it with precisely what it wants in the most optimal way. Therefore, it is no surprise that yields from hydroponics far exceed those of traditional counterparts.

You also have control of what stays out of your plants. Air or water contaminants, insects and other predators such as rodents and even deer are much easier to keep at bay when you are operating in a contained environment.

In essence, hydroponics allows you to create an environment that allows your plants to flourish.

Other advantages include efficiency, scalability and customization. Efficiency generally refers to the increased yields per square foot. Some hydroponic systems are designed to allow the grower to vertically stack the crop, resulting in efficiency of cubic feet, not just the traditional single level measurement of square feet.

Many systems commercially available can be scaled to meet specific demands of the application. Systems range from those that accommodate a single specimen to systems capable of handling acres of plants. Depending on many factors – size, shape, growing characteristics, fertilization requirements, support, temperature, humidity, light requirements and length of crop cycle, there is a custom hydroponic setup that will work in any scenario.

All this said, there is a major drawback of hydroponics, namely costs associated with setup and initial production. Any time you add buildings, supplemental lighting, air conditioning, venting, heating, as well as water pumps and other supplemental equipment to the list of costs, it may seem prohibitive. In essence, you are exchanging costs for control, quality, increased yield and continuity.

In addition, your setup will undeniably take a couple of crop cycles to “dial in.” This involves learning the idiosyncrasies and tendencies of your crop, setup and system to optimize output and quality. Consider this an opportunity to become more efficient. Don’t be afraid of the learning curve.