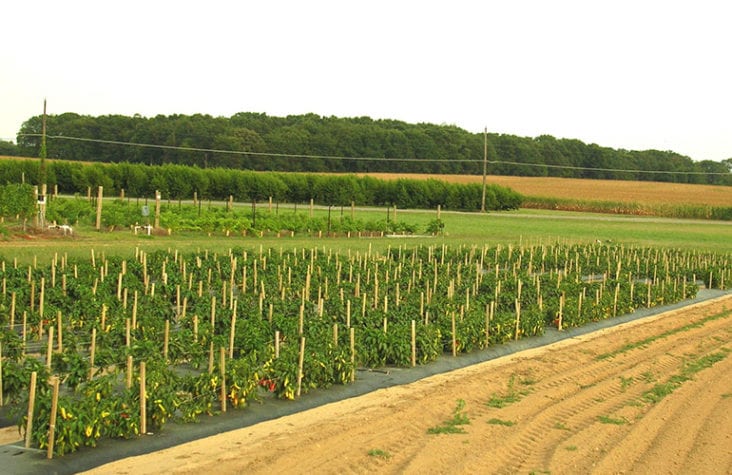 Peppers and tomatoes are major crops in many vegetable production areas, and growers are always seeking ways to maximize both yield and quality. One method of increasing both fruit quantity (number and size) and fruit quality is by the use of black plastic mulch in combination with trickle irrigation. Research has shown that, in addition to a mulch system, staking both tomatoes and peppers has many advantages: it keeps the plant upright and the fruit off the ground, making them less susceptible to rot and insect damage; it helps reduce sunscald on fruit; it makes it easier to harvest than ground plants; and it actually opens the plants up and provides for better spray coverage for pest control. – Tomato and Pepper

Staked tomatoes consist of a series of wooden stakes with twine woven around the stakes to train the plants to grow vertically off the ground as well as support the weight of the fruit. Stakes can be 4 to 4.5 feet long by 1 to 1.5 inches square, driven about 12 inches into the soil between plants. Vigorous varieties may require thicker or longer stakes.

In general, placing stakes between every other plant is adequate to support most determinate varieties. Make sure the stakes are driven into the soil at the same depths so that a spray boom can still be operated over the trellis without problems. Use commercially available “staking twine” (polyethylene) that is resistant to weathering and stretching, and binds well to wooden stakes without slipping.

Proper stringing consists of tying the twine to an end stake, passing the string between each plant, and looping the twine around each stake as you go until you reach the end of the row. Then, continue the same process on the other side of the row, making sure that the string tension is tight enough to hold the plants upright without causing damage to the plant or fruit. Remember to always string the plants when the foliage is dry to prevent spreading bacterial diseases. The first string should be located 8 to 10 inches above the ground when the plants are about 12 inches high. A second string should be placed 6 to 8 inches above the first string before the plants start to fall over. Pass the second and additional strings along one side of the row of plants and loop the twine around each stake. A total of 3 to 4 strings will be required for most determinate varieties. 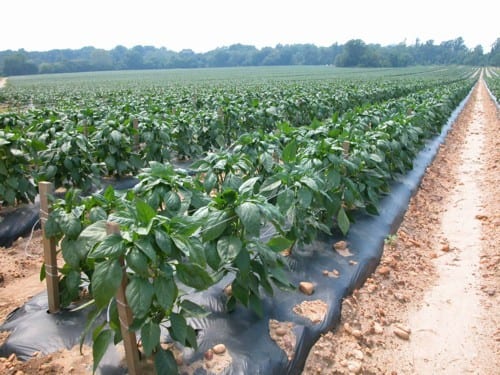 Peppers can be staked by using 2 to 2.5-foot long by 1 to 1.5-inch Honduran pine stakes (which are actually half-length tomato stakes). Drive stakes approximately 6 to 8 inches into the soil every 4 to 5 feet in the row. Tie plants with the same twine and in the same manner as for tomatoes, with the first string placed 7 to 9 inches above the soil when plants are 10 to 12 inches tall (before the first fruit set). Run a second string 6 to 8 inches above the first string before peppers enlarge and fall over the first string. For single-row peppers, run a string on one side of the row for about 100 feet, looping and tightening string around each stake as with tomatoes, and then run the string back on the other side of the row using the same procedure. To make harvesting easier, leave 3 to 4 untied breaks every 100 feet or so. If you plant double rows of peppers, use one row of stakes for each row of peppers, and either tie each row separately as in a single row or tie on the outside of each row, creating a box around the plants.

Some growers successfully use an alternate method for both single and double rows by running the second string in the center of the plant canopy of each row, allowing the branches to grow up through the string and be caught and supported by the string.

Remember that stakes should be placed at equal depths to ensure the same final height in the rows, making it easier to operate a sprayer over the row without problems. To ensure adequate coverage of the foliage and fruit, it may be necessary to use longer drop nozzles between the rows, especially with taller tomato plants. Recent research trials in New Jersey, Virginia and Florida have shown that the caterpillar pests of both peppers and tomatoes (beet armyworm, European corn borer, corn earworm, etc.) can be effectively controlled by insectigation (insecticides applied through a trickle/drip system) for the entire season using a material such as chlorantraniliprole (Coragen) or thiamethoxam plus chlorantraniliprole (Durivo), which are labeled for chemigation in both crops.

The disadvantages include primarily the cost of materials and installation (which is labor-intensive), and disposal. It is a common practice to re-use wooden stakes over many production seasons in the field. However, there is a high probability that stake surfaces will become infested with pathogens, especially bacteria. It is recommended that reused stakes be thoroughly disinfected, such as by heat treatments (the most expensive), or by using disinfectants such as commercial sodium hypochlorite (bleach) or hydrogen dioxide (OxidateR).

Dr. Gerald M. Ghidiu is professor in the entomology department at Rutger. The State University of New Jersey working at the Rutgers Agricultural Research and Extension Center in Bridgeton, N.J. He has worked since 1980 as an extension specialist in vegetable entomology. W.L. Kline is a county agent with the New Jersey Agricultural Experiment Station.