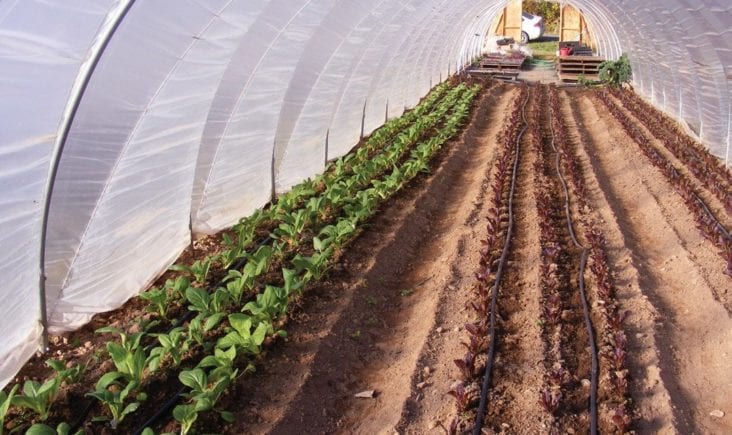 Most growers don’t grow in a climate that allows year-round field production of crops. With cold temperatures limiting the season at both ends, growers have adopted many methods that allow them to continue growing and harvesting crops despite the weather.

In a greenhouse, growers control the environment, providing the proper temperatures, humidity and even light. The goal of season extension techniques is to provide a few extra weeks of growing time outside of the normal season by affecting soil and/or air temperatures just a bit.

“Plants are still susceptible to freeze,” noted John Clendaniel, farm management specialist and Agriculture & Natural Resources program leader at Delaware State University Cooperative Extension. “Most of the season extension techniques are designed to protect from frost so that you can start early or finish late.”

Season extension methods can include using organic mulches or raised beds or planting on plastic to heat the soil more quickly than in the field; using floating row covers to protect from cold temperatures; or erecting low, caterpillar or high tunnels for more protection and flexibility.

These techniques don’t have a secondary heat source, and the limiting factor, aside from freeze, is decreasing daylight. With sufficient warmth, plants may set fruit, but it won’t ripen without enough daylight, Clendaniel said.

Season extension techniques won’t drastically alter the growing environment, so there are limits to how far beyond the normal growing season you can still produce a crop. Even a high tunnel with double layers of plastic will only increase nighttime temperatures by about 10 degrees, Clendaniel explained. The sides should be rolled up during the day to provide temperature regulation and airflow. Ventilation is necessary to prevent excessive heat buildup. Lack of airflow is a concern, as moving air helps cool plants during the daytime, when temperatures are higher, and is also necessary for pollination.

Robert Hadad, vegetable specialist with Cornell Cooperative Extension, pointed out some factors growers need to consider, regardless of technique; these include plant maturity dates. 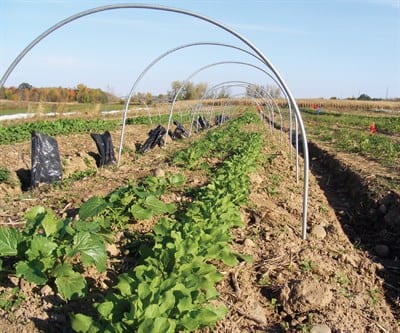 In northern climates, direct-seeded tunnel production isn’t a sure thing, as seed germination may require more heat than can be provided, even when daylight is increasing. Early seeding for some crops is best done in a heated environment, said Hadad.

“With late-season extension, the light levels are much less as it gets closer to December 21, so plants need to be close to maturity when we run out of enough light to promote plant growth,” Hadad explained. “Typically, we are looking for plants to mature in late October or early November. … Clear days and a warmer fall will allow for more plant growth, while a cold, cloudy period will really slow things down.”

The high tunnel is the most extensive and versatile technique. Combining a high tunnel with other practices, such as row covers or mulches, can add weed protection and increase the temperature of the plant environment. Proper siting is key to avoid flooding and torn plastic, and a water source must be available. While high tunnels are typically permanent, and the crop under them is rotated, some can be moved to protect different parts of the field. High tunnels can be sized so small equipment can be used inside.

Other ways to provide protection from cold temperatures include caterpillar tunnels, low tunnels and row covers. Row covers can provide frost protection for early or late-season plants, allowing them to establish early or finish late despite the weather.

According to Hadad, low tunnels work best when used for early-season germination of crops. With added protection in the form of row covers or planting on plastic, getting a head start on germination of more tender crops is also possible. However, tall crops don’t fit well for long. 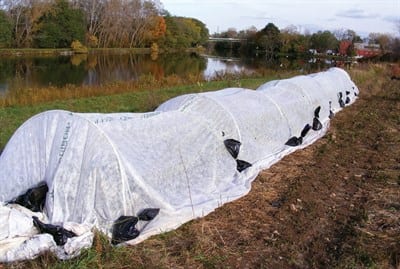 Quick tunnels improve upon low tunnels by adding height, which gives plants more room to grow and allows for more airflow and a larger space for heat buildup. Crops can be harvested later, and they can also be planted later in the field if adequate protection is used.

Caterpillar tunnels, which are large enough to walk under, capture more heat and offer additional options. They are not meant to be permanent and are built with less durable materials than high tunnels. They are used to cover long, single rows. Pest management is more of a concern, as these tunnels can be utilized further into the winter. This type of tunnel requires more labor to set up and provide adequate water and ventilation.

Growers must consider the benefits as well as the possible drawbacks before moving forward with any of these techniques.

A crop’s water and fertility needs are the same no matter where it’s grown. Even when just using plastic mulch, rainwater will roll off the plastic and away from the root zone. Drip irrigation provides water directly to the root zone and is crucial for plant health. A raised bed allows for slightly earlier germination, but will require more water when compared to the same crop planted in the field. That’s water you’ll have to provide.

The simplest season extension techniques warm the soil or protect from cold air temperatures without much infrastructure. Raised beds, organic mulches and planting on black plastic all increase soil temperature and allow for earlier germination, but the plants will still be susceptible to freezing. Adding a row cover or low tunnel can provide protection.

For cool-weather crops, the goal is to keep them from getting too warm in the heat of summer.

“We don’t often think about extending the growing season in the middle of the summer, but we can somewhat by using shade cloth or planting into white plastic,” Hadad noted. “Spring-planted lettuce, for example, can be protected from high heat and the beating sun with shade cloth. Too much shade doesn’t work, but something like 20 to 30 percent shade cover can help.”

While growers can use white plastics to remove heat from the soil, it isn’t really extending the season so much as growing a better-quality plant under stressful conditions, Clendaniel explained.

Hadad added that using a clean straw mulch can provide similar results in most respects.

“During real hot summers, a dramatic difference in plant growth [is seen] when compared to using a black mulch, with the plants in the white mulch filling out more and generally being more productive,” Hadad said. “The trick is being able to predict if it will be a real hot summer or not, so you know which color to use. Some farmers use both to hedge their bets.”

Depending on when you want your crop available for harvest, seeding or transplanting needs to occur at specific times. For example, early spring spinach is seeded in late fall and overwintered for spring production under cover. However, if you desire a late fall harvest of spinach, you need to plant in early fall so the crop can mature before the harsh winter weather. Hadad has compiled a crop chart guide for season extension planting that’s available at http://bit.ly/1pIF4eA.

“For kale, Swiss chard, cutting celery and parsley, it might be a good strategy to get these crops started early … so that you have large, ready-to-pick plants going into the fall,” Hadad wrote in the guide. “These are big plants that can take up room, and if they are not ready to produce, they are costing you money.”

Being prepared to take advantage of good weather, or immediately protect from bad weather, is good management. It’s important to select cultivars that can mature in cloudy conditions with fewer daylight hours, as well as plant them at the right time. Using varieties that are known to do well in extended-season conditions is helpful.

“There are many Asian greens that perform better in warm weather, for example. Some spinach varieties do better in the spring rather than in the colder late fall and winter,” Hadad noted.

Overwintering of some crops may be successful when combining season extension techniques.

“Spinach, Asian greens, kale, chard [and] some lettuces, for example, can be overwintered most years successfully,” Hadad said. “Most of these varieties can take a bit of freeze from overnight low temperatures. Then the next day, with the sun up, they thaw out slowly but are undamaged.”

However, a deep freeze followed by little sun can mean a total crop loss, even with multiple layers of protection.

One advantage of season extension is the relatively low infrastructure cost compared to the added value and price premiums possible. However, researching the market is just as important as growing the crop; the endeavor needs to be profitable. Market demands will differ between market types (wholesale versus direct retail sales) and from region to region, Clendaniel said.

“Having fresh, locally grown vegetables in the off-season demands a higher price. Operating a high tunnel is a valuable piece of real estate, where each square foot requires a much higher return on investment, so all in all, prices need to be significantly higher at the marketplace,” Hadad said.

As a farm management specialist, Clendaniel is concerned with profitability. Increasing a crop’s value by having it available outside of the normal season should increase its price. Having a marketing venue available to you is also a part of this equation, as is being able to supply that market when no one else can do so.

“It increases your season without increasing your overall costs, other than your structural costs,” Clendaniel said. “You definitely are adding extra labor, but increasing the value of the crop by having it available when no one else does.”

Even so, season extension isn’t for everyone. Clendaniel advised figuring out if it makes sense for your farm; that way you can avoid investing a lot of time and labor in something that’s not going to pay off.

“Season extension has its costs. Farmers really need to be aware of their cost of production from the start and carry this over when starting up for season production,” Hadad said.

One aspect of season extension growers might overlook is the logistics of washing and packaging vegetables harvested in the winter. Hadad pointed out that a heated barn would be ideal, so these activities could be done in a warmer environment. Digging through snow to get to a high tunnel or picking vegetables in extreme cold can be unpleasant, he added.

With many consumers no longer in tune with the concept of seasonality, growers who can supply the demand for out-of-season products can control at least a portion of the market that has traditionally been served by growers in warmer climates. Making it viable and profitable is the missing piece of the puzzle.

Tamara Scully is a freelance contributor based in New Jersey. Comment or question? Visit http://www.farmingforumsite.com and join in the discussions.