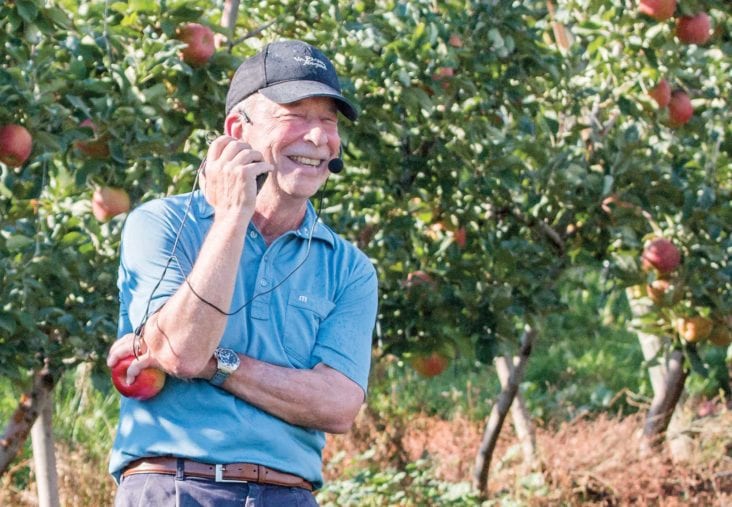 Honeycrisp apples are, without a doubt, a rather recent newcomer to the interesting world of apples. They have quickly become a favorite among the fruit types for plain eating. Their tartness is balanced, with a suggestive sweetness, and who can ignore the snap that occurs when you bite into one. It is a great overall feel during the fall season’s gastronomic experiences. The type of apple was developed at the University of Minnesota in 1960, while it was officially released to both growers and consumers in 1994. The tasty fruit helps to illustrate a common misconception when it comes to genetically modified organisms (GMOs), and those which are developed through the process of hybridization.

How it came to be

Honeycrisp apple was developed by cross-pollination of two already existing sorts of known apples. The first is honeygold, also a cross between the golden delicious and the honeygold, and the Macoun. Although this interesting process may happen naturally through the wind or various pollinators such as bees, the honeycrisp apple was given some help and a push. The honeycrisp trees were hybridized, almost the same as some of the tomato seed in your garden. These, however, are nearly always “sterile” hybrids. They do not produce “true” seeds, or seeds that results in the same hybrid. Rather, they self-pollinate to produce fruit. The honeycrisp seed is also not true, and does not produce like trees. Most of the other fruit trees are propagated through the use of grafting, root-cuttings and layering. The new types can be developed only through cross-pollination, according to David Bedford who is a scientist at the horticultural department of the University of Minnesota. Although the seed is sterile, the already established trees carry true fruit if they are pollinated with a group four of apple pollinators, which includes Fuji, gala, golden delicious and others.

The real evolution of “sweet” apples over the “bitter” apples, like crab apples for example, happened naturally, between four and six thousand years ago. The process of cross-pollination also happens naturally between some plant types and species that are genetically close and accepting of each other. However, the DNA changes in genetically modified plants are forced upon them in a laboratory. Such a change could never happen in the nature immediately, especially not that quickly. It is familiar that dozens or even thousands of years of evolution need to happen before such a change. The results of forcing DNA material into the genetic plan of a plant may have unexpected and undesired consequences. For example, a genetically modified potato that produces its own insecticide might sound like a great idea. In reality however, it proved quite dangerous.

The point of all of this is the following. The next time you see a GMO supporter in the comment section of a blog or a video, or the letters section in a newspaper, that claims how hybridization through cross-pollination, grafting or some other means is the same as what scientist do on the cellular level when forcing genetic material into the DNA of a plant and suggesting how those who are afraid of GMOs are dumb or worse, do not believe it.

The potato example mentioned earlier proves that GMO foods require tests. Once they are tested, the fair dissemination of the results occurs to see what the benefits are, if any. There is too much at risk in these practices, as some past tests on GMO produced foodstuffs have shown us. In addition, the corporations that develop GMO fruits and vegetables have motivations other than just producing a quality product. For example, they aim to create plants that are resistant to herbicides, meaning longer shelf life for the perishable products. One of these are apples that do not turn brown over time. In addition, vegetables that are capable of killing the insects that attack them, like the potato but improved and not harmful for us.

Sometimes, the unstated reason behind it all is to control sales. Finally, seed patents on crops that are resistant to patented herbicides have a lot of big money involved. The honeycrisp was patented by the University of Minnesota, but it has expired.