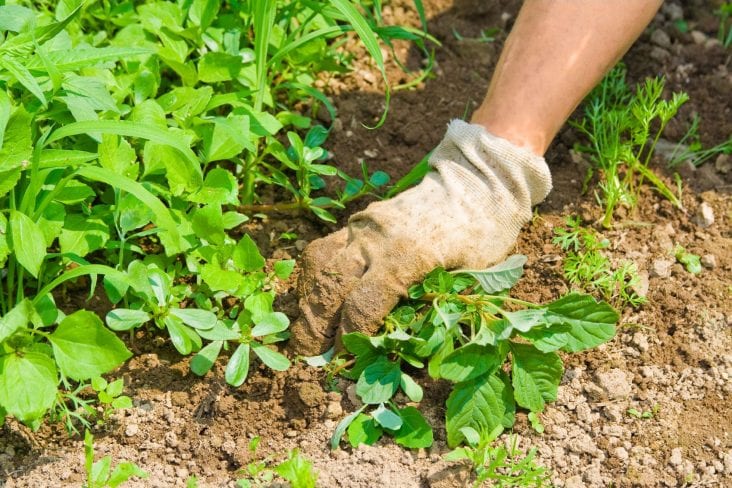 When controlling weeds in fruit and vegetable crops, maybe there’s some truth to the old adage: “An ounce of prevention causes a lot less pain.”

“The best way to control weeds in a garden is to just not let them get started,” said Stuart Sutphin, an Extension agent in Danville, Virginia. “You want to do your soil preparation before planting. Turn the soil over a couple of times, remove any weeds, roots and things like that so there’s good, clean soil in the garden.”

“Herbicides can be an option if they use pre-emergent herbicides, where the soil is treated several months before the planting takes place, and that kills the weed seeds that are present in the soil. Of course, if you use that, you can’t direct-seed the garden. You have to have actual live transplants instead of direct seeding. A lot of these products are similar to crabgrass preventer, which is a pre-emergent that kills the crabgrass seeds.”

Growers should take heed to not spray when the wind is blowing hard because it can cause herbicide chemicals to drift onto other crops, according to a paper by Virginia Tech Extension horticultural specialists Diane Relf and Alan McDaniel. The drift from pre-emergence herbicides also can cause seeds not to germinate. In addition, Relf and McDaniel warn growers not to spray herbicides with the same spray tank that they use for pest and disease control. Serious damage can occur.

Good to have options

Luckily, Sutphin said farmers have at least three options to deal with pesky weeds. (1) They can simply pull the weeds regularly, which he said is probably the most reliable. Growers with large acreage can’t afford to spend the labor on pulling weeds unless they just need something for their workers to do.

“Pull them up by the roots before they become big,” Sutphin said. “If you wait too long, they become established, and it’s harder to pull them out.” He suggests inspecting the field once or twice a week and pulling any weeds that have seeded.

“By the middle of the summer, you’re not getting very many weeds because all the seeds have germinated and (are) pretty much gone,” he said.

A second effective option, according to Sutphin, is to lay down newspaper on the top of the soil once the crop is planted. He advises placing the newspaper about three layers deep or about three pages thick. Also, he warns to avoid newspaper with too much color because the ink could be toxic. Next, he recommends covering the newspaper with about an inch of mulch to hold it down. Good organic mulches include pine bark, pine straw, sawdust, and grass clippings, according to information from Jeff Derr and Henry Wilson, weed scientists with Virginia Tech. Be careful of any mulch that has been recently treated with herbicide, as damage to the plant could occur. Derr and Wilson strongly recommend monitoring soil fertility since some mulch can hold excess nitrogen such as sawdust. The advantage to mulches is that they hold soil moisture, cool the soil and suppress weeds.

Though the mulch is lying over the newspaper, don’t be alarmed. “Air and water will go back and forth through the newspaper,” Sutphin said, “so the plants are still able to get those critical elements. The newspaper will degrade throughout the summer, but it will control the weeds and will prevent weeds up to five months.

“You don’t need to remove the newspaper,” he added. “At the end of the growing season, you just till it right into the soil the next time you’re ready to plant. It’s mostly wood fiber anyway.”

Besides newspaper, he said growers can use weed barriers or landscape fabric. Unlike newspaper, growers must remove the barriers or fabric before tilling the land again, replacing them the next year, the year after and beyond as long as they hold up. “Once again, air and water will pass back and forth through the material,” Sutphin said, “but weeds won’t come up through it.”

A third option and the least desirable according to Sutphin is to put down black plastic or just some type of plastic sheet. Since commercial growers use black plastic regularly, they are sure to install a useful irrigation system, “because air and water will not go through the plastic,” he said. “It can be used in a vegetable garden if you can figure out a way to get the water where the plant roots are.”

Like with barriers and fabric, he said black plastic should be taken up after each season before growers till the land again.

Growers should keep in mind that preventing weeds is part of the prescription to a healthy crop. Don’t procrastinate; be preventive. Once they grow extensively, more hand work is needed to remove them. Don’t let weeds rule you; you rule the weeds.