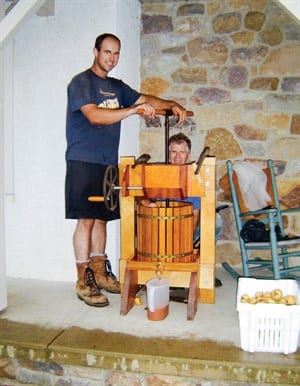 Old Stone Cider, produced by the Gruber family at Old Stone Farm, Landenberg, Pennsylvania, is on the cutting edge of the market.

In many ways, however, hard cider is an old-fashioned drink. Colonists brought the seeds of cider apple trees to this country in their pockets. England, France, Germany and Spain have cider apple cultivars that date back centuries. Despite the drink’s popularity, almost all early American cider orchards were hacked down during Prohibition. Because trees take so long to come to fruiting age, Americans drank beer after the ban was lifted.

For the grower, this means cider apples are not easy to find. Like other fruit trees, cider apple trees come in full-size, semi-dwarf and dwarf types, but within these three size categories, the breeds of trees vary widely in their growing, branching and fruiting habits. 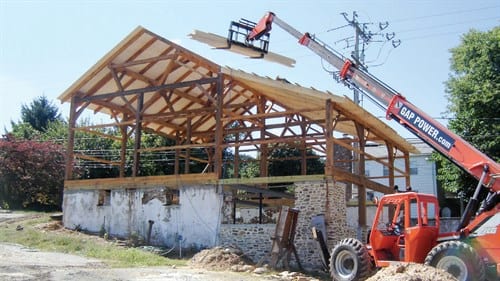 This led to some surprises. Yarlington Mill and Kingston Black apples have produced sporadically and seem to get a late fungal infection the family is still trying to contain.

They ordered 25 Medaille d’Or apples, which promptly died of fire blight. “They’re an extremely astringent apple and if we’d known how astringent at the time, we would’ve only planted one or two,” Mary Gruber said.

They purchased rootstock from Cummins Nursery in Ithaca, New York. The Grubers went with dwarf varieties for ease of spraying, pruning and harvesting and their quickness to mature. They come in Bud 9, G.11, G.16 and G.41 rootstocks, although G.41s are a little vigorous for some tree varieties. 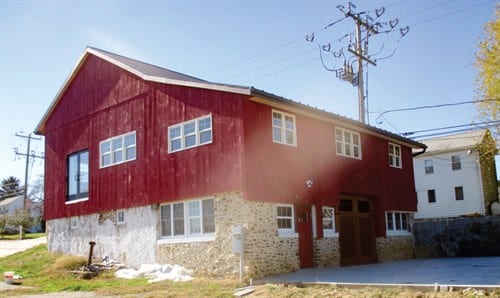 They experimented with grafting their own trees with decent success. Growers interested in rare or heritage varieties can check with Nick Botner, a grower and enthusiast in Oregon, who has over 3,000 apple varieties.

Though it is possible to ferment the juice from eating apples, hard cider apples, unlike eating apples, have higher sugar content and more complexity of favor when fermented. Fermenting with Granny Smith or Mcintosh means one will have to add more sugar and flavorings.

It is easy to get snooty about hard cider and what it’s made from, but at day’s end, you have to sell product. People will buy boxed wine and they will buy $100 Sauvignon Blanc. It depends what part of that spectrum will work best for a given farm.

Once the Grubers chose their varieties, they planted them on a south-facing slope in well-drained soil.

After years of wine grapes, Mary Gruber was emphatic that she had no interest in any labor-intensive trellising systems. So they drove a stake into the ground next to each tree and tied them on to keep them from blowing over in a windstorm.

Irrigation is not a concern in Southeast Pennsylvania so tree spacing only needed enough room to allow them to use Roundup beneath the trees to keep down weeds. 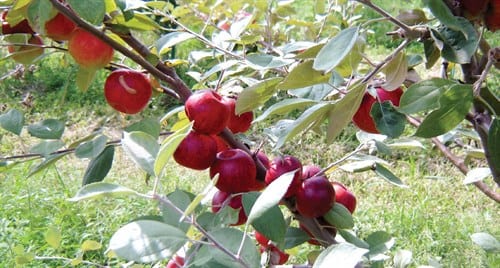 Pruning starts in January and finishes in March or April, depending on the weather and how well the job is done. Good pruning can help keep down disease in an orchard, but because cider apples are not a table fruit, the farmer can tolerate a little more cosmetic damage on the crop.

This is not organic cider. “We do spray a fair amount,” Mark Gruber said. “We keep an up-to-date spray license and use a 200-gallon Pul Blast sprayer we use in the Chardonnay vineyard.”

Fire blight is a fungus that can be cut out. Growers can spray streptomycin during bloom to keep it from being transmitted. Long-blooming trees are more susceptible, as are rapidly growing trees. If that fails, a grower’s best resort is cutting out affected branches and burning them. That can be fairly destructive to a block of trees. 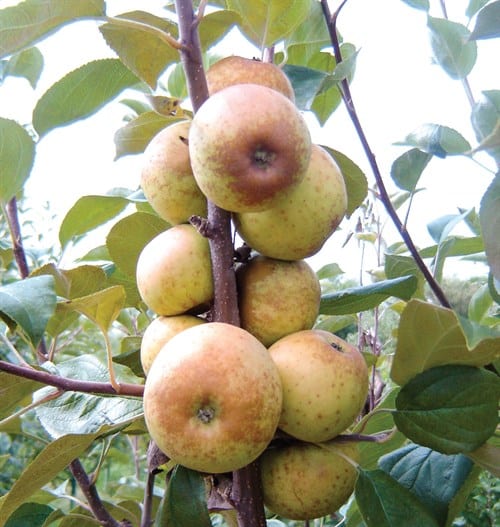 Rosy apple aphid requires a producer to time the spray application properly. The aphid turns new growth into a corkscrew, which isn’t good for fruiting.

To discourage deer, a producer can build fences, hang Irish Spring Original soap from tree branches, get a dog or get a hunter. The Grubers find deer browse more on young trees.

Processing and fermentation involve expensive equipment. Commercial presses can run from thousands to tens of thousands of dollars.

A local Amish farm presses the orchard’s apples. Before moving up to stainless fermentation tanks, they fermented 500 gallons of cider at a time in their living room, using 200-liter plastic tanks. 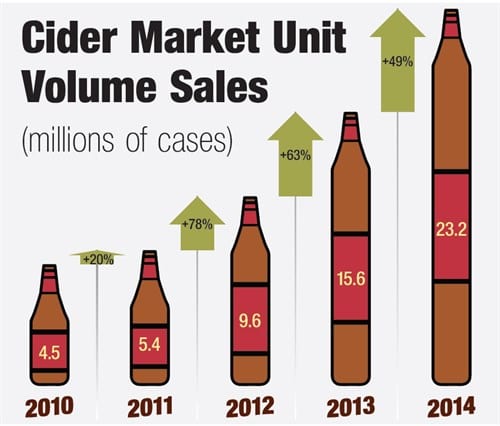 Fermentation takes about three weeks. The Grubers said it is good to give the cider more time for particles to settle out. The cider can be racked off into a second vessel to age. It’s recommended that producers blend ciders after fermented. If the goal is to have bubbly cider, carbonate it as it is kegged or bottled.

Check brix, pH and titratable acid of the cider. Keep good records and track what is going on chemically to make decent, re-creatable recipes.

Almost all cider ferments to 8.5 percent alcohol, but that can vary depending on how much sugar is in the apples.

Some cider makers like to filter residual particulates out of their cider; others prefer a more cloudy or “scrumpy” cider. To filter requires a filtering system; almost all commercial cideries do this. The Grubers do not, contending it does not affect the taste of the cider and no one seems put off by it.

Having a small production volume, the Grubers sell from their sales space – a Pennsylvania bank barn that was rebuilt to be a tasting and sales floor upstairs and a production area in the lower level.

Other good sales spaces may be local bars, liquor stores, events and festivals.

The end market will dictate whether a producer wants to keg the product, bottle it in 12 oz. or 750 ml bottles, or sell it by the growler. Each involves different equipment and containers. Eventually, the Grubers hope to do all three. “The easier you can make it for people to buy your product the better,” Evan Gruber said.

The family invested time in brainstorming about the best way to advertise.

The Grubers started out with a significant customer base of Christmas tree customers, so they do not use much paid advertising. They have a website and a Facebook page. Eventually, they plan to partner with local wineries and brew pubs. Now, their production is small enough that selling out early is a bigger concern than attracting customers.

My family ran across hard cider about seven years before we served our first glass.

My mom and I were between college tours in Virginia and we swung into a hard cider grower’s meeting, thinking it was for sweet cider.

It turned out to be a lucky accident. My parents had recently bought 20 acres next to the home place and were deciding on what they wanted to farm there. Primarily we’re Christmas tree growers but we do side work in Chardonnay wine grapes and grass-fed beef. After seeing the price difference between selling wine grapes and selling the wine, we knew we wanted to sell a finished product.

Our location is driving distance for University of Delaware students and a few wealthy areas of Chester County. Most importantly, it was zoned as commercial land so we could sell on site. The microbrewery trend was catching on and Woodchuck, the first truly commercial American cider, had started popping up at backyard barbecues and at college parties. We had the land, fruitgrowing experience and the customer base. The rest was just hard work.

Licensing is a complicated discussion, but it really depends on what state you’re in. In Pennsylvania, where the Grubers are located, it is important to do the homework before you start making alcohol and selling it to other people.

The first hurdle to getting licensed to sell your own cider is to incorporate to get an alcohol license. The licenses for this cannot be in an individual’s name. The Grubers created an LLC and registered the name “Old Stone Cider.”

To become a cidery, you need a limited winery license from the Federal Department of the Treasury. The paperwork goes through the Alcohol, Tobacco and Tax Trade Bureau (TTB).

In Pennsylvania, a state license is also needed to sell from the Pennsylvania Liquor Control Board (TLCB). This allows the state to collect sales tax on the cider.

Next, the Pennsylvania Department of Agriculture’s Bureau of Food Safety will need to inspect your facility.

In an unfortunate act of bureaucracy, you need a permanent address for your business to be eligible for the Federal Limited Winery License, but a producer cannot begin fermenting in it until you’ve been granted a license.

“We had all our paperwork in order when we applied and it took nine months,” Mark Gruber said. “This means you’ll be in your building for nine months before you can start trying to turn a profit on cider,” he added. “As you might guess, that makes things pretty complicated for people who are renting a production space.”

The final license is the Certificate of Label Approval (COLA). This comes from the TTB. An operation cannot apply for the certificate until it has a liquor license. The certificate is for the label to go on the bottles. A mockup is required for this so TTB can approve it.

A starting grower can do it on his or her own – if patient. Many people simply hire a lawyer.