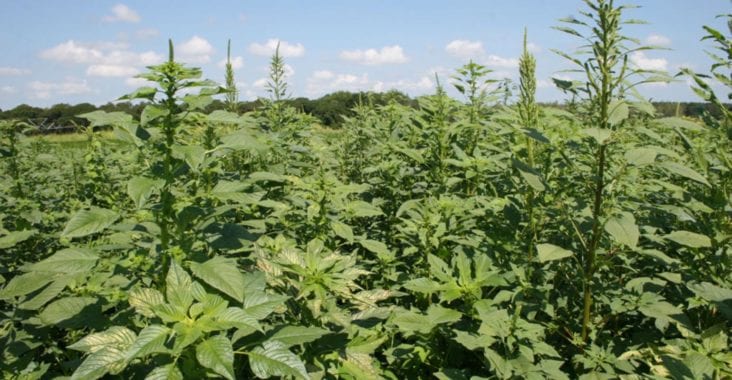 The rise of an herbicide-resistant weed Pigweed, Amaranthus, is a broad-leaf annual that is fast becoming a major problem for vegetable and fruit growers. The plant is reproduced by seeds—in fact, thousands and thousands of seeds—and it appears in all zones of the United States. Identified as an erect annual herb, the weed is branched above, rough and somewhat hairy with a reddish taproot. Leaves are alternate, simple and wavy-margined. Small green flowers grow in dense spikes crowded into a terminal panicle. Common to the plant is the red or pink taproot and a green to reddish stem. Although pigweed has been around for years, it is now becoming resistant to many approved herbicides.

According to a recent report, some growers are calling pigweed the worst threat to crops they’ve seen in a long time. The fast invasive plant grows up to an inch a day, even without water. Being drought-resistant, the plant thrives in hot, dry weather when the temperature reaches the 90s and other plants show signs of dehydration. Highly prolific, each weed produces thousands of seeds per plant, with estimates running from 100,000 to 500,000 per plant. Round seeds are shiny black to dark brown, flattened and about 1 mm in diameter. This means that each plant can produce an entire field of pigweed.

Weed Specialist Dr. Larry Steckel, assistant professor of plant science at the University of Tennessee, has been “absolutely shocked” by how quickly and strongly the resistance has spread. Other specialists believe that the growth of resistance pigweed is much worse than expected. Steckel says this has become a major problem for all growers of vegetable, fruit and farm crops.

This happens when growers are over-reliant on a single herbicide. Plus, using monocrop agriculture in combination with reliance on just one herbicide is exactly what many scientists have predicted would happen for a long time. Combining these two produces super weeds, which makes growers question: Is relying on a single solution, one strain of seed or one brand of herbicide the best choice?

Growers have discovered that even hand-picking isn’t adequate for removing this weed, and chopping off the top encourages the plant to grow back. Also, if any part of the root touches the ground, a new plant sprouts.

Damage to machines is another concern for growers. The large stalk can reach 5 inches or more and can clog up farm equipment during harvest of vegetables.

Identification of the Amaranthus species has caused scientists and plant taxonomists difficulty for many years. One problem is the hybridization that occurs among species, as hybrid offspring from those crosses do not always fit into a category. The following quote, taken from a “A Preliminary Synopsis of the North American Species of Amaranthus” (Uline, E.B. and W.L. Bray, 1894, Botanical Gazette 19:267272) published in 1894 illustrates the difficulty in identifying Amaranthus species:

“Likewise, many of the species approach dangerously near to one another, and the complex question of adaptation and modification of adventive forms together with the still greater uncertainty which prevails in regard to hybridization among certain groups of species have rendered the question of specific limitation one of peculiar difficulty and uncertainty.”

Pigweed grows in most regions of the United States. Redroot pigweed (Amaranthus retroflexus), the most widespread of the species, is also known as rough pigweed or green amaranth. Capable of growing up to 7 feet tall (but usually 1 to 3 feet tall), this plant develops into a coarse, branching, upright plant. A reddish taproot helps identify this plant, as well as the short rough hairs that cover the stems and leaves. At the juncture of the leaf and stem, dense flower spikes with inconspicuous flowers appear.

High temperatures are required for germination (optimally, the 20 to 30-degree Celsius or 70 to 85-degree Fahrenheit range) of redroot pigweed. With these conditions, the invasive weed continues to germinate with adequate moisture in the soil. The plant acclimates to almost any loam and thrives at higher temperatures.

Smooth pigweed (Amaranthus hybridus) can grow 7 to 8 feet high with smooth, deep green leaves and stems. The flowering stem of this weed is longer and more slender than that of the redroot pigweed.

Another species is the prostrate pigweed (Amaranthus blitoides), which forms a 6 to 24-inch mat and contains smooth, branching leaves, with green leaves showing a reddish underside. Flower spikes are formed in the leaf axils.

A round, bushy, branching plant is the tumble pigweed (Amaranthus albus) that grows 6 to 36 inches tall. Green stems produce green leaves that are reddish underneath. Wind easily breaks tall plants, causing them to scatter seeds. It is estimated that the prolific pigweed can produce 100,000 seeds, although most plants growing in crops produce 10,000 to 30,000 seeds.

The Palmer amaranth (Amaranthus palmeri) can grow up to 8 feet tall and crowd out other plants. With a lack of sunlight, plants growing beneath this giant fail to mature, and shorter plants simply can not compete.

A troublesome plant, pigweed has an economic impact on growers of food crops. The plant competes for light, water and nutrients, and if not destroyed before vegetable crops reach maturity, the pigweed overshadows them and causes yield losses. A combination of hot weather and lack of rainfall is an ideal environment for pigweed to crowd out other plants.

A fact sheet by Susan Weaver with Agriculture & Agri-Food Canada called “Pigweeds (Redroot, Green and Smooth)” says that toxic nitrate can accumulate in the stem and branches of pigweed. In high concentration, nitrate can be poisonous to livestock. Severe illness or death in cattle has been reported from infestations in silage corn.

Allergic reactions can result to growers who are sensitive to pigweed. A severe reaction may cause loss of labor and medical expense, other economic impacts.

Weaver’s fact sheet reports that most soil- applied and postemergent herbicides recommended for the general control of broadleaf weeds are effective in controlling pigweed. Herbicide labels do not distinguish between redroot, green or smooth pigweed with respect to efficacy or rate. As multiple flushes of germination can occur throughout the growing season, residual control is advised. Cultivating or hoeing can reduce and/or control young pigweed seedlings. Growers will find that mature plants recover from damage if the taproot has not been completely severed.

The fact sheet also explains that in the northern section of the United states and in southern Ontario, a number of herbicide-resistant pigweed populations have been identified. Atrazine-resistant populations of green pigweed and redroot pigweed were first reported in the early 1980s in southern Ontario. In 1998, populations of both green pigweed and redroot pigweed resistant to ALS-inhibiting herbicides, such as Pursuit (imazethapyr) or Pinnacle (thifensulfuron-methyl), were confirmed in at least seven counties. Atrazine-resistant and ALS-resistant populations of smooth pigweed occur in the eastern United States. A single population of green pigweed resistant to linuron (Afolan, Lorox) was discovered in 1999 in a carrot field near Keswick, Ont. Resistant plants cannot be visually distinguished from susceptible ones.

Rotating herbicides and crops, as well as following other integrated weed management practices will help prevent the spread of the herbicide-resistant pigweed. Check with your state or county extension service for the most effective herbicide for the vegetable crop grown. Follow directions exactly as recommended.