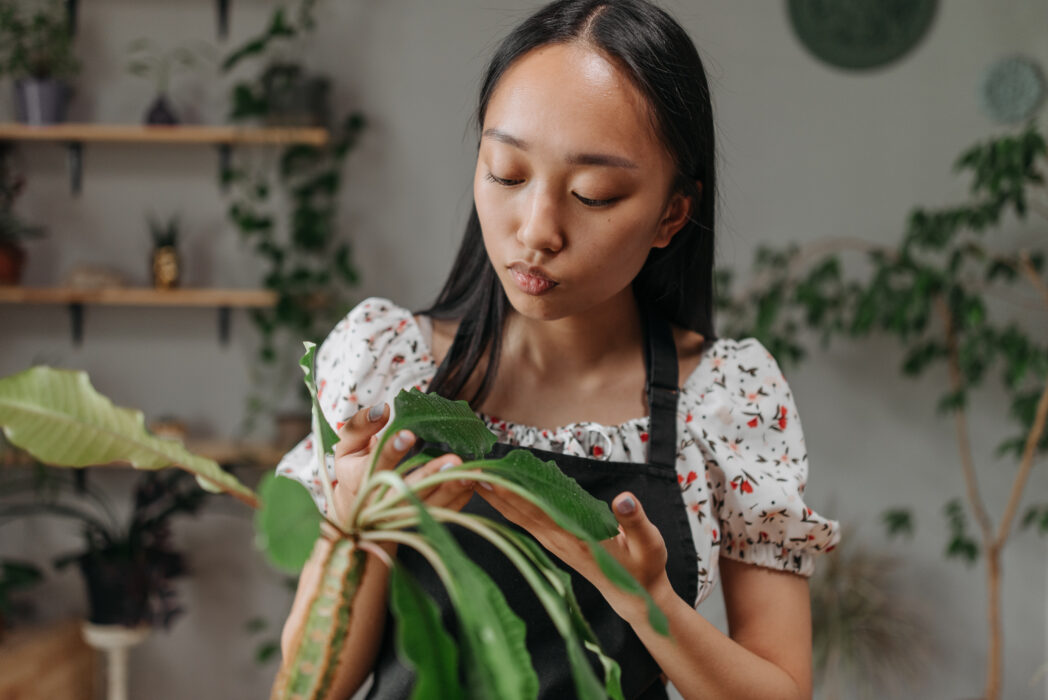 It’s only natural to have a variety of bugs fluttering about in your flower or vegetable garden. The American Gardener explains that some species are friendly, while others are foes that can destroy your plants and crops. Harmful, invasive species have grown in number in recent years due to imbalances in the ecosystem, as well as the destruction of their natural habitats. There are, on the other hand, species that we want to keep within our gardens as they can encourage plant growth — some even prey on bad bugs. To learn how to identify some of the common bugs you should be aware of, read below.

According to the University of Kentucky, aphids are pests that commonly feed on young, green vegetables by sucking on their sap. Nearly invisible to the naked eye, they have pear-shaped bodies, long antennae, and can appear in various colors like black, brown, yellow, or light green. Aphids usually feed in large groups — leaves will curl into a cup and will be lined with aphids. Different species of aphids can be found in specific plants. For instance, there are bean aphids, cabbage, broccoli, and potato aphids.

Repel them: If you have plants that are likely to attract aphids, a weekly examination of plants will help prevent the establishment of aphid colonies. Examine the buds and undersides of new leaves for clusters of aphids. Small numbers can be crushed by hand, or by pruning as they are discovered. If colonies can be found on about 5% or more of foliage, consider contacting a professional to take control and prevent their spread.

Green lacewing adults are light green with long and slender antennae, with long, delicately veined wings that are almost transparent. The body length is about half an inch to a third of an inch long. Typically they feed on pollen, nectar, and honeydew, but they are also the natural enemies of many pests such as aphids, scale insects, caterpillars, and whiteflies. Also called ‘aphid lions’, both adult green lacewings and larvae can be predators.

Attract them: If you have a pest infestation, you are likely to attract the green lacewing, so it would be beneficial to avoid harming them. A study on lacewings found in the Journal of Pest Science revealed that planting flower strips next to green, leafy plants can help attract green lacewings. They can consume over 200 aphids and other prey in a single week, so they can serve as a natural way to control pests.

These blood-sucking bugs thrive in warm temperatures, so the summer can be a worrying season for gardeners. While most tick bites don’t require medical attention, there is still a risk of contracting diseases. An article on Lyme disease published by SymptomFind notes that Lyme disease can develop in multiple stages, ranging from flu-like symptoms in the first few weeks of the bite, and skin lesions in the following months. If left untreated, Lyme disease can cause pain and neurological problems in the future. The biggest culprit is the black-legged deer tick.

Repel them: Ticks like dark and moist areas — be aware of damp firewood piles, dead leaves, and compost bins. Mow your grass regularly, and clean fountains, ponds, or birdbaths often. There are also several plants that can dispel ticks naturally, such as lavender, geranium, sage, citronella, and eucalyptus, among others.

About 25% fewer bee species were found between 2006 and 2015, and this has been a cause for concern because bees are so beneficial to nature. The most familiar ones would be the honeybee and the bumblebee, as well as other wasp-like and fly-like bees. Adults can range in size from 2mm to 4cm. They are dependent on flowers for food, which consists of pollen and nectar, which are both modified and stored as honey in most cases — but their most valuable role lies in their ability to pollinate.

Attract them: In our feature on the ‘7 Ways to Attract Bees and Pollinators to Your Garden’, we point out that bees are attracted to the colors purple, yellow, and blue, so if you have foliage and elements in those colors, you’ll have a higher chance of attracting bees. Additionally, you should plant flowers in your garden that are native or normal to your area, as these are what your local bees will be more familiar with. Bodies of water such as swimming pools or fountains also tend to attract bees.

The Japanese Beetle does not discriminate on whatever type of plant it chooses to feed on, and is classified as a pest to hundreds of different species. The USDA traces its spread back to 1916, from imported produce rooted in soil. These bugs are easily identifiable, often half an inch in length with metallic blue-green heads. They have copper-colored backs and tan wings. Usually, they are found feeding in small groups. If your garden plants have ‘skeletonized’ leaves, then you are likely to see Japanese Beetles in the vicinity.

Repel them: One simple cost-free way is to hand-pick these insects into a container of soapy water. Japanese beetles are easy to see, and although this method may be time-consuming, it’s effective. Neem oil sprays can also deter these insects, especially from roses. Be aware that neem oil may be harmful to aquatic life, so avoid this method if you are near ponds or rivers.

These green caterpillar pests are often found on their namesake, tomato plants. They also feed on other plants such as eggplants, peppers, tobacco, and potatoes. In late spring, adult moths will lay eggs to the undersides of foliage, all of which hatch within a week. These hornworms blend in quite easily with the green foliage and feed continuously, destroying all leaves and fruits in its path.

Repel them: Once again, handpicking is one option, as hornworms can grow up to five inches long. Birds or chickens can feed on these large insects. However, if the hornworms in your garden are too many to handle, you can also opt for insecticides. Usually, these are made to stay on the surface of plants to kill hornworms by contact.

It’s important to identify insects first before you go with your instinct to destroy them, especially since some can be very beneficial. To learn more about other species you might find in your garden, check out our other blog posts here at Growing Magazine.