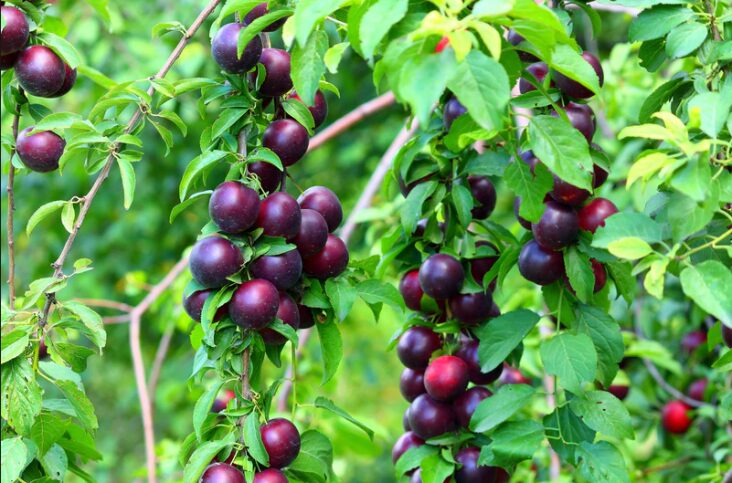 Trees will soon be losing leaves and, in some situations, problems will become apparent. The symptoms are those of black knot, a disease caused by the fungus Apiosporina morbosa. The fungus affects members of the genus, Prunus, primarily plum, and prune. Cherries, peaches, and apricots can also be affected but not normally to a costly degree. Wild plum and cherry along with chokecherry (Prunus virginiana) may become seriously infected and, if close to a Prunus orchard, can play an important role in epidemiology.

The black knot was first reported as a destructive disease in Massachusetts in 1811. It is now present throughout North America but most commonly found in the Northeast.

It is not surprising that this disease can be overlooked until the infection is firmly established, as in most species, it takes about four months for general symptoms to appear and in the case of tart cherry, they generally do not appear until the following year.

It is a disease that once established is very difficult to manage and may result in the trees being removed as they soon become of little economic value.

Knots develop slowly during the first season, but the following spring they will enlarge very rapidly and become covered with conidia (asexual) spores, which are spread by wind and rain. Interestingly these spores are not thought to have a significant role in the disease epidemiology. It is the ascospores (sexual) that are important in disease development. They are not produced until the spring following the second winter after the initial infection. Ascospore discharge is determined by wetness and temperature. Just a few hours of wetness and temperatures in the range of 16-27 degrees Celsius (60-80 degrees Fahrenheit) is enough to prompt ascospore discharge, spore germination and infection of new shoot growth. The knots, if not aggressively managed, become bigger every year and the mycelium spreads internally, resulting in new knots arising some distance from the original one. Over time, the old knots will become necrotic, making ideal sites for secondary pathogen establishment and insect invasion.

Cultural control is very important in disease management and can be quite effective if performed at the right time prior to ascospore release, which in the Northeast occurs usually about bud break. Producers in other parts of the country will need to identify which stage of tree growth corresponds to the weather conditions for ascospore release and prune before this time. Pruning recommendations are to cut 15-20 centimeters (6-8 inches) below the knot as the goal is to remove the unseen mycelium and hence reduce further knot development.

All prunings should be burned or buried away from the orchard site. Scouting woodland areas close to the orchard for black knot and pruning should be done if possible as this can also reduce inoculum. The greatest success will be achieved if cankers can be eliminated when small. When cankers are left unmanaged and main limbs of the tree become heavily infected, removal of the tree may be the only option.

Plum varieties show varying degrees of susceptibility to black knot with European plum varieties tending to be more susceptible than Japanese plum varieties. President shows a high level of resistance. Methley, Milton, Early Italian, Bradshaw, Fellenberg and Shiro are moderately resistant. The Shire, Santa Rose, and Formosa are more susceptible, and Shropshire, Damson, Bluefire, and Stanley are very susceptible. The number of stone fruit breeders in North America is now small, and the emphasis is being placed on developing varieties with resistance to the extremely serious viral disease plum pox so whether new varieties will be developed and released with improved resistance to black knot is unclear.

When it comes to replanting or planting a new orchard, siting is important and should not be established in an area where the black knot was previously a problem. It should also be as far as possible from abandoned orchards or hedgerows with trees with a black knot.

Chemical management of black knot is only useful when combined with pruning as fungicides registered for edible Prunus species will only protect from future infection and not control infections already underway. Timing of applications is critical and needs to correspond with ascospore release, which in the Northeast will normally occur in the period from bud break until just after petal fall. In other parts of the country, the weather will be different and growers will need to design their spray schedule accordingly.

Many experts consider Chlorothalonil fungicides as the most effective with Bravo being an option (http://www.syngentacropprotection.com/bravo-weather-stik-fungicide?tab=details). Growers need to remember that chlorothalonil fungicides cannot be used after shuck-split and therefore for maximum protection, they need to make sure that the shuck-split application is made.

Other fungicide options include Topsin (http://www.upi-usa.com/agricultural-products/topsin) used with Captain (http://www.arysta-na.com/us-agriculture/products/captan/overview.html). Care must be taken early in the season if Japanese or Stanley plums are grown as Captain may cause leaf injury.

Indar (http://www.dowagro.com/en-us/usag/product-solution-finder/fungicides/indar2f) or Pristine (http://agproducts.basf.us/products/pristine-fungicide.html), when applied during bloom can give suppression of black knot but are usually less effective than chlorothalonil.

For the organic grower, the only chemicals available are copper and sulfur/sulfur-containing products, which prior to use should be checked for OMRI certification. These are of limited efficacy; therefore, the organic producer’s main defense against black knot is growing varieties with resistance and being diligent at scouting, pruning aggressively in a timely manner any symptomatic branches and destroying the infected limbs immediately.

Author’s note: The specific directions on fungicide labels must be followed and supersede any statements in this article if there is a conflict. Any reference to commercial products, trade or brand names is for information only.