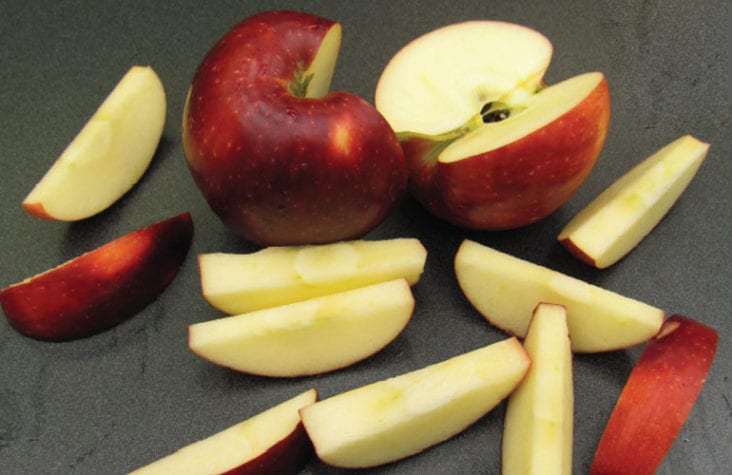 There’s tremendous growth in the apple market, and consumers have more choices than ever before. Those choices are the result of years of consumer research, cutting-edge laboratory work and grower trials.

“Meeting consumer expectations is an important aspect of a variety development program,” said Dr. Kate Evans, associate professor and pome fruit breeder at Washington State University. “People have a baseline of acceptability in terms of overall texture – firmness and crispness. If an apple doesn’t make that baseline, they reject it immediately regardless of any other attribute. But if the apple is above that baseline of firmness and crispness, other attributes – sugars, tartness, aroma – all come into play.”

It’s all in the name

Evans noted that consumers become familiar with apples by name, and they also purchase by name. “We don’t want to put someone off of a particular apple variety because they’ve had a poor eating experience,” she said. “Consumers expect that they can eat apples for 12 months of the year. Seasonality has disappeared, so it’s a challenge to produce the kind of fruit that will be good enough to eat year-round.”

Read about: Beware of Strawberry Anthracnose

While WA 38 isn’t exactly a catchy name created to attract consumers, it’s the kind of name all new varieties are pinned with until it’s time for release. And that release doesn’t happen until researchers and growers have painstakingly ensured that a new apple variety meets certain requirements.

Developing a marketable apple begins with close contact with those who will eventually grow the fruit. Establishing a new orchard is a financial risk, and that risk is even greater with a new variety. Evans says that most apple breeding programs will focus on introducing apple scab resistance into their material, but scab isn’t an issue for Washington growers. “I have some selections for powdery mildew resistance, and some progeny for resistance to fire blight, but those are not a principal target of the program,” she said, adding that growers would place those diseases lower on the priority list.

Storage is key priority in Washington

What is significant for Washington State growers is a high pack-out rate so that valuable fruit is not left behind in the orchard. Evans noted that the state has a massive storage infrastructure and growers want to be able to store and export fruit year-round.

“A primary target of my program is to breed for apples that are not only really good quality, but will maintain that quality throughout storage,” she said. “The grower has to be able to grow it, store it and sell it. They’re not just relying on their own skills as a grower, but also relying on the development of marketing strategy.” 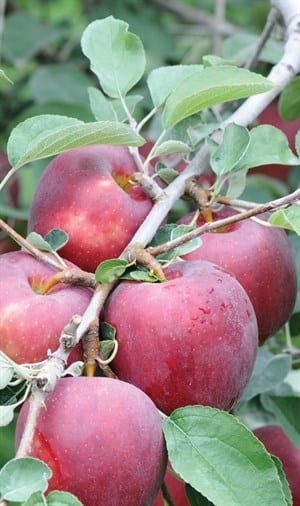 Breeding program broken down into steps

After discussion and input from growers and an advisory committee, the breeding program begins. First, researchers select parent varieties that will fit the target market, based primarily on what is known about apple varieties that do well in the state.

“Over the years, we’ve been able to develop more DNA-based tools that help us understand more about the genetic potential of some parents,” Evans said. “In the past, we’ve used phenotype information (color, russet, and flavor) and now we can get a little deeper and understand more. We can use those DNA tools to give us more descriptive information about the potential parents.”

Next, it’s a matter of traditional crossing – collecting pollen from one parent and using it to pollinate the blooms of another parent. After the bloom makes fruit, the fruit is collected and seeds are removed. After several months of cold stratification, the seeds are germinated in WSU greenhouses. Seedlings are screened for traits such as resistance to fire blight and powdery mildew. At this point, the program becomes more of an elimination process than a selection process. 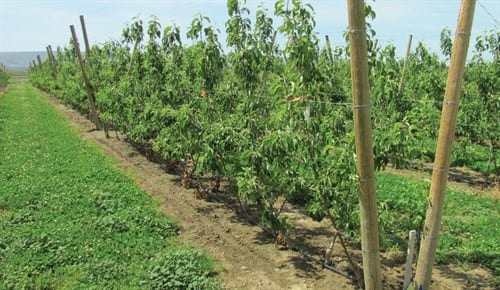 “DNA tools help us to screen seedlings that are only a couple of weeks old to determine which seedlings have the combination of genes least likely to make them successful,” said Evans, adding that those that don’t make the cut are discarded. “It improves the efficiency of the program and improves the quality of material coming out of the greenhouse. Then we don’t incur the cost of growing up all of those additional trees to fruiting maturity before we make decisions about which to throw away.”

Next, seedlings are propagated onto rootstock, usually M9, in collaboration with a commercial nursery. “Then we plant a phase 1 seedling orchard, typically about 5,000 trees annually,” Evans said. “Each tree is a unique, seedling-derived tree, but it’s on a rootstock. We will evaluate those for about four years, then select the best material from that phase and propagate vegetatively onto more rootstock.” 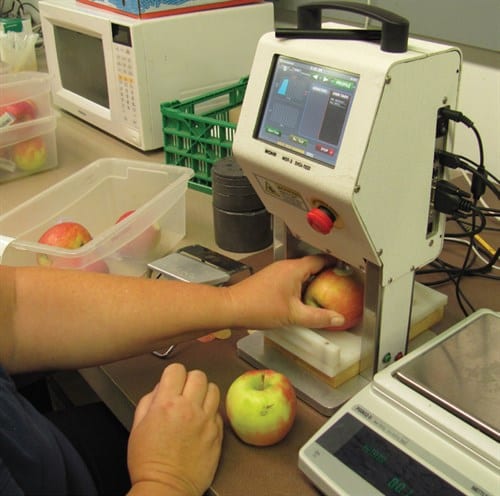 Phase 2, or advanced selection, involves three different trial sites, each with five replica trees of each selection and several standard varieties. “For my program, that phase has two grower sites and a university orchard,” Evans said. “That’s where we collect the majority of data because we’re getting five trees in each of three sites. We can get more yields, multiple pick dates and more fruit storage.” 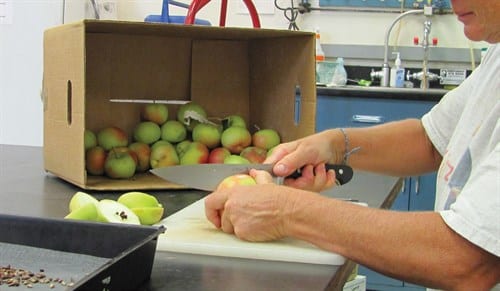 Phase 3, also known as elite selection, is done exclusively out on grower sites. The goal is to establish 75 trees of each elite selection. “That might be only one each year, or sometimes less, because by the time we get to that point, we’re fairly confident about the quality of our selection,” Evans said. “But we need a large volume of fruit in order to start more detailed storage work and to run fruit on a commercial packing line. For an industry this size, it’s important that the material work on the packing line. Certain varieties of apples have failed because they’ve failed on the packing line.”

Evans noted that every time trees are propagated to move from one phase to the next, there’s allowance for the time it takes the tree to grow large enough to support a decent crop load. The goal at this point is to harvest a large volume of fruit for the detailed storage work required by the industry. Apples are tested in cold storage and in controlled atmosphere storage, and also tested with 1-MCP. 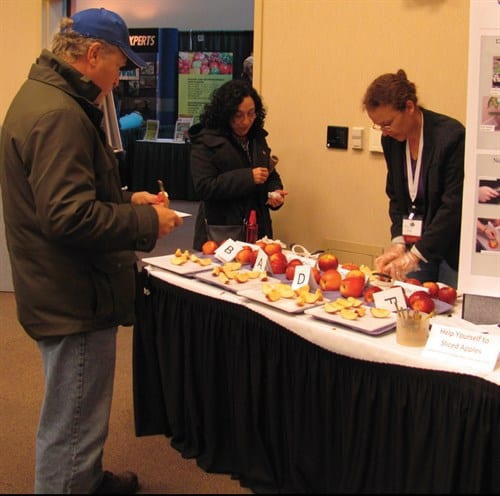 Today, WA 38 has a more enticing name: Cosmic Crisp. It’s the result of 20 years of research, grower input and real-world testing. Evans describes Cosmic Crisp as an apple that has some of the ultra crispness associated with Honeycrisp but with a slightly firmer texture. “It’s a cross between Enterprise and Honeycrisp,” she said, adding that the original cross was made in 1997. “It’s a relatively dark red apple with very good storability, and it will eat well through August and longer.”

Washington State growers will be able to get Cosmic Crisp trees in 2017. “It’s taking that long because we have such demand from the industry to get a number of trees out,” Evans said. “We will release 300,000 trees, and they are already allocated.”

Evans says that although Cosmic Crisp has been developed for conditions and markets specific to Washington, the variety may eventually be available to growers in other regions. “We restrict the varieties that come out of the program for a certain amount of time so that Washington growers who have provided input on the program will have a head start with those varieties,” she said. “After that, there’s potential for trialing outside the state.”