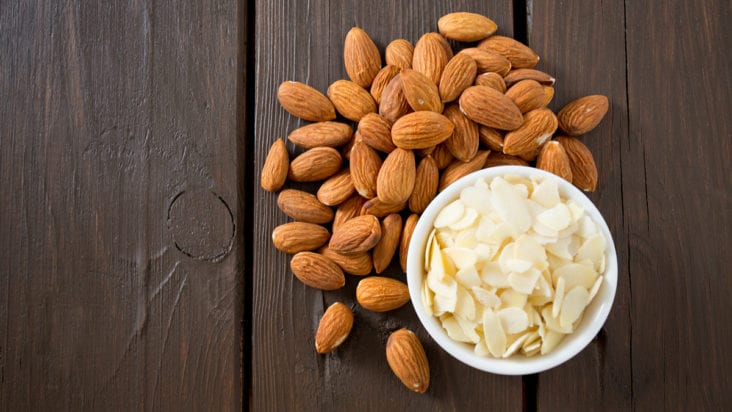 Global warming caused by human activity has intensified California’s multiyear drought. According to a report in the journal Geophysical Research Letters, drying is projected to increase in the future, and as the earth’s surface temperature continues to rise, natural climate variability won’t be able to compensate for the drying effect of global warming. Essentially, even if wet conditions soon end the official drought in California, the state will experience widespread drought-like soil moisture conditions throughout the century. This highlights the critical need for agriculture professionals to have a long-term plan for drought resilience. – California Almonds

Current predictions are that California will receive roughly the same amount of precipitation in coming years, with less snow. This is not good news, unless policymakers can find a way to adapt California’s water infrastructure. As snowpack in the mountains melts, it gradually releases water that the current infrastructure captures and redistributes during the dry summers. This accounts for about 30 percent of California’s water. “If snowpack becomes less reliable, then all Californians – both farmers and nonfarmers – will need to adapt and invest in new infrastructure, additional conservation, new ways of storing water to capture more of the rainfall in the winter for use during the dry season,” said Gabriele Ludwig, plant physiologist and director of Sustainability and Environmental Affairs for the Almond Board of California.

One way to capture rainfall is to store it as groundwater. In 2016, the Almond Board launched a project to assess whether and where almond orchards can be used for groundwater recharge when rivers are running high. The Central Valley could store water below ground if practical ways can be found to:

“We are also trying to understand the opportunities to recycle water from multiple sources, such as municipal wastewater,” Ludwig said.

“The current global warming trends will certainly influence and probably change historical weather patterns. This uncertainty dictates the need to maximize environmental adaptability in new cultivars,” said Thomas Gradziel, an almond researcher at the University of California-Davis. “Historically (and even currently in many regions of the world), almonds have been grown as a dryland crop because of their capacity to produce crops even without irrigation. Almond is thus highly adapted for growth and productivity with minimal water.”

However, summer irrigation greatly increases yield. Gradziel’s greatest concerns about effects of climate change on the global nut industry are sufficient water quantity and quality for irrigation and loss of winter chill hours.

Despite these concerns, the almond industry is currently thriving. Almond experts cite innovation as one reason. “The almond community has invested more than $60 million since 1972 to build a foundation of research on environmental, production and other issues to continually evolve best practices with changing concerns,” Ludwig said.

Increased extremes in the weather may mean growers will need to invest in new varieties that can withstand a greater range of weather conditions. The Almond Board has various research projects underway to help growers.

“Anything that passes muster in the research program needs to be tested in field,” Ludwig said. Variety trials are done with a grower who is willing to work for many years with a complicated orchard setup and with researchers from the U.S. Department of Agriculture-Agricultural Research Service or UC-Davis. It can sometimes take more than 10 years in the field for weaknesses and benefits in a new variety to show up.

One of the Almond Board’s collaborators, Gradziel uses traditional breeding methods to develop rootstocks and scions with traits designed to allow more dependable cropping under variable climates, improve water use efficiency and lower the need for agrochemical inputs. Although almonds need fewer chilling hours than other deciduous fruit and nut trees and will therefore likely be affected more slowly by the decreases in chilling hours, winter chill is required to achieve good flower density and fruit set. Gradziel anticipates loss of needed winter chill will affect orchard productivity in coming decades.

As climate change causes more intense weather extremes, increased pest and disease pressure and limited availability of water, Gradziel expects nonpareil clones, a type of almond with low bud-failure potential, will be most successful for growers. “Nonpareil remains the cultivar to improve on,” he said. “It originated in the 1860s in California as a dryland variety and has since shown exceptional adaptability and productivity across a range of environments and cultural management styles.”

UC-Davis recently released the Kester variety, which exhibits many of nonpareil’s qualities of adaptability and productivity, is fully cross compatible with nonpareil and is less vulnerable to frost damage.

Although the California almond industry has become more efficient, researchers are preparing for the possibility that the crop may need to move to Idaho, Nevada or elsewhere in the U.S. “In the long-term, I expect Kester would outperform many current cultivars in these regions since frost will be more important, and Kester has improved resistance/avoidance to frost damage,” Gradziel said.

To be resilient amidst climate change, farmers across California will need to overcome and adapt. Continued investment in research will fuel the next round of innovation to ensure California’s farmers can continue to grow healthy, nutritious food while improving water efficiency. Although more work is needed to adapt water infrastructure for a future with less snowpack and dryer soil, Ludwig said farmers can do their part to increase water use efficiency. “Eighty-three percent of almond farmers schedule irrigation based on tree need and or soil/weather conditions instead of watering on a predetermined schedule. In addition, almond farmers in particular have adopted efficient micro-irrigation systems at almost two times the rate of farmers statewide,” she said.

As a result of such efforts, almond farmers have reduced the amount of water needed to grow a pound of almonds by 33 percent since 1994.

The challenges almond growers see are the same or similar for other California producers. For example, other crops that require significant chilling hours may not grow in California in coming decades.