“Our regret is that we had not started this business a whole lot earlier in life,” Dorie said. “We moved here from Florida, wanting to start a new business. It had to be outside and with our children. At BelleWood Acres, we are tied to the seasons and love what we do.”

Their passion for farming has grown to include public tours of the apple orchards and their on-site processing and packing facilities, retail farm store and bakery. In 2011, the bakery made 2,500 caramel apples, 1,000 turnovers, 1,200 pocket pies and 1,500 pies that were sold at the retail farm store. 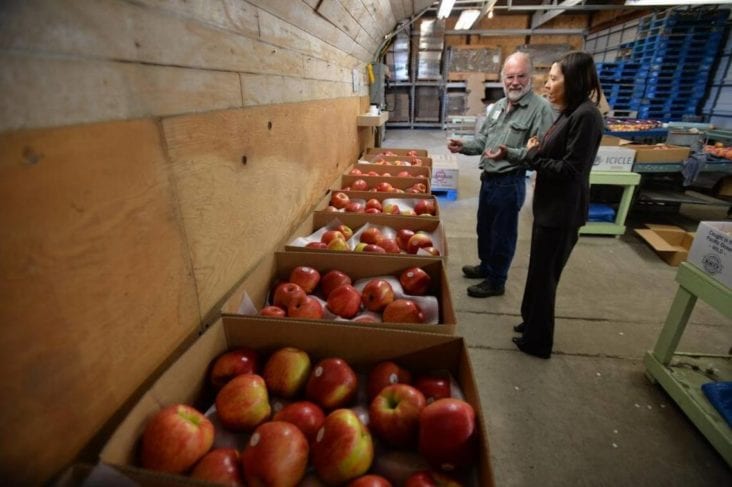 In hindsight, the Belisles wish they had diversified into retail earlier instead of designing the business as wholesale. If wholesale prices go down, the cost of growing and picking may not be covered. Although 25 percent of sales come from eastern Washington packinghouses, the Belisles receive no income until March or April and have no control over that income. They realize that retail diversification of this 25 percent adds to the security of growing their business.

Forty percent of sales come from wholesale business with school districts, local restaurants and local grocery chains. The Haggen grocery contract includes Honeycrisp, Jonagold and BelleWood Prince apples sold throughout the chain, and apple cider that is available at 12 locations in the region. The Belisles also sell apples to Safeway in Lynden and to the two Community Food Co-Op stores in Bellingham.

The Belisles learned how to pack apples for specific wholesale customers. Haggen and Safeway grocery stores prefer the first two pickings of midsized, red apples. These apples grow on the outside of a tree and are almost uniform size. The Bellingham School District prefers smaller apples for elementary schools and larger apples for middle schools. Western Washington University also orders specific-sized apples. Apples that grow in the middle of a tree with less red color and those apples from the third picking are usually labeled seconds. However, secondary apples are full of flavor and perfect for what Dorie calls value-added products that include distilled spirits that will be introduced in 2012.

An on-site, 12,000-square-foot artisan distillery and farm store is being built. The new building will include a tasting room, a larger retail farm store, a deli and a community room, culminating the entrepreneurial dream from growing to retailing. The Belisles envision 80 percent of sales coming from this new enterprise. 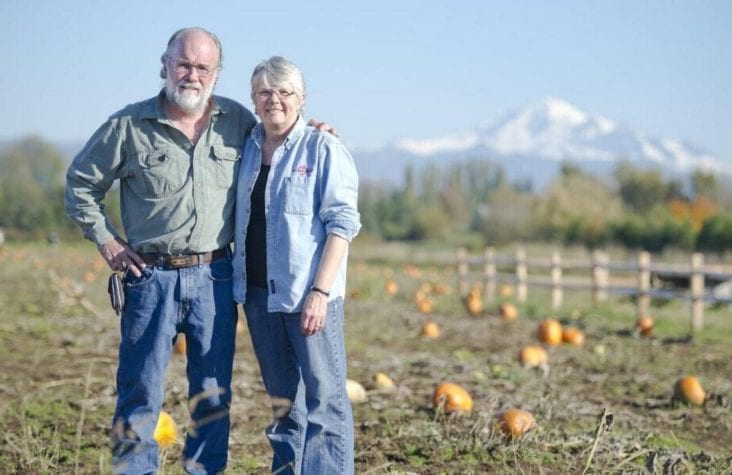 “The more we thought about it, we can sell more of our apple products right here,” Dorie said. “A distillery allows us shelf-stable apple products that we can sell all year long. In Europe, it is common to use leftover apples and produce spirits, such as vodka, gin, brandy and cordials.”

Artisan, small craft distilling is making a comeback after many decades. A new generation of distillers with diverse, high-quality products is emerging. In Washington, the annual distilling license defines craft distilling as an agricultural practice, allowing on-site tasting, sales up to 2 liters per person per day and production of up to 60,000 proof gallons per year.

Vendome Copper and Brass Works of Louisville, Ky. is building two stills. One 23-foot-tall still, called The Column, will be installed within a three-story window niche at the front of the new building. It is located on 17 acres with easy highway access. A large covered patio will offer outdoor dining with views of apple trees, farmlands and Mount Baker.

“To begin, we plan on 2,000 cases of alcohol a year,” John said. “We may partner with local farmers for seconds of apples and with berry farmers to fuse local blueberries or raspberries with apples.”

Among distillery considerations are glass bottle sizes, labels that need to be approved by the federal government, and the menu items for the deli that will complement BelleWood Acres’ products. Dorie wants to cook a soup of the day, including an apple/pumpkin soup made from ingredients grown on the farm. She also plans to buy vegetables, fruit, chicken and beef locally.

Besides on-site retail, the Belisles want to sell vodka to restaurants and pubs.

With the new distillery and farm store will come the need for additional employees, possibly four to five year-round in the distillery itself. Employees currently fluctuate from six year-round employees to 45 during the fall, 20 of them pickers.

In 1995, local apple farmers encouraged the Belisles to grow Jonagolds, the staple variety. The more Jonagolds, the better the negotiations for shipping costs to packinghouses in eastern Washington. However, in 2000, almost 25 percent of Washington apple orchards closed due to customer preference for newer apple varieties. Many apple farmers stayed with Jonagolds and went out of business. Moreover, apple growing had changed from conventional, full trees to dwarf trees that equaled 60 percent more production per acre. Distribution structure also changed. Grocery chains, such as Safeway, Kruger and Fred Meyer, purchased smaller grocery stores and pushed for the consolidation of eastern Washington packinghouses to cut costs.

In response, the Belisles converted a calf barn to a packing line shed in 2002, and John learned the art of grafting. He began apple diversification by grafting Honeycrisp branches onto Jonagold trunks, learning from the Internet and from mentor Tom Sewell, who owned an apple orchard. John eventually grafted 18 more apple varieties.

“The soil had become tuned to Jonagold trees and would have rejected the replacement of Honeycrisp,” Dorie said. “A solution is fumigating and sterilizing the soil. As former pastureland, our soil is rich in nutrients, and so we opted to graft.”

Soil rejection of a related species is called replant disease or sick soil syndrome. The causes are unknown. In the first year a new tree grows poorly. Its weak root system may blacken and fail to establish. One theory is that the original tree houses a menagerie of pathogens that are left in the soil, and the pathogens traumatize the young tree’s immature root system.

The leaf-curling midge is a newer pest that was originally from Europe and arrived via Canada. The midge winters as a pre-pupae or pupae in silken cocoons in the soil or in curled leaves. Eggs hatch, and emerging maggot-like larvae feed on the upper surface of leaves for two to three weeks, especially affecting the growth of young trees. The Belisles have worked with the Washington State University/Whatcom County Extension on integrated pest management of the midge. Midge control includes traps, monitoring and use of natural predators, such as the earwig.

Apple varieties are planted according to micro-soil conditions and microclimates. While Honeycrisp apples are located on the coldest part of the farm, this variety is the most vulnerable. If a cold spell is due, the apples are sprayed with water and coated in ice that maintains the apples around 33 degrees.

Although maintaining and building the business of BelleWood Acres is challenging, the Belisles’ business plan lays out a working farm beyond their lives. They want to maintain and grow the farm’s business to solidify apple agriculture for the next owner to carry on.