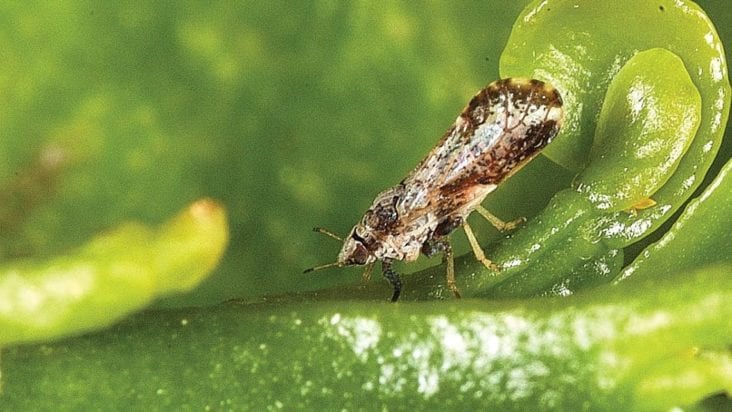 It’s the mother lode of all citrus diseases,” said Dr. MaryLou Polek, vice president of science and technology for the Citrus Research Board, California Department of Food and Agriculture, at the 2014 USDA Agricultural Outlook Forum session on huanglongbing (HLB) disease.

Huanglongbing means “yellow shoot disease.” It causes yellowing and blotching of leaves, along with a tendency of the fruit to remain green on its lower half, which led to the “citrus greening” name.

The next session speaker, Dr. Ed Stover, research horticulturist for the USDA’s Agricultural Research Service (ARS), quickly agreed with Polek on the severity of the problem. Based in Fort Pierce, Fla., Stover said that more than 40 to 70 percent of Florida citrus trees are now infected, and some groves are no longer productive. 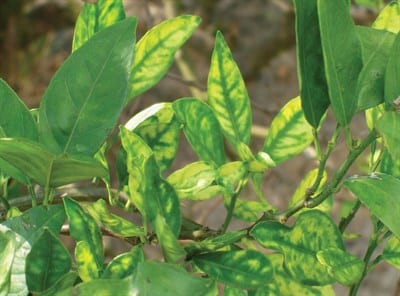 Citrus is the No. 1 fruit enjoyed in this country. Florida accounts for close to two-thirds of the almost 800,000 acres planted. The value of citrus production in the nation topped $3.1 billion in the 2012-2013 season, measured by packinghouse-door equivalents. Almost half is contributed by Florida. Since Florida processes about 95 percent of its oranges, the economic impact to that state is multiplied. Taking value-added products into account, the citrus industry in the U.S. is about $9 billion.

U.S. exports are affected as well. The current world trade forecast by the USDA’s Foreign Agricultural Service estimates a decline of nearly 12 percent in orange juice production for 2013-2014 and a 6 percent drop in orange exports. These reductions are attributed to the highest expectations in 50 years of oranges dropping in the groves. This premature fruit drop is due in part to HLB.

Citrus greening was first identified in Florida in August 2005. Stover noted that the disease spreads rapidly. Within 10 months of finding HLB in a grove with no psyllid control, up to 40 percent becomes infected. In addition to being predisposed to dropping, HLB-affected fruit is small and misshapen, with a bitter off-flavor. 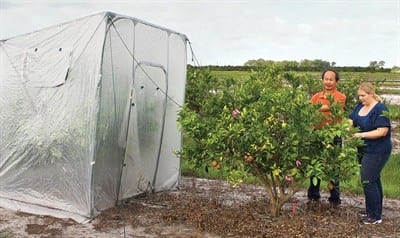 The disease can be difficult to detect during its latent phase, Polek added. Initial symptoms resemble mineral deficiencies, toxicities or other diseases. Also, 30 percent of the root mass can be lost before the visual symptoms develop, which can take years. The weakened trees become an easy target for the invasion of other diseases. Infected trees may die within a few years.

Both Polek and Stover pointed to a key obstacle: The pathogen has not been cultured. It is not distributed evenly throughout the tree. In addition, not every psyllid that feeds on an HLB-infected tree acquires the bacteria – only up to 60 percent carry it, even when the disease is rampant. There are no attractants for the Asian citrus psyllid and no early infection detection methods.

According to University of Florida (UF) researchers, the disease has cost the state more than $4.5 billion in lost citrus production. Many speculate that unless it’s controlled, HLB will wipe out Florida’s citrus industry in a decade. Although not yet creating the devastating effects seen in Florida, the Asian citrus psyllid has been found in other citrus-producing states.

So far, the pest has been controlled in Arizona. California and Louisiana have the psyllid, but to date only one HLB-positive tree in California has been diagnosed, and it was destroyed. Texas has widespread psyllids, and a small number of groves have reported HLB. Hebbar charted the CHRP’s active quarantine program in place for these and neighboring states for both the Asian citrus psyllid and the citrus groves. Restrictions involve prohibition of transporting citrus plants into or out of the quarantined areas and other strict requirements.

Growers cope with aggressively applied pest controls, insecticide soil drenches and foliar nutrient enhancement programs. ARS researchers, led by pathologist Dr. Yongping Duan and working with the Florida Department of Agriculture, have been able to curb HLB by heating potted citrus seedlings in greenhouses. This thermal treatment has rid the seedlings of citrus greening symptoms for at least two years.

In field trials, encasing HLB-infected trees in plastic tents for two days in the sun has prolonged productivity. Duan reported, “We can’t guarantee 100 percent elimination, but it can keep production up for longer periods.” The University of California, Riverside, has mass-reared and released the parasitic wasp Tamarixia radiata. Polek reported that it demonstrated good evidence of parasitism in Southern California.

Stover has pointed to considerable resistance in the citrus gene pool. He reported that the close relative Poncirustastes terrible, but is one of the most resistant to HLB and the psyllid. Some citrus varieties – many tangerines, for instance – show fewer HLB symptoms than sweet orange. Also, some rootstocks may deliver scion tolerance. UF’s Institute of Food and Agricultural Sciences just approved the release of UFR-17 rootstock. It has conferred both reduced frequency of scion infection and reduced greening symptoms once infected.

USDA programs under way include the HLB Multi-Agency Coordination Group, which helps coordinate research and provides tools for citrus growers. Updates and other information can be accessed at http://www.usda.gov/citrus. Save Our Citrus (http://www.saveourcitrus.org) is the APHIS program designed to convey the seriousness of citrus greening to consumers.