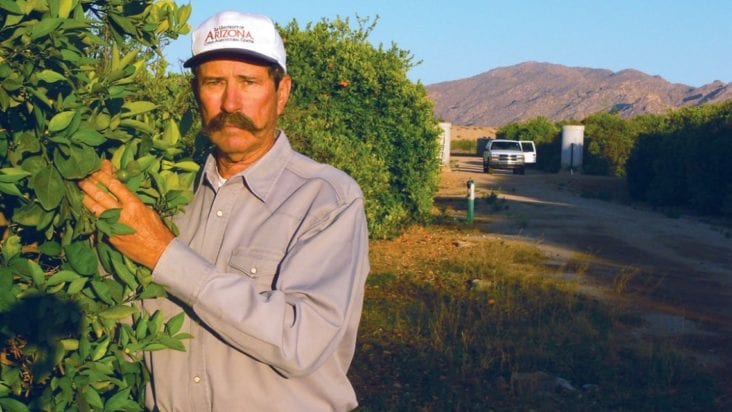 Truman Ranch II (http://u-pickcitrusaz.com/truman-ranch) offers Phoenix-area residents and visitors the opportunity to enjoy a tradition once common to the valley: picking fresh citrus directly from trees. Truman and his wife, Carol Truman, have completed their second year operating Truman Ranch II, from December to March, as a pesticide-free, you-pick business.

While Arizona’s saguaro cactus plants are protected and relocated when displaced by development, citrus groves and ranches often go by the wayside. Add to that the operating costs associated with small agricultural operations, and most of the ranches and other small businesses rapidly disappear as development encroaches upon rural areas. Much of the valley long ago gave way to urban expansion, with houses, shopping malls and highways replacing citrus groves and small ranches, making Truman Ranch II unique in the area.

For the orchard to be successful, Truman must use creative approaches to challenges such as labor issues, grove variety diversity, irrigation costs and damaging freezes. “With a year-to-year lease, I must use caution with cost inputs, and so far traffic for this citrus has not been knocking down the gates to get in here,” Truman noted. “I’m confident we will grow with time and exposure,” he added.

A fourth-generation Arizonan, Truman, 65, earned a degree in agriculture from California Polytechnic State University. He grew up with citrus farming and lives on the farm his father launched in 1947. Cotton and about 80 acres of citrus were grown on the family farm, Truman Ranch, after Truman’s father first planted citrus trees nearby in the 1930s. Armed with the degree and a family background in Arizona citrus farming, Truman launched his ag career in Hawaii in citrus and cattle operations.

He returned to Arizona and a University of Arizona (UA) position in 1988, and was on hand when the UA research grove was planted in 1989. Truman helped in developing a number of irrigation improvements and citrus varieties, and assisted with growing operations. He was farm manager at the site from 1998 until UA closed the research grove in a budget-cutting effort in 2009.

Following the closing of the UA research site, Truman worked for UA Extension for a year before retiring. The research grove was leased by UA from Maricopa Water District, and Truman continues that lease agreement on a year-to-year basis. Initially, the Trumans operated the grove as a commercial operation, selling to various small local grocers in Phoenix. The couple converted the grove to a primarily you-pick operation two years ago.

Truman Ranch II offers a range of citrus varieties. More than a dozen varieties of navel oranges include Chet Hoel (developed in Mesa, Ariz.) and U of A #2. Cara Cara, the world’s only red-fleshed navel orange, is also offered, as well as numerous varieties of sweet orange, Valencia oranges, pink and red grapefruit, hybrid grapefruit, mandarins, limes, kumquat, tangelos, lemons and pummelos.

The orchard is flood-irrigated as water enters from the riser.

Changes in immigration enforcement resulted in a lack of crews available to pick citrus, spurring the switch to a you-pick operation. The grove is about 85 percent you-pick, and a small amount of citrus is picked and sold to Mexican restaurants in Phoenix.

Truman cited a significant obstacle to commercial operation of the site: “The grove is too small and too diversified to operate as a commercial operation.” While diverse varieties were essential in the grove’s function as a research site, the diversity does not provide sufficient quantities of individual varieties for commercial sales. While still somewhat limited, customer response to the switch to a mostly you-pick operation looks promising.

“The citrus grove is completely equipped with micro sprinkler irrigation,” Truman noted. “Micro sprinkler systems require intense management.” Since Truman operates the citrus grove alone, he could not manage the attention required to maintain micro sprinkler irrigation. Flood irrigation requires less intense management and effectively irrigates the grove. Liquid fertilizer is added to the irrigation water before the water is delivered to the grove. Truman operates the grove as pesticide-free. “Typically growers spray one or two times a year; we don’t do that,” he said.

Although freezes aren’t common in the Phoenix area, recent winters have brought damaging freezes. “Growers are always pushing the envelope and taking chances by growing citrus in marginal weather areas,” Truman said. “This past January we had four nights in a row of 22, 21, 24 and 23 degrees [Fahrenheit]. I was running water those nights, alternating fields all night long to get some heat spread around the entire farm as best I could. I estimate that I lost about 30 to 40 percent of my crop, mostly navel oranges and kinnow mandarins.”

UA had two wind machines located at the grove while it was a university research site. While the machines mix warmer air in an air inversion situation and produce several degrees of warming, the costs are high. Truman cited other freeze protection approaches. “We keep a clean grove floor so the soil can absorb as much heat as possible during the day to release it at night,” he explained. The selection of more frost-tolerant citrus varieties also helps.

Specialty crop marketing is always challenging. “We are primarily growers struggling to be creative about marketing our crop without dumping a bunch of cash into the project,” Truman said. “The farm and land surrounding us is owned by Maricopa Water District and has an approved development plan on all of it. This means the district will sell the land when the time is right, and we will be gone.”

Since Truman Ranch II is a pesticide-free operation, occasionally the citrus skin may be less than perfect. Educating customers goes hand in hand with marketing and convincing people that citrus that looks less than perfect tastes just the same as perfect-looking citrus. During the season, when the grove is in operation, Truman Ranch II maintains a prominent display table offering samples of freshly picked citrus – an effective way for people to learn how good it tastes.

The website was recently developed to promote the orchard, and advertising is done through newspaper and radio ads.

Attracting customers to the farm site is another challenge. “We are isolated; we’re the only farm on the road,” Truman said. He’s tried setting up street signs to guide customers to the you-pick grove, but street signs are prohibited by Surprise city code and had to be removed. He is looking for support from the city, hoping that it will allow him to post some signs. He said, “That would help tremendously.”