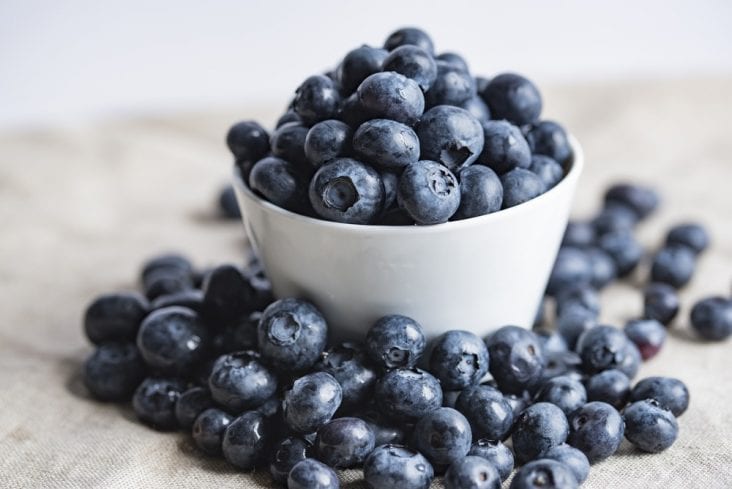 Mary Ann Lila, director of the Plants for Human Health Institute at NCSU, says blueberries contain a variety of phytochemicals that may help people with cancer, cardiovascular disease, diabetes, and obesity, to name a few.

Mary Ann Lila has never met a blueberry she didn’t like. In fact, if she had her way, every American walking down the street would be popping blueberries into their mouths rather than nutrient-devoid, carbohydrate-dense food.

Berries are a nutritious fruit with a variety of health benefits, and her research will help producers grow a better berry. Fantasy? Not really. Reality is just around the corner, and Lila, director of the Plants for Human Health Institute at the North Carolina State University (NCSU) research campus in Kannapolis, N.C., is leading the way in this berry research.

The root of her obsession

Lila first became interested in berry research while living in Wisconsin, where lots of cranberries grow. Through cranberry research, she realized the beneficial bioactive properties that berries represented for good human health. Her discovery was similar to what broccoli is to carcinogenesis and what soy means for women’s bone health and strength.

Through further research, she learned that berries, especially blueberries, offer a host of phytochemicals that can help guard against cancer, cardiovascular disease, diabetes, obesity, urinary tract infections, and a whole spectrum of health disorders. Lila wondered how one little berry could do all those things. “It’s really because, like most berries, it has such complex phytochemistry with different groups of phytochemicals – chemicals within the fruit,” she explains.

She says blueberries evolved to develop a chemical resistance to pests as a protective mechanism. This was necessary because of their attractive, sweet nature. “This particular group of berries just came up with such a cornucopia of defenses that it makes them particularly intriguing to scientists, nutritionists, and health care professionals because it really has demonstrated efficacy against so many human ailments,” Lila says.

NCSU, in cooperation with Appalachian State University, recently finished a chemical trial on blueberries and their effects on athletes. Researchers found that blueberries improved athletic performance and fought off infection after athletes were stressed out from exercise.

“Those are pretty impressive things that you wouldn’t even think about a blueberry being able to do, yet it’s very well-demonstrated that the group treated with blueberries had those properties. The group that was treated with the placebo did not. It’s just because of that complex of different phytochemicals inside the berry,” Lila says.

Lila says for most people it only takes half a cup of blueberries a day to remain healthy. “The thing that’s amazing is that’s not much at all,” she says. “That’s so easy to incorporate into oatmeal in the morning, or cereal, or throw on top of a salad.” How many blueberries are needed differs, depending on whether a person is trying to live a healthy lifestyle or to counteract cancer or cardiovascular disease?

Lila has conducted blueberry research in places such as Australia, New Zealand, and Africa. She did research in cooperation with Massey University in New Zealand that focused on the bacterial effect of berries on the stomach. “Of course, as you know, there are 10 times more bacteria in your gut than there are cells in your body,” she says. “We’re hosting a heck of a lot more of these critters than anybody realizes, but most of them are good.”

She says berries are able to modulate bacteria populations in the gut and tilt the tables on bad pathogens such as E. coli. The berries turn pathogens into good bacteria or active probiotics, which allow for easier digestion. A person feels naturally fuller longer. Lila says this feeling leads to people eating less between meals, which can help control weight gain.

Lila says her future berry research will go in two different directions. The first focuses on a campus-wide initiative to sequence the entire blueberry genome, or genetic code. About 22 students have already started on this initiative, she says. The students will also sequence strawberries, oats, and broccoli.

Cracking the genetic code will give researchers the opportunity to “breed a better blueberry in a very regulated way,” Lila says. “It’s not just trial and error; you know what genes you’re looking for.”

Charles Warlick, a lab technician for Mary Ann Lila, takes an assay to determine the antioxidant radical absorbance capacity of blueberry materials he has extracted.

This discovery can lead to medical breakthroughs and better blueberry varieties. “We know from the diabetic work, for example, that if you ingest blueberry extract your blood glucose levels within six hours drop dramatically. They drop as well as if you take metformin, which is the drug of choice for a diabetic person. So you can do the same with this pharmaceutical drug as with just a self-treatment of blueberries. That’s an important finding.”

In the course of this research, Lila says they found one particular anthocyanin – among 27 different pigments inside the blueberry – that helped reduce blood glucose levels better than others. Free sugars are not beneficial in the blood of diabetics, so identifying the genetic code could allow breeders to “select for blueberry lines that are higher in this particular species of anthocyanin,” she explains. “In other words, breed a blueberry that’s higher in what you need to reduce your blood glucose levels.”

The second area of focus for her research is to develop functional foods for people who can’t always buy fresh fruit. Lila says, “A lot of the work we’re doing now at the institute is how can you capture not just the nutrition, but [also] the health-beneficial phytochemicals in that blueberry? How can you capture it in a shelf-stable form that can be eaten as a snack food?”

NCSU and Rutgers University are working in cooperation to develop a proprietary process to capture juiced berries in an edible protein. She says examples of edible proteins include soy flour and peanut flour.

“We’re able to complex berry juices with the flour and actually make flour that’s colored and captures all of the health-beneficial phytoactives that are important to human health, yet they’re not going to rot as a berry would or deteriorate in your refrigerator,” she notes.

The berry-infused edible protein powders would survive longer than the typical growing season because they would last year-round at room temperature. This sounds futuristic, but Lila says researchers are close to developing a model. In fact, they are creating possible partnerships with some U.S. food companies and the U.S. Army for when the product is ready for market. She explains that soldiers can’t take fresh fruit in their ration packs without the fruit perishing, but they can take a snack bar with an edible protein infused with blueberries that gets into the bloodstream quickly to guard against the effects of high stress and infections.

In the future, Lila hopes the institute can commercialize these blueberry products, especially for athletes and for those needing medical supplements.

Blueberry growers can also benefit. “This line of research is going to increase demand big-time because you’re going to get berries into food diets where berries have never been able to go before,” she says. “Once people see … the evidence that [berries] improve human health, they’re going to buy it, because people want to be proactive about their health.”

Julie Woodcock, an executive coordinator of the North Carolina Blueberry Council, says, “An enormous demand already exists, and it increases as the global market expands.” According to the North American Blueberry Council and the U.S. Highbush Blueberry Council (USHBC), blueberry consumption has increased from 283 million pounds in 1995 to 853 million pounds in 2011. Consumers are eating more because they are low in fat, full of dietary fiber and an excellent source of manganese, and they contain 14 milligrams of vitamin C per serving, according to the USHBC.

Woodcock says the NC Blueberry Council promotes blueberries through funds for marketing and specialty crop block grants. Currently, the council is funding a blueberry plant researcher at NCSU’s Horticultural Crops Research Station in Castle Hayne, N.C. The council also works in partnership with NCSU to fund blueberry research. “Our growers have vigorous marketing strategies with their distributors that include an in-store promotion that is direct to the consumer,” she says.

Bill Cline, a researcher and extension specialist with NCSU, believes growers and grower organizations are currently promoting blueberries effectively at the national, state and local farm level. He says, “I think the role of the grower is to support the existing promotion and marketing efforts, and, more importantly, to be a good steward of the land using sound production practices. Ultimately, the best promotion tactic for a grower is to produce a high-quality product that is attractive to the consumer.”

Lila says another way research helps growers is through better varieties. Breeders can adapt varieties specifically for North Carolina, other parts of the country, and even different countries that aren’t normally able to grow them. “It gives the grower something that is a premium crop to grow,” she adds.

When selecting varieties to grow or for breeding purposes, Cline says there are four important characteristics to consider:

1. Quality: “Blueberry breeders are constantly developing new cultivars with improved appearance, taste and shelf life, and as a result, many older cultivars have been phased out due to their lower fruit quality. So any new cultivar will have to be competitive in terms of fruit quality [stem scar, berry size, color, flavor, shelf life],” Cline says.

2. Machine harvestability: While growers still pick fresh-market blueberries by hand, Cline says machine harvesting has caught on for the fresh market. He believes any newer cultivars must be bred so they can be machine-harvested.

3. Regional and site adaptability: “Blueberry cultivars vary in their winter chill requirement and in their adaptability to different soil types and conditions,” Cline says. “Cultivars developed in Michigan, for instance, are not suitable for Florida, so there will continue to be a need for cultivars that are adapted to local climates and growing conditions; therefore [there’s] a need for state or regional cultivar development programs. Ideally, cultivars would have broad adaptability to different climates, soil types, pH levels, and moisture conditions.”

4. Self-fertility: Cline says most blueberries are “partially self-infertile,” so insects must pollinate them. He says, “A self-fertile cultivar, perhaps even one that could set fruit in the absence of insect pollinators, would be desirable.”

Woodcock says future varieties will appeal to growers if they taste good and are aesthetically appealing to consumers. She says researchers are working on varieties that will fill both those requirements.

Future research should also look at “varieties that are disease and pest-resistant, and resilient to environmental anomalies such as drought and temperature changes,” Woodcock adds.

Lila’s obsession with blueberries has expanded into some extraordinary research that may change the way we look at berries and create a potentially bigger market for blueberry growers. With that in mind, how can we not become a fan of blueberries?