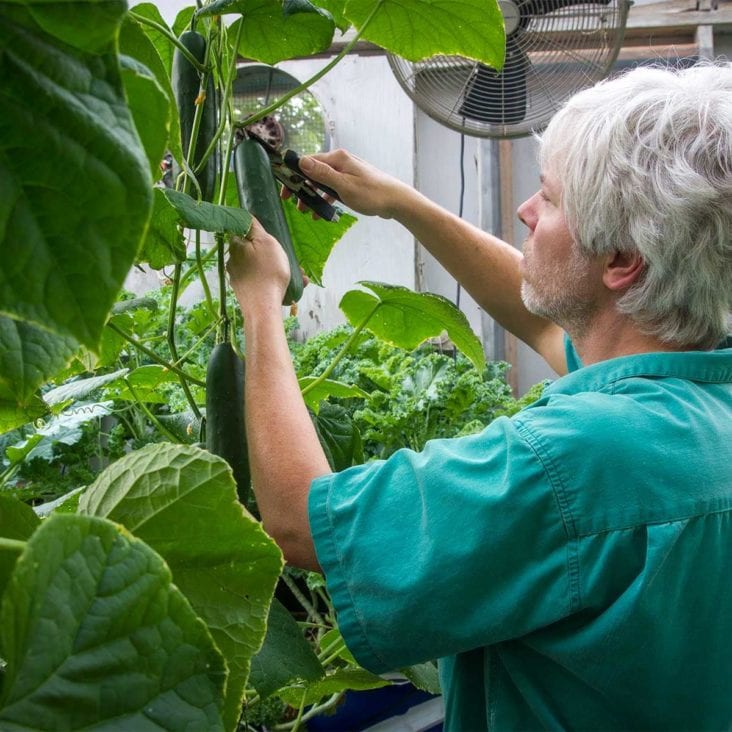 With the cucumber business racking in $300 million from pickling and fresh-market cucumbers, the industry is full of opportunity for producers who apply the proper techniques to produce these vegetables. – Cucumber Growing 101

Regardless if the chosen cucumber is intended for the fresh market or for pickling, cukes require a specific environment to properly grow. According to Penn State University, the soil pH must be tested prior to planting, with results being adjusted to achieve a pH between 5.8 and 6.6. Warm weather is a must. Cucumbers need growing temperatures to fall between 65 and 95 degrees Fahrenheit.

To ensure warm growing weather, planting takes place in April for most U.S. regions. This means that harvest takes place mid-July to the beginning of August. It is vital to ensure cukes are not affected by frost, a serious issue that can result in stunted cucumber growth.

In addition to good soil pH, cucumbers must be grown in fertile, well-drained soil, according to Extension experts from North Carolina State University.

Fresh market or slicing cucumbers often are produced under plastic. For pickling cucumbers, plastic mulch is not used as often as in the fresh market since a major reason for mulching is to help avoid blemishes on the cucumber. If the cuke is going to be chopped and diced into pickles or relish, aesthetics are not critical.

NC State recommends planting seeds at a depth between 1/2 inch and 3/4 inch. Drop seed any deeper and the cucumbers will have a tough time emerging.

For slicing cucumbers, seeds are planted in single rows on top of plastic beds 9 to 12 inches apart with the rows being given 4 to 5 feet of space on either side. Penn State notes that a successful strategy for planting pickling cucumbers is to establish three-row beds where rows are 26 to 28 inches apart and plants are 2 to 3 inches apart in the row.

Once cukes are planted, threat of disease and weeds is severe. Proper care of cukes to protect from disease should be top priority.

For slicing cucumbers, use of plastic mulch will greatly help eliminate the weed threat. For pickling cucumbers, herbicides will work when good crop rotation is also used.

Although weeds can be problematic, insect pests are a much greater threat to a good crop if they are not properly managed. Integrated pest management (IPM) works. According to NC State, “IPM is designed to keep pest populations below economically damaging levels by using selected control tactics, including certain cultural practices, plant resistance and chemical and biological control.”

With many pests, especially diseases and weeds, growers must use preventive control strategies to eliminate potential for infection before the crop is established. In contrast, most insect pests can be controlled after a field is infested and scouting fields for presence of economically damaging insect populations is one way to eliminate unnecessary pesticide applications.

For most pests of cucumbers, a combination of one or more strategies is required for successful control. The crop must be closely monitored to determine the need and timing of various control practices.

One true nemesis is the cabbage looper, which has potential to cause serious damage to cukes each year. To properly identify presence of cabbage loopers, look at the cucumber plant’s leaves. Cabbage loopers will feed on the underside of leaves until they are skeletonized.

According to the University of California (UC), the cabbage looper has many natural enemies that frequently keep it below economic levels, unless they are killed by insecticide applications. Important parasitic wasps include the tiny egg parasite (Trichogramma pretiosum) and three wasps that attack the caterpillars (Hyposoter exiguae, Copidosoma truncatellum and Microplitis brassicae). The tachinid fly, Voria ruralis, also attacks the caterpillar.

In some areas, the nuclear polyhedrosis virus, an important biological control agent, occurs naturally in fields and kills loopers that it infects, UC experts report. Cabbage loopers are not the only serious pest. Cucumber beetles are just as serious if found. According to UC experts, the damage caused by cucumber beetles can be horrific.

Cucumber beetles are serious pests of smooth-skinned cucurbits, including cucumbers and several varieties of melon such as honeydew, Crenshaw and casaba.

While adults prefer tender, succulent portions of plants, including flowers and leaves, which they may destroy with feeding, it’s the damage to the surface that reduces marketable yield. Vegetable growers should note that the cucumber beetle also spreads squash mosaic virus.

When attempting to control cucumber beetles, biological control, while an option, may not be sufficient in controlling the population. Using insecticides will greatly help control problem insects.

The younger the cukes, the higher the risk of being attacked by melon aphid. These small, green aphids can be a major problem on young plants where they feed near the tips of runners or in growing points. They cluster in numbers on the underside of growing leaves, distorting and curling the leaves and producing a large amount of honeydew.

Fruits become coated with the sticky secretion, creating an environment favorable for the development of a sooty mold. In addition they vector a number of viruses. In the San Joaquin Valley, this aphid can vector cucumber mosaic, zucchini yellow and watermelon mosaic viruses, among others. These virus diseases may be more destructive to crops than direct aphid feeding.

Several other aphid species cause similar injury as well as virus transmission. The end result of feeding by this aphid is loss of vigor, stunting or even death of the plants. Melon aphids will feed on cantaloupe, honeydew melon, casaba and Persian melons, watermelon, cucumber and squash, according to UC specialists. If this pest is found in early spring, the lady beetle will provide sufficient control. Wasps can also work alongside lady beetles to control the problem. But neither will stop virus transmissions from the aphid.

“Fields infested with melon aphid should be disced or plowed under as soon as harvest is complete,” reported UC experts.

If biological controls are not working, there are cultural options to prevent plant loss. These can be used when melon aphids appear and also at time of planting.

As soon as this aphid is noticed, UC advises growers to remove and bury the few severely infested plants as they appear in spring. This helps prevent rapid spreading of the aphid population.

An option to prevent melon aphid outbreaks, especially in desert production areas of California, is to apply row covers (plastic and spun-bonded materials) at planting and gradually remove them at first bloom or earlier if needed. Row covers are not recommended by UC Extension for the San Joaquin Valley.

Do not remove the entire plastic row cover at once because drastic reduction in humidity will shock plants and can lead to collapse. Instead vent covers and remove them gradually. Covers made of spun-bonded materials do not need venting because hot air can escape.

Lay silver reflective plastic mulches at planting, which help plants get off to a healthy start and are effective until expanded foliage covers the reflective surface. Reflective mulches need to be removed in desert areas when summer temperatures are excessive for optimal plant growth.

However, in California’s Central Valley and cooler areas, mulches have not caused plant damage; in fact, they improve soil moisture and nutrient retention, which may further aid plant productivity.

Throughout the season, preserve habitat for beneficials around the field and limit dust to encourage parasitism and predation. If populations are high enough to produce large amounts of honeydew, fruit will need to be washed off.

By mid-July to early August, it’s time for harvesting.

For the slicing cuke market, cucumbers should be harvested when they reach 1 to 2 inches in diameter and roughly 7 inches in length. At this point, hand harvesting is recommended.

“Proper instruction and careful supervision of the picking crew is essential to the success of any harvesting operation,” report NC State experts. “Postharvest quality control begins in the field.”

Growers should have someone supervise the picking operation at all times. Harvested cucumbers should be handled as gently as possible and never be allowed to remain in the sun for extended periods.

To cool both pickling and slicing cucumbers fast, NC State recommends hydrocooling with chilled water for pickling cucumbers; however, forced-air cooling has been used successfully where hydrocooling is unavailable.

In absence of sophisticated cooling arrangements, growers often resort to drenching the fruit with cool well water to prevent the build-up of respiration heat in bulk containers or loads.

For pickling cukes, machine harvesting is an efficient way to bring in the crop. NC State reports that production of once-over harvest pickling cucumbers requires precise cultural management practices quite different from those required for hand-harvested pickling cucumbers.

It starts before the season. A grower should choose a well-drained, uniform field with sandy or loamy soil to allow the crop to develop uniformly and assure that machine operations are possible following a day with significant rainfall. Also, those soils are not as likely to cling to fruit.

If harvesting is delayed, crop value can be drastically reduced because cucumbers can oversize quickly.

High plant populations of 50,000 to 70,000 plants per acre are recommended to concentrate the number of fruit for a one-time destructive harvest.

Higher plant populations will increase plant competition for water and nutrients. Thus, a grower must have irrigation that can be applied in a timely manner.