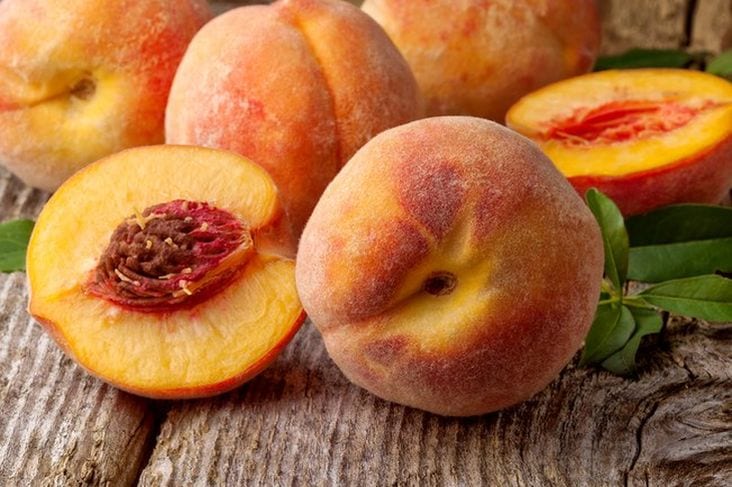 No matter the industry, in business there’s always an advantage to being first on the market. In peaches, growers receive prices that are at least twice as high in the first few weeks of the season as they get during the main part of the season. Toward the end of the season, prices rise again, as many areas cease production due to frost or other environmental concerns.

When peach breeders realized one particular region had the potential to be first on the market with peaches, they recognized an opportunity to help growers there through variety development. The area spans from northern Florida and extreme south Georgia all the way to Brownsville, Texas. Dr. Wayne Sherman, of the University of Florida, pioneered the breeding of new varieties for this niche industry in the 1970s. USDA Research Horticulturalist Tom Beckman has led the program since the mid-1990s.

The connection between breeding & timing

Early-season peach production in the Southeast began with two unique varieties that had been spun off from other breeding programs in Florida and California. These varieties were solid enough to help south Georgia and north Florida develop a viable early-season peach industry, enabling growers to get the product on the market about four weeks ahead of middle Georgia. (The industry represented only 5 percent of the acreage in Georgia. Yet it represented about 10 percent of the value because early-season fruit is worth so much more than mid and late-season fruit.) However, these varieties were not ideal for the region. One was suited to a lower chill zone than that of middle Georgia, where the majority of the state’s peaches grow. The other variety was suited to a higher chill zone and wouldn’t crop reliably in Florida. There the trees didn’t get enough chill, bloomed really late and wouldn’t set well. This created issues with fruit shape, among other things. The burgeoning industry was threatened by the age of the varieties in use.

Today, growers of a variety of crops are finding heirloom varieties more attractive for disease resistance, as well as for products with richer flavor, color and unique characteristics. However, this was not the case for early-season peach growers in Georgia and Florida. The desirable qualities of the old varieties were outweighed by:

Prevalence of “split-pits,” that broke like shrapnel once the peach was opened;

The tendency to soften prematurely in the ripening process;

Imagine biting into a ripe peach. It’s soft; it’s sweet; it’s juicy. You may need a napkin to catch some of the nectar. This is the quintessential peach, but it is not all peaches. Among peach breeders, this soft, juicy goodness is referred to as “melting type” flesh. There is another type of peach with what is called “non-melting type” flesh, which is generally grown for canning and processing. Fresh fruit retailers and processors have different needs, and never the twain would meet, until recently.

Researchers don’t know why, but it has been well documented that early-season fruit softens much more rapidly than mid and late-season fruit. Fruit firmness determines harvest time, but firmness is not the only indicator of ripeness. In early-season fruit, this indicator can be misleading. The consequences of picking a peach early include smaller size, lower soluble solids (sugar content) and lack of red color. Any or all of these issues detract from the marketability of the fruit, so waiting until the last possible minute to harvest will yield the best results for both growers and consumers.

Peaches must have sufficient firmness to make it to market. “We aren’t exactly gentle with these fruit in this industry,” confesses Beckman. “We don’t tray pack our fruit in single-layer trays. They’re almost always put in random fill, bulk boxes.”

To address concerns about firmness, Beckman and Sherman (now retired and succeeded by Dr. Jose Chaparro) bred canning-type germplasm with the varieties that were currently in production. Their intention was to combine the non-melting flesh, which is more resilient and softens much more slowly, with the sweetness of peach varieties that thrive in mid to late season, and the environmental requirements of the early-season peaches already grown in the region.

By incorporating the non-melting germplasm, the researchers brought early-season peaches to the point where one could determine ripeness at a glance.

“You’d hand it to someone (at least in 1995), and they’d handle it like an egg,” laughs Beckman, “but then they’d realize it was still very firm. They could have fragrance, the sugar, the color, and the ground color and the peaches looked dead ripe. But you could still handle them. Now, it’s one thing to do that and hand it to a roadside sales point. It’s another thing to do that and hand it to a broker for the grocery stores who are scared to death of a ripe-looking peach, fearing that they won’t have the ‘legs’ to hold up in transit and distribution.”

Nearly 20 years later, the USDA is still trying to spread the message among shippers and retailers that handling early-season peaches are no longer a risk. According to Beckman, the first two varieties that made a big wave, Gulfking and Gulfcrimson, have been well received. Beckman expects Gulfking to knock out its predecessor, Flordaking because Flordaking peaches don’t look ripe, even when they’re completely ripe and too soft to handle. “Gulfking looks so much better, and they are better quality. For early-season fruit this is a big help,” he says.

Gulfking and Gulfcrimson are superior in many ways to their predecessors. One trait is questionable: these early-season varieties are what breeders refer to as “clingstone.” With clingstone peaches, it’s hard to separate the pit from the fruit. Cut a ring around most mid and late-season melting peaches, and the pit will fall right out. Cut a ring around early-season fruit, and the pit stays attached to the flesh.

“We’ve been told that the clingstone trait and the resilient flesh of non-melting types are problems,” reports Beckman. “But when you put these fruit – melting types and non-melting types – in front of taste panels, they always prefer the non-melters. Why? Because they taste better.”