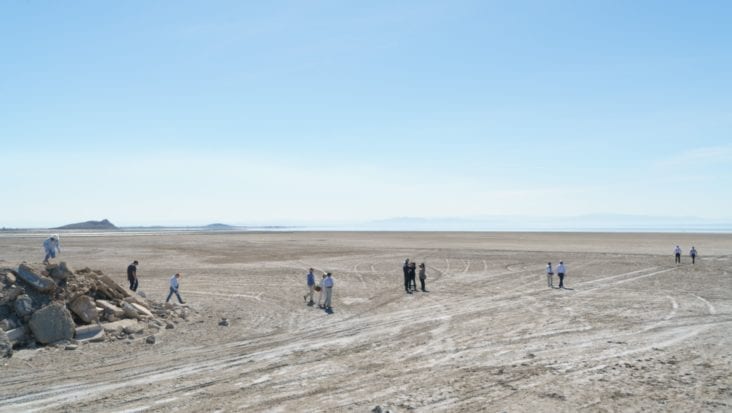 One of the sweetest fruits you may ever taste is grown in a desert valley about 100 miles east of Los Angeles, Calif. The Coachella Valley, located in the desert at the northern end of the enormous Salton Sink, has the best climate of any place in the United States for growing dates. In this man-made oasis, the date industry has been a significant player in the economy and the growth of the region since the early 1900s. The date can be round, but is more often elongated in shape, is about 2 inches long and grows on a palm tree, the Phoenix dactylifera.

Dates most likely originated in the ancient Middle East, having been cultivated for many millennia, and even today remain a staple of the Mideastern diet.

Researchers and businessmen began to recognize the similarity of the California Salton Desert climate to that of the Middle Eastern climate as far back as the mid-1800s and began growing the palm from seeds, using the limited amounts of water found in the area. It wasn’t until 1949, when the Coachella Canal, part of the All-American Canal, began delivering water, that the industry really took off. Much of the successful commercialization of dates worldwide can be attributed to the research conducted in California at the agricultural research station set up specifically for date research. Over the years date palms have been planted in Arizona and Texas, but the unique climate that best fits the needs for growing the best dates in the United States is in the Coachella Valley.

Date palms can be grown from seeds, but for any commercially successful variety of date palm to propagate, “offshoots” from a mature tree must be dug up and replanted. Growing a new date palm from a seed more often than not results in a tree that’s not true to the parent variety. Offshoots are essentially suckers that grow up from the roots at the base of the mature tree’s trunk. The offshoots must be several years old before being disturbed and must be carefully dug up so as to not damage the root system.

According to Richard Thomas, produce manager of L&G Desert Store in Indio, many varieties of dates have been developed and grown in the Coachella Valley over the years, but the most produced date is the Deglet Noor. Offshoots of this variety were brought from the Middle East to California nearly 100 years ago. It is harvested as a dry date, which makes it versatile for processing and marketing, and allows it to be mechanically pitted and ground into date sugar or date paste and used in a multitude of recipes. Dry dates can be stored for many years and need to be rehydrated before eaten.

In 1927, a soft variety called the Medjool was being seriously threatened by disease in Morocco. The Medjool is considered to be the sweetest and most premium of all dates grown anywhere. A sultan who owned many thousands of the date palms allowed 11 offshoots to be taken to America, where they were transplanted and studied for a number of years. Since then, the Medjool has flourished in the Coachella Valley and much of the Medjool production today is exported to the Middle East.

Thomas says the Medjool is a soft-skinned date that can be eaten right from the tree and keeps well with refrigeration. The Medjool can be eaten plain or stuffed with nuts, dipped in chocolate or even wrapped in bacon and fried. He also describes the Barhee, another popular variety that is large and round, as being similar in flavor and sweetness to the Medjool.

Date palms are dioecious, meaning there are male and female trees. The male trees provide the pollen, which must find its way to the flowers on the female trees. In the Coachella Valley, the trees bud in March and are hand-pollinated by work crews called palmeros, who either climb or are lifted into the male trees to collect the pollen in baskets or bags and then scale the female trees to dust the flowers with the pollen. Nature does a poor job of pollinating the flowers on its own. Insects such as bees or flies are of no help. In ancient times, pollination was dependent upon the wind. The male trees are arranged around the perimeter of the groves and the pollen from one male tree can pollinate about 40 females. Date palms must be five years old before they are commercially productive and they don’t become fully productive until they are about 10 years old. Mature trees can produce 150 to 200 pounds of dates per year.

The date palm needs copious amounts of water, but also needs to be in a climate nearly devoid of humidity and rainfall for the fruit to grow and ripen. A crop of dates requires over 9 acre-feet of water during the course of the growing season. (One acre-foot of water amounts to over 325,000 gallons.) Date gardens have about 50 date palms per acre, making the water requirement for a single date palm around 60,000 gallons of water per year.

In California, water usage and water politics is a hot topic. The competition between urban water needs and agricultural needs continues to grow. According to Russell Kitahara, a director on the board of the Coachella Valley Water District (CVWD), the day is still coming when the economic impact of the state’s agricultural water needs must be weighed against its growing population. In 2007, over 30 million pounds of dates, worth over $40 million, were grown in the Coachella Valley—number three in economic value in the valley, behind table grapes and bell peppers.

Water conservation, both agricultural and municipal, is nothing new in California. However, it has been difficult for the date industry to implement drip or micro-irrigation systems like other crops. The vast majority of the date gardens must still be flood-irrigated due to the sandy soil in which the trees grow. Drip systems are only used in heavier soils in the area, says Kitahara. Date palms require a deep root structure to support the tall trees and drip irrigation doesn’t allow deep enough water penetration in sandy soils. In an effort to reduce evaporation and retain ground moisture, ground cover crops are often grown in the gardens.

It takes a lot of work to get a good date crop and the extreme desert heat doesn’t make things easy. Mature date palms can easily top 80 feet in height and new palm branches grow continuously from the crowns of the trees. In February and March of each year, the old fruit stems and the thorns on the new fronds must be removed by machete prior to pollination. The thorns can grow to several inches, posing a significant hazard to the palmeros. Thomas describes the thorns as being big enough to puncture a car tire.

It takes six to seven months for the fruit to ripen and harvesting begins in the fall. As the date bunches grow and increase in weight, they may be tied to the tree’s branches for support. The growing fruit is covered with bags to protect it from birds, insects and dirt. While the dates are growing, the palmeros thin them out so a desired size and quality of date are attained. As the trees get taller, ladders are permanently attached to their trunks. Once the soft dates such as the Medjool begin to ripen, the palmeros pick them several times to get the prime, ripened fruit. The bunches are gently shaken over baskets to collect the fruit as it falls. The Deglet Noors are harvested later in the fall when they are dry, and the entire bunch is cut off at that time.

Thomas and his family have owned L&G Desert Store for many years and sell a large variety of fresh fruits and vegetables. The dates are packaged in plastic trays for display at the store. For larger customers, they are packed and shipped in 11 or 15-pound boxes. Thomas estimates he sells about 20,000 pounds of dates throughout the year. Many of the dates grown in the valley are sold wholesale to large retail chains.

Thomas sorts and grades his dates, and they are continually refrigerated until ready for sale. He noted that recent concerns over produce contaminated with E. coli or salmonella have not been an issue with dates. Due to their delicate constitution, dates are handled carefully and are not subjected to sources of potential contamination, such as water and machinery, the way many ground crops are. Dates are also often fumigated once they’re picked so problems with worms or insect infestation are rare.

There are a variety of markets for dates, says Thomas. He tends to focus on the fresh retail date market. Much of his business comes from winter tourists who vacation in the Coachella Valley or take up residence in nearby Palm Springs. People who like dates keep coming back year after year, he said.