The application of nitrogen fertilizer, whether as a synthetic input, manure or organic leguminous cover crop, is so common in agriculture that many growers believe it is an absolute necessity.

But not everyone agrees. Jack Kittredge, past policy director of the Massachusetts chapter of the Northeast Organic Farming Association, said bacteria fix nitrogen from the air for plants to absorb, provided the soil is healthy. This process, called nitrogen fixing, has enabled agriculture for millennia. “Anyone who thinks synthetic nitrogen fertilizer is necessary is not dealing with healthy soil,” he said via email. “It is the use of synthetic chemicals that has destroyed much of the biology in the soil. The result is lifeless soils that can no longer perform vital functions.”

The necessity of nitrogen fertilizer isn’t just an esoteric debate; it’s critical to sort out in our changing climate. Though media widely report the warming effects of carbon dioxide on the atmosphere, few outlets mention that the impact of 1 pound of nitrous oxide (N2O) on warming the atmosphere is almost 300 times that of 1 pound of carbon dioxide (CO2). Nitrous oxide molecules stay in the atmosphere for an average of 114 years before being removed by a sink or destroyed through chemical reactions. Further, the microbes that convert soil nitrogen to nitrous oxide “don’t much care where their nitrogen comes from,” said Michigan State University’s distinguished professor of ecosystem science Phil Robertson. “So pound for pound organic fertilizers like manure result in about as much nitrous oxide emission as synthetic nitrogen.” 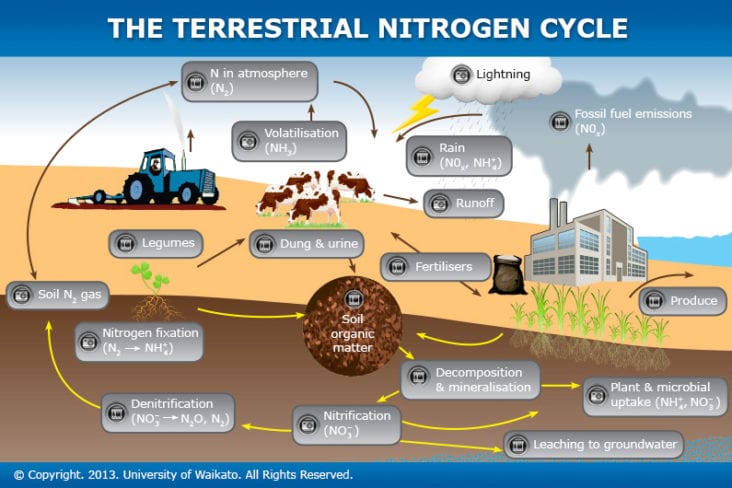 The same appears to be true for the nitrogen in legumes, although cover crops may prevent some nitrous oxide emission in the fall through spring period by capturing soil nitrate that would otherwise be emitted as nitrous oxide. Experimental work on this point is scant, Robertson noted. “The basic general fact is that the more inorganic nitrogen there is in soil, the more nitrous oxide will be emitted.”

Nitrous oxide accounts for about 6 percent of all U.S. greenhouse gas emissions. The gas is naturally present in the atmosphere as part of the Earth’s nitrogen cycle and has various natural sources. However, the EPA reports human activities are increasing the amount of N2O in the atmosphere. Agricultural soil management is the largest source of N2O emissions in the U.S., accounting for about 74 percent of the country’s total N2O emissions in 2013. Nitrous oxide is also emitted during the breakdown of nitrogen in livestock manure and urine, which contributed to 5 percent of N2O emissions in 2013.

How to lower nitrogen emissions

Adopting management practices that foster soil health can help to keep nitrous oxide out of the atmosphere. In her report, “The Living Soil: Bacteria” for USDA’s National Resources Conservation Service, Elaine R. Ingham described one aspect of the science behind healthy soil. “Mutualist bacteria form partnerships with plants. The most well-known of these are the nitrogen-fixing bacteria… Some of these species are important to nitrogen cycling and degradation of pollutants,” she stated.

Bacteria alter the soil environment such that it will favor certain plant communities over others. Before plants can become established on rocks and other geological surfaces, the bacterial community must establish, starting with photosynthetic bacteria. These fix atmospheric nitrogen and carbon, produce organic matter and immobilize enough nitrogen and other nutrients to initiate nitrogen cycling processes in the young soil. Then, early successional plant species can grow. As the plant community is established, different types of organic matter enter the soil and change the type of food available to bacteria. In turn, the altered bacterial community changes soil structure and the environment for plants.

Removing nitrous oxide from the atmosphere is a double-edged sword. The gas is naturally removed from the atmosphere mainly by chemical reactions in the stratosphere, but that also depletes stratospheric ozone, contributing to the ozone hole over polar regions. Although CO2 is removed by photosynthesis and chemical reactions in the ocean, Robertson explained, “The better strategy for reducing nitrous oxide is to avoid excess emissions altogether rather than try to remove what’s there.”

Multiple studies have revealed nitrogen applied in fertilizers and manures is not always used efficiently by crops. Typically only half of the nitrogen fertilizer applied is actually taken up by the crop during that growing season, according to a Michigan State University extension fact sheet. Improving efficiency can reduce emissions of N2O generated by soil microbes, largely from surplus nitrogen. 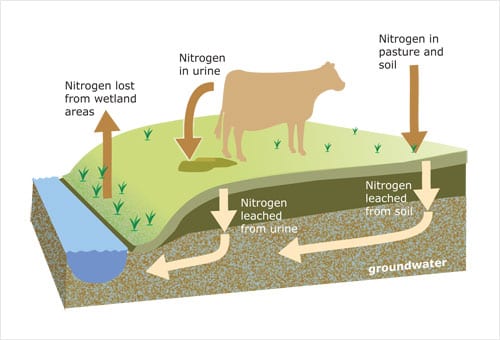 Reduce nitrous oxide emissions from your farm, while maintaining yields and crop quality, by using the Four Rs for better nitrogen fertilizer management:

“Conveniently, management that leads to avoided nitrous oxide emissions also leads to fewer losses of nitrate and other forms of reactive nitrogen,” Robertson said. Thus there are co-benefits to better managing nitrogen, including economic savings when less fertilizer is used more precisely. Likewise, cover crops provide co-benefits by building soil carbon and reducing erosion. No-till can do this as well.