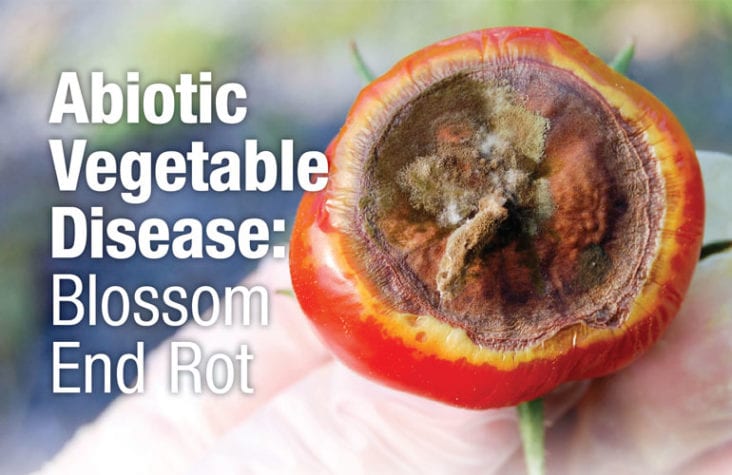 According to the University of Arkansas Extension: “More than 50 percent of all vegetable problems are related to an unfavorable environment. Vegetables that become stressed from environmental extremes are more vulnerable to the biotic diseases. Because of this fact, growers should focus their attention to providing all of the necessary environmental components to promote plant vigor, rather than relying exclusively on chemical disease management.

One of the commercially important abiotic plant disease is blossom end rot (BER). This disease is caused by a calcium deficiency, and is common in tomatoes, peppers, squash, watermelon and cantaloupes. Because calcium is transported by water into the plant’s xylem, in a system which is not overly efficient, to begin with, a lack of water can severely impact a plant’s calcium levels. This is also why foliar sprays of calcium don’t prevent or improve BER.

“Calcium is xylem transported from the roots and is not phloem transported from the leaves after a foliar application,” Thomas G. Ford, Commercial Horticulture Educator, Penn State University, said. “Therefore calcium applications to the foliage will not necessarily translocate to the fruit. BER is a localized calcium deficiency and is not plant- system- wide. Leaf tissues may show optimum levels of calcium while the fruit are displaying BER symptoms. All calcium sprays generally due itdo is add to production costs.”

But if calcium sprays that are sometimes used in an attempt to combat or prevent BER symptoms, aren’t the answer, what is?

A plant’s uptake of water, via the xylem, contains calcium from the soil. If there isn’t adequate moisture available to meet the plant’s demands for water, adequate calcium may not be transported, and a deficiency occurs. This issue is compounded when a plant’s fruit contains a waxy cuticle. This cuticle generally develops when fruit is at 1/2-inch to 3/4 -inch in diameter. BER is most common in plants with a waxy cuticle on the fruit.

Slowing of transpiration directly decreases the plant’s water uptake, limiting the amount of calcium entering the plant, and available to the fruit. If low calcium levels in the fruit occur, BER develops. But not all varieties and cultivars of susceptible plants are equally prone to developing BER.

“For example, determinate tomatoes tend to be more susceptible to BER than indeterminate varieties because there is an abundance of fruit maturing at one time,” Ford said.

But BER isn’t caused by a waxy cuticle alone.

“Each of the crops mentioned (tomatoes, peppers, squash, watermelon and cantaloupe) has a waxy cuticle that develops as fruit expands. But there are other factors that can contribute to or exacerbate the problem,” Ford said. “As a rule, these plants are more susceptible because they tend to set fruit during the summer, when moisture stress is very common. The reduction in calcium being transported from the soil to the plant translates into higher incidences of BER in these crops.”

Vegetable crops in general require about 1 inch of water per week in mid-summer, which translates to approximately 27,154 gallons per acre. Many growers just don’t recognize the vast quantity of irrigation water needed to supplement rainfall amounts, according to Ford.

“Ninety-nine percent of the growers I work with do not manage their irrigation system properly,” Ford said. “Most growers do not employ tensiometers or irrometers in the field to determine soil moisture levels. Many growers can not tell you how much water they applied or why they applied it.”

Even with adequate available water, BER can develop. Excess nutrient availability is another causative agent for the development of BER.

“Crops grown under high fertility regiments using ammoniacal nitrogen as their primary nitrogen source tend to have larger, more succulent leaves. The larger the leaf surface, the more transpiration you will see, and the higher the water loss will be,” Ford said. “Fruits that have a waxy cuticle are not going to lose as much water so less water moves into the fruit despite the rapid development and growth of the fruit fueled by the ammoniacal fertilizer.”

Excessive sodium or other nutrients in soils, or in irrigation water, can also limit available calcium, competing with the needed calcium for uptake into the roots. Plant analysis or tissue testing can help growers determine if needed nutrients are available to the plant in sufficient levels.

“Many growers do not regularly use plant analysis to guide them when making fertility management decisions. Growers that base application rates and nutrient sources on visual symptoms alone are usually wrong, and in some cases can make a cropping situation go from bad to worse,” Ford cautioned.

Determining the root cause of BER can take some investigating. With a variety of factors influencing the amount of calcium available to the developing fruit, finding a solution requires a multifaceted approach.