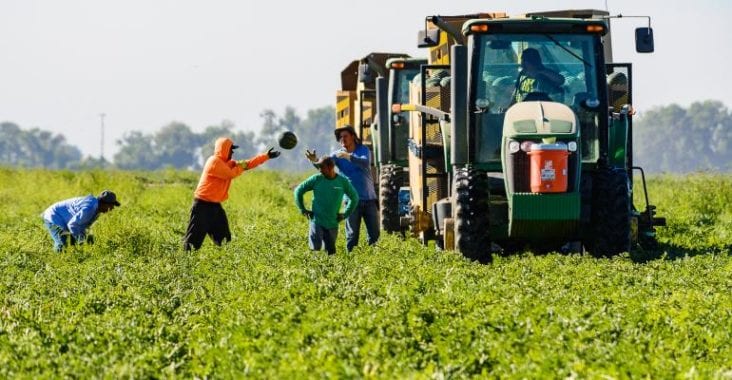 Planting, caring for and harvesting the grain crops is relatively simple work. Simple, in the fact that it can be mechanically seeded and harvested.

Fresh market crops are significantly more challenging. These in-demand crops are hand-tended and hand-harvested. At the height of the harvest season, Desert Premium Farms needs as many as 100 to 200 laborers in the fields at any given time to weed and or pick the vegetables and fruits when Mother Nature determines it’s time. “The labor supply is critical to the fruit and vegetable crops and it is dramatically limited,” Boelts said.

Boelts, like other commercial producers, is faced with significant labor shortages.

“Average employment (the number of full-time equivalent jobs) has been rising over the past two decades, by about 90,000 in the United States between 2005 and 2015 to almost 1.3 million,” said Philip Martin, Ph.D., University of California-Davis Department of Ag and Resource Economics. “(The average has increased) by 40,000 in California between 2005 and 2015, where average farmworker employment was 420,000 in 2015 (NAICS 11), a third of U.S. farm employment.”

Kristi Boswell, the director of congressional relations for the American Farm Bureau, estimates that more than 50 percent of workers filling those positions are undocumented. The largest population of immigrant labor comes from Mexico, with workers also coming from Jamaica, Haiti and South Africa. Laborers from Peru are increasing, though they largely come for work in the ranching industry.

“It is difficult to get good data because undocumented workers are largely filling these positions. For obvious reasons, this population isn’t interested in completing surveys,” she said. “Farmers do their best to verify I-9 and employment documents without being discriminatory. But many of the documents are fraudulent.”

The H-2A program has been Congress’ solution to providing growers with legal, documented immigrant labor. “Since most H-2A workers are employed in crops for 10 months, H-2A workers are filling more than 10 percent of the long-season jobs on U.S. crop farms,” Martin said.

However, the program falls short of providing enough labor on time to pick the crops when they are ripe. Growers cite the cost of using the program and delays in allowing workers in as significant challenges.

“When workers arrive 15 to 30 days late, that’s devastating to a crop,” Boswell said.

The H-2A program authorizes a fraction of the workers needed each year. Thomas Hertz, an economist for the U.S. Department of Agriculture, points to data published by the Department of Labor, Office of Foreign Labor Certifications & Department of State that reports that in fiscal year 2015, 140,000 positions were certified as H-2A eligible and 108,000 visas for those positions were granted.

Specific statistics are problematic to obtain because public data sources count H-2A workers in different ways. Hertz said, “That one count is the number of positions certified by the Department of Labor, but that not all of these positions require a full-time worker and not all get filled, so the actual number of people entering the country on H-2A visas (according to the State Department visas) is lower.”

Despite double-digit increases in certified positions and approved visas, growers are facing labor shortfalls. Traditionally, workers filling these positions are immigrant workers coming to the U.S. in other ways, legally and illegally.

Before the borders were secure, workers could make their way into the country, find work on farms, and return to Mexico during the off-season.

“Today, it can cost an individual thousands of dollars to pay a smuggler to get them into the U.S.,” said Edward Alden, Bernard L. Schwartz Senior Fellow for the Council on Foreign Relations.

Tighter border security is only a piece of the puzzle. “An improved economy and lower birth rates in Mexico have further reduced the numbers,” Boswell said.

And, the immigrant workforce that is available is aging. “Many of the workers coming in from Mexico are 50 to 60 years old and are aging out of laborious jobs,” Boelts said.

Without legislative reform, growers and consumers have one of two options.

“We can import food or we can import labor,” Boswell said. “What we need is responsible immigration reform and that will require a legislative fix.”

How did we get here?

Immigration and farm labor has never been a simple process, but in the late 1940s through early 1960s, it was simpler. In July 1951, Congress signed PL-78. This authorized the renewal of the Bracero (manual laborer) program that began when the Mexican Farm Labor Agreement was signed Aug. 9, 1942.

“More than 400,000 workers a year were let in under this legislation,” Alden said.

“In the early 1950s, the Mexican government wanted the U.S. government to sanction U.S. employers who hired unauthorized workers,” Martin said. “(The goal was that it would) deter Mexicans from leaving illegally for U.S. jobs.”

In response, Congress made the “harboring” of unauthorized workers a felony in 1952. “The so-called Texas proviso exempted employment from the definition of harboring,” Martin said.

By the late 1950s, the Department of Labor (DOL) appointed consultants to review its administration of the Bracero program, Martin said. The consultants’ report, released in 1959, noted that DOL succeeded in allowing farmers to hire Braceros, but not in protecting U.S. workers from adverse effects of Braceros.

“The report emphasized that defining adverse effects is difficult because the lack of U.S. workers that led to Braceros would be expected to increase wages and bring about labor-saving changes,” Martin said. “Instead, the availability of Braceros in the fields held down wages and prompted growers to shift work from higher-wage packinghouses to lower-wage fields where Braceros could be employed.”

The report emphasized that many Braceros were employed in commodities that were in surplus. About half worked in cotton during the 1950s, where piece-rate wages did not increase. In Bracero-dominated fruits and vegetables in California, normal market forces did not push up wages from year-to-year. The report emphasized that Mexican Braceros had more benefits and guarantees than U.S. workers, including transportation paid from Mexico to their place of work, a guarantee of work for three-fourths of the contract period, employer-paid housing and wage guarantees.

The 1959 report recommended that the Bracero program be continued, but that DOL require U.S. farmers to try to recruit U.S. workers and to set minimum wages for U.S. and Bracero workers that protect U.S. workers from the adverse effects of foreign workers.

Instead, by 1965, the program had been eliminated. “That very well may have been the beginning of illegal immigration,” Alden said. “With the elimination of the program, workers had no legal way of entering the country.”

In 1986, the Immigration Reform and Control Act split the temporary “H2” worker category previously formed in 1952 into two categories, the H-2A for agriculture and H-2B for other businesses. From then until the early 1990s the borders were weak, and workers continued to flow into the United States. But, in the last few years, with increasing border security and an aging workforce, that is all changing.

Since then, multiple proposals, including the Ag Jobs Reform Act, have been put forward and defeated.

What does the future hold?

With the arrival of the Trump White House, the direction of immigration reform will shape future discussions in Congress. Despite the campaign promises of a hardline stance, the new administration has signaled a more nuanced approach, especially in the ag industry.

“Right now the main concern is that the farm workforce is aging, as new immigration from Mexico has fallen off considerably in recent years,” Hertz said. “That is raising fears of labor shortages, and it is the reason that farmers are expanding use of the H-2A program, despite the costs associated with going this route.”

Under the current guidelines, H-2A workers must be seasonal workers, not year-round workers. Before receiving approval for H-2A employees, the farmer must attempt to recruit domestic workers first. The grower must pay a specified minimum agricultural wage, provide housing and pay for transportation, both to and from work and to or from the country of origin.

“This means that the program is used far more by crop farmers than by dairy farmers or cattle ranchers who need year-round workers. A rough estimate is that about 10 to 12 percent of H-2A workers are engaged in animal agriculture (including sheep, goats, fish farming, etc.); the rest are in crops.

Regardless of what Trump decides to do, it will take time for change. “The current system poses a built-in dilemma,” said Alden.

Current public policies are designed to protect jobs for native workers and provide preference to native workers over foreign workers. But, how is it possible to know that native workers will perform the jobs traditionally filled by immigrant workers? “There is no way, for example, (that) a strawberry grower can afford to pay a native worker $25 per hour to pick berries and remain competitive in the market,” he added.

Many growers will also tell you that native workers aren’t even interested in learning more about open positions. Producers using the H-2A visa program must demonstrate efforts to hire local employees. Yet, despite posting help wanted ads and making efforts to recruit local labor, the attempts are unanswered.

“This is a complicated issue and we need to find the middle, but it will be an uphill battle,” Boswell said.