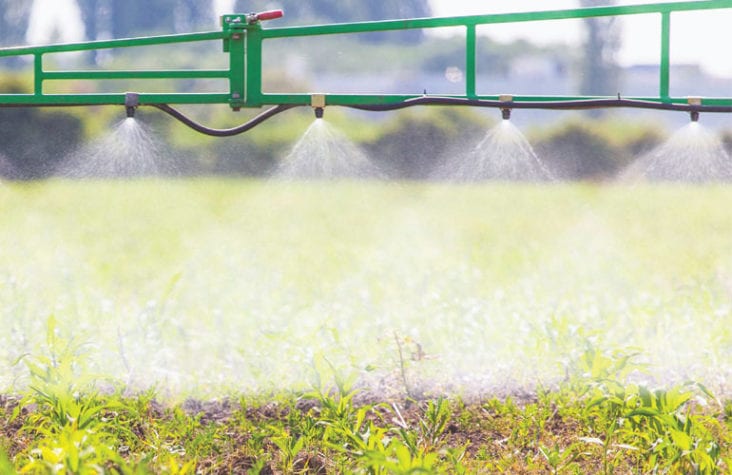 Fungicides differ from other pesticides. Most insecticides and some herbicides ‘knock down’ pests, but fungicides work best when applied before pests appear. Almost all fungicides are developed to protect healthy plants from a pest pathogen before infections occur. Most fungicides are classified as protectants. Strength of Your Fungicides

Fungicides are applied when nearby monitoring systems predict an approaching disease or when weather conditions that favor a particular disease make it likely for its pathogen to invade a crop. Therefore, protectants are often used as a routine precaution. These primarily preventive contact fungicides remain on plant surfaces and provide a barrier between the plant and the fungus. They combat disease by targeting the pathogen’s spores and inhibiting its germination.

Protectant fungicides must be applied prior to infection by the fungus and re-applied to maintain the same level of activity, particularly with new plant growth and increased likelihood of disease.

According to the Center for Integrated Pest Management’s pesticide stewardship site, Mode of action (MOA) describes the processes by which the fungicide poisons the fungus. The target site is the exact location of inhibition.

A single-site MOA, active against specific targets in the pathogen, has targeted toxicity, which limits negative impact on the plant. However, single-site MOA fungicides pose the greatest risk of the pathogen developing resistance.

Multi-site MOA fungicides are active against multiple targets and may even affect several different classes of fungi. Since they interfere with numerous metabolic processes of the fungus in question, multi-site fungicides offer lower risk of resistance.

Selection is the process by which control measures favor resistant individuals over susceptible ones. Selection process refers to the intensity of the selection.

Pesticide resistance is defined as the change in the sensitivity of a pest population to a pesticide. Resistance is a serious and growing problem.

An international group, the Fungicide Resistance Action Committee (FRAC), provides guidelines and recommendations to manage the development of fungicide resistance. The FRAC committee assigns risk levels for each class of commercial fungicides based on both the mode of action and incidence of resistance in the field.

High-risk products have a single-site MOA or are fungicides in which disease-resistant populations have been reported. Medium-risk fungicides are those where resistance is seen with the mutation of more than one target site or where resistance formation is less frequent. Low risk products have had rare occurrences of resistance after many years of use. The FRAC website, http://frac.info, identifies the modes of action, common names and FRAC codes.

For example, fungi that produce a vast number of asexual spores or undergo multiple disease cycles during a season often have a much greater chance for fungicide resistance development. This includes the pathogen that causes powdery mildew or fungi that have a high probability for sexual reproduction in field populations, like the late blight fungus. Among others, pathologist Dr. Margaret McGrath at Cornell’s Long Island Horticultural Research and Extension Center has observed those situations.

Wyenandt and Maxwell further noted, “Importantly, in instances where only a few high-risk fungicides are available for disease control, selection pressure on the pathogen may be intensified by the repeated application of the same or similar fungicide chemistries.”

1. Use fungicides correctly. Avoid at-risk fungicides; but many offer highly effective, broad-spectrum disease control. However, by reducing the number of single-site fungicide applications, the likelihood of resistance development is reduced. To minimize this impact, apply them in combinations as a tank mix with other low-risk multi-site fungicides. The different fungicides in the mix must be active against the target fungi so that subgroups resistant to one MOA are controlled by the fungicide with a different MOA. The products must also be compatible to be mixed.

3. Use disease predictive models and scout fields to effectively time applications of fungicides. Use multi-site fungicides in later parts of the growing season when disease pressure is often greater. Apply labeled rates with adequate coverage to produce good control. Use a soil or seed fungicide treatment that only requires one or two applications per season, thus keeping the risk of resistance low.

4. Manage the fields wisely by selecting resistant varieties. Use cultural practices to reduce the pathogen population, and create conditions less favorable for the pathogen to develop. Maintain soil moisture and crop nutrition and manage other pests to avoid crop stress. Avoid inadequate or excessive fertilization with nitrogen. Also avoid excessive irrigation or frequent irrigation with small amounts of water. Both increase pathogen spread by extending periods of leaf wetness and high soil moisture.

5. Rotate crops to allow greater flexibility in choosing different tillage practices and use fungicides with different MOAs. Be aware that resistant plant pathogens can spread from nearby fields or other areas. Participate in extension programs that conduct area-wide monitoring for the presence of disease pathogens and the potential resistance development.

In a blog posted on Feb. 2, 2015, Jim Jones, an assistant administrator in the Environmental Protection Agency, said that biopesticide usage has more than quadrupled lately. Jones points out that many farmers use biopesticides in their integrated pest management programs so they can rely less on higher-risk pesticides.

Biofungicides are beneficial microorganisms such as the naturally occurring specialized fungi and bacteria that attack plant pathogens. Biofungicides are increasingly being used as part of an integrated disease management program to reduce the risk of pathogens developing resistance to the traditional chemical-based fungicides.

Biofungicides function in several ways. To suppress pathogens that infect roots, the biopesticide shields the plant root by growing a defensive barrier around it, which prevents the fungi from attacking the root. Another mechanism is the production of a chemical compound such as an antibiotic that kills the target organism. Parasitism of the target which feeds on the pathogen is also effective. A fourth mechanism involves induced resistance to the host plant. In this, the biofungicide triggers the plant to turn on its own defense mechanisms.

Advantages of biopesticides include reduction in chemical fungicide usage and shorter re-entry intervals. They are less phytotoxic. Also, most can be rotated with chemical products.

The disadvantages focus around the shorter shelf life and that biofungicides do not eradicate the disease.

Biofungicides, like protectants, must be used before the onset of disease development. Most work best when used with a combination of disease strategies.

The use of all pesticides, including biofungicides and conventional fungicides, must be according to the label on the product.

Editor’s note: This post was originally published in the 2015 Growing Ag Industry Guide.