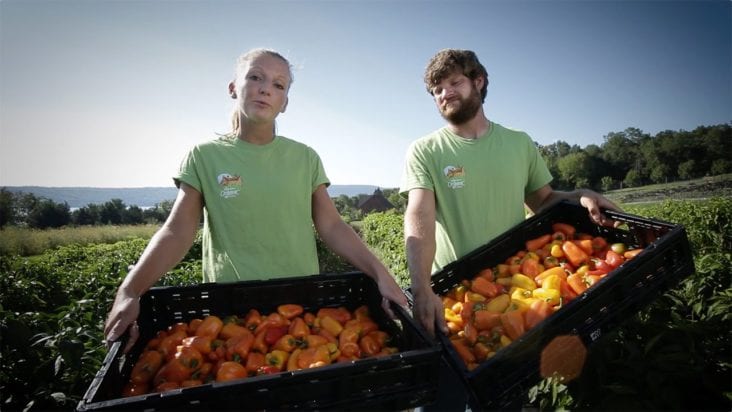 Wegmans, a family-owned regional supermarket chain with 92 stores in the mid-Atlantic and New England, contracts with over 800 growers in the five states where their stores are located to sell their customers locally grown produce. The one thing that they couldn’t find in the Northeast was abundant and affordable organic produce. – Wegmans Organic Farm

Ten years ago, there wasn’t much locally grown organic produce available. Wegmans took its customers’ desire to eat local and organic seriously enough to designate a special committee to study ways to increase the amount of organic produce grown in the Northeast. Danny Wegman and his wife Stency bought 50 acres of farmland in Canandaigua, New York, and started growing their own organic fruits and vegetables. The land, now the Wegmans Organic Farm, gave Wegmans credibility from growers who were on the fence about turning their conventional operations to organic.

Scarcity of organic produce in the Northeast

Wegmans Organic Farm is a learning base for farmers who take on the risk of trial crops and share what they learn with their growing partners. According to a 2014 report from the Organic Trade Association (OTA), a North American organic agriculture and products organization, “Supply shortages are one of the greatest challenges facing the industry today. Despite continued growth in production, handlers are not able to keep up with demand.” The research farm was born out of a desire to help the region.

Eben Kennedy, Wegmans farm manager, describes the research operation as more of a field laboratory than a full-blown farm with acres of produce. A 7,200-square-foot barn that the Wegmans built nine years ago at the start of the project is the center of operations. The barn includes a seed room where Kennedy and his farm crew preserves seeds from hardy varieties that have thrived in the Northeastern region.

In addition to the seed room, there’s a greenhouse where seedlings are started before being moved to raised beds. The goal is to determine which seed varieties produce the tastiest product and are economically sustainable for Northeastern farmers. The research team carefully tracks labor costs and initial cash outlay so that their growers can make an informed decision about investing in a new crop based on investment and return. The goal is to avoid convincing a farmer to tie up acres of his land with an experimental crop that fails. Instead, the Research Farm chooses various vegetables to grow and if they thrive, they pass on their research and outcomes to the grower. If a crop fails or has problems, Wegmans’ researchers learn from the experience and absorb any cost associated with the trial. 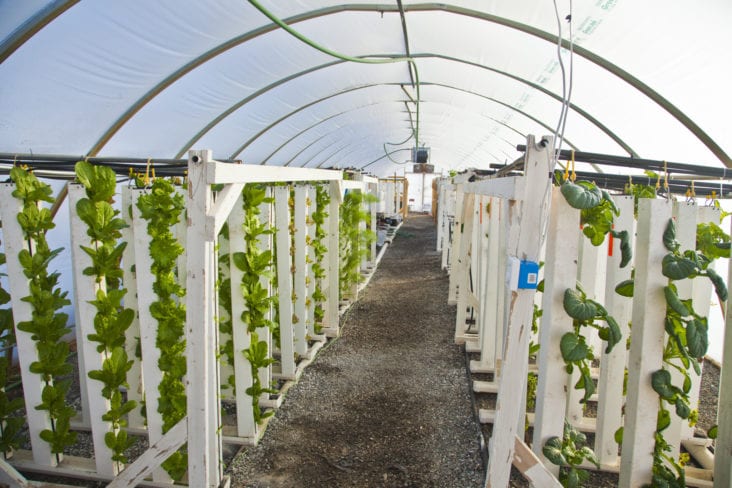 Trail plots at the Research Farm and high tunnels at work in the winter months.

When determining profitability, Kennedy crunches the numbers. He first takes the dollar value for transportation moving produce from California to New York – which he estimated at $8,000 two years ago. He needs to meet or undercut that number to offset growing the same product closer to home. “The goal is not to compete with the West Coast but to bring more growing into our own region,” Kennedy said.

One valuable resource for the research farm has been the Cornell Cooperative Extension in Ithaca, New York. Danny Wegmans’ relationship with the Cooperative Extension dates back to the ’90s when he received the 1997 “Friend of Cornell Cooperative Extension Award” for “providing a market for locally grown produce and encouraging farmers to use Cornell’s Integrated Pest Management practices, educating consumers about the value of fruits and vegetables in their diet, promoting cultural understanding through varied ethnic food, investing in youth by providing opportunities for the workforce of the future and promoting healthy lifestyles.”

Currently Cornell Extension and the Wegmans Organic Farm are working on 10 separate agricultural trails, which include developing an organic pumpkin best suited for use in purees and testing organic wheat varieties for nutritional gains. No matter what the vegetable or fruit on trial, Kennedy said that the goal is determine if it is sustainable and profitable to grow it in the Northeast region.

One of their other projects with the Cooperative Extension got started in 2014 when Danny and Stency bought Heron Hills Winery not far from the organic farm. There were mature grapevines on the property but it was the mature apple orchard that was eyed for their ongoing organic research. Susan Brown, Ph.D., director of the New York State Agricultural Experiment Station, has worked with the Wegmans Organic Orchard conducting trials on several new varieties of apples available only in New York State.

Brown also noted that the trials conducted at both farms go well beyond simply planting and growing new varieties of plants.

“It is impressive to see a company like this that takes produce development so seriously,” Brown explained. “Danny believes in healthy food for healthy lives and he is totally committed to bringing together groups of research scientists to explore new ways of developing, processing, packaging and selling those foods.”

Wegmans works with weed scientists, soil specialists, entomologists, nutritional experts, food safety scientists and a long list of other experts in produce development. One of those experts is Eliot Coleman, a leading organic-agriculture authority and expert in year-round organic growing. Coleman helped the research farm in their experiments with hoop houses (high tunnels) and portable greenhouses that allow them to extend the growing season by planting earlier and harvesting later. Wegmans’ farming partners and customers have benefited from the work with Coleman. The lessons that Wegmans learned from Coleman’s season-extending techniques means a larger harvest and more revenue for the grower and more organic produce throughout the year.

Another benefit to having their own research farm is that Wegmans understands how much work and time that a grower invested so they know a fair price for the product. The Wegmans’ buyers are better able to communicate with growers. Producers willing to develop a face-to-face relationship with a retail buyer negotiate prices fair to both producer and grocer, and deliver produce of consistent quality and quantity can develop profitable wholesale.

Ryan and Sarah Voiland have owned and operated Red Fire Farm in Granby, Massachusetts, for 16 years. When they started farming in 2001, they were already fully committed to farming organically. However, they were skeptical about getting into the large-scale wholesale market. When a produce manager from Wegmans found them two years ago and expressed interest in a partnership, they decided to take the risk and are happy now that they did.

“Wegmans experience growing on their own farm helped them understand what we faced and made them more flexible,” Voiland said. Wegmans also communicates with their farming partners. A liaison from Wegmans visits their farm a few times a year to talk about what they are growing, packaging methods and plans for the season ahead.

This farmers market display helps promote their farm and sends a clear message that their farm matters. Wegmans makes up half of Red Fire Farm’s wholesale business and Voiland trusts that Wegmans will meet their end of the bargain each year and that his farm will not be vulnerable to chain-store price war.

Visitors to the farm are frequent and include a wide range of people from scientists to curious customers. Wegmans employees are also always welcome. Kennedy noted that they often will come to the farm for a few weeks to work and learn about the organic process so that they can better serve customers who want to know about the food they are buying.

Voiland said that he also appreciates the way that Wegmans presents and promotes his produce in the stores. “We sell Wegmans 30 to 40 varieties of produce over the course of the year,” he explained. “Because of these numbers, they display our produce all in one place with the name of our farm next to our vegetables.”