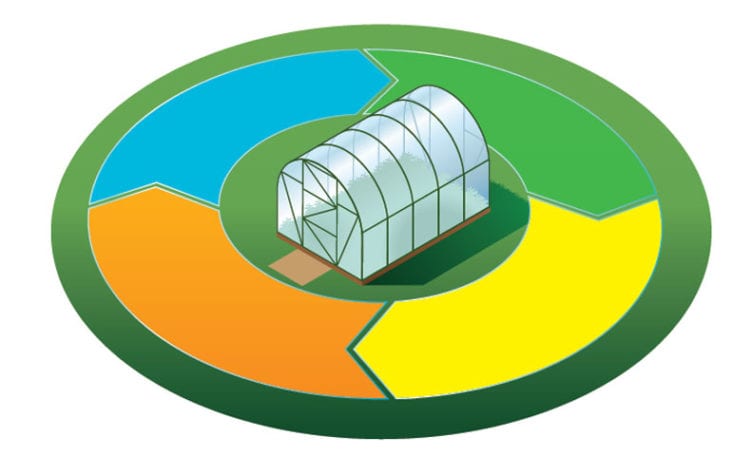 Selection of a medium is among the earliest and most critical decisions to be made in the setup of any controlled environment agriculture system. This choice will influence and be affected by watering schedules, fertilization programs and growth rates, and, ultimately, has the potential to determine the relative success or failure of the crop. The ability to create and manipulate an optimal root zone environment is as important as the ability to maximize the plants’ overall atmospheric ecosystem.

How to choose a medium

The general advice to maintain a moist and well-drained root environment is always applicable. Basically, don’t let the plant’s medium completely dry out, which can scorch the roots, and don’t allow saturation for an extended period of time, which can suffocate the roots by depriving them of oxygen. Just like traditional farming, one must understand that different crops prefer different rooting environments to achieve optimal growth rates and to maximize produce quality.

Regarding controlled environment agriculture, all possible mediums, including potting soil, are considered. Conversely, in the subset of hydroponics, soil is omitted, and the remaining types of mediums are referred to as substrates. Substrates generally have a higher pore space per volume, making them comparatively lighter by volume, thus allowing for a higher percentage of oxygen in the mixture. As a result, produce grown in a substrate will go through a wet-dry cycle much more quickly than traditional soil. This is a contributing factor to the higher growth rate and improved yields associated with hydroponic development. 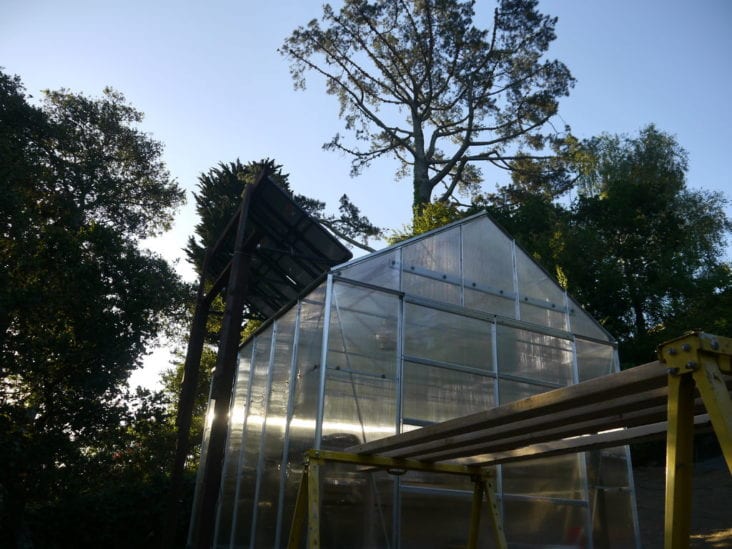 Hydroponically speaking, the primary purpose of a substrate is not to provide nutrients to the plant. However, the substrate holds the key to retaining and releasing the oxygen and nutrient solution the plant’s roots need.

Before proceeding, it is necessary to understand the concepts of water retention and water-holding capacity. The capacity of a substrate is the difference between the mass (weight) of the substrate when completely saturated and the mass when totally dry. Water retention refers to how much water the substrate holds onto, which will indicate how quickly the substrate will dry out.

Another relevant factor in choosing a medium is if the produce will be grown in an organic or a synthetic medium. Organic substrates generally have higher input costs, and allow more complex interactions within the root zone. Organic compounds facilitate an environment suitable for colonization of beneficial bacteria and fungi, thus creating a living substrate. They generally contain buffers, increasing room for error, but increasing the time necessary to notice results from changes in the nutrient formula. When using an organic medium, it is not recommended to use synthetic fertilizers because the salts they contain can hurt the microorganisms.

Synthetic substrates generally have lower input costs and contain fewer buffers, so the effects of changes in the nutrient solution can be noticed almost immediately. However, the lack of buffers decreases room for error.

An organic crop can still be propagated using a non-organic medium. However, it is harder to introduce slower releasing organic fertilizers into the root environment, and colonization of the substrate with microorganisms is more difficult.

Coco-coir contains shredded, ground up coconut husks, which are a byproduct of the production of many products like coconut oil, coconut water or coconut milk. It is also available as a compressed block or slab. It is available in buffered or non-buffered form. In its non-buffered form, the PH can range from 4.5 to 7, and may contain high levels of salts depending on the region from which it was harvested.

Acquiring a buffered form that is freshwater washed or steamed, as well as PH stabilized is recommended. It is good transition substrate for those with outside experience because of its soil-like characteristics and can be used throughout the entire growth cycle. Coco is completely organic, so it provides an ideal environment for beneficial microorganisms to colonize. It is environmentally friendly and a sustainable resource. It also effectively retains moisture and provides plants with an optimal air/moisture ratio. Coco can be used for several crop cycles if thoroughly washed after a cycle, may provide protection against some root diseases and is a good anchor. Disadvantages of coco are that it may hold too much water if compacted and has a relatively high initial cost.

Stonewool and rockwool are made from minerals, including basalt and limestone, which are melted, spun into filaments and bound to form mats, cubes or plugs. It is a sterile and inorganic product, so it provides less of a buffer. It has historically been a popular choice for greenhouse growers because it is the cheapest option, but not necessarily the best.

Advantages are that it works well with multiple setups and fertilizer types, doesn’t compact, can be reused for a few cycles and is a great choice for manual cloning or seed starting. It is scalable, as plugs can be moved to larger blocks or transplanted to another medium later in the process. Disadvantages are that it is not as adequate for providing support for tall or large plants, has less oxygen capacity compared with coco, holds less water than coco and may have an issue of water settling.

If the top of the cube dries out, salts will remain. If the lower portion of cube remains wet, saturation may become a problem. The solution is to flush with a low dose nutrient solution and to allow runoff, which wastes water and fertilizer, making it environmentally unfriendly. Green algae and other unwanted mold can grow on the cubes unless they are covered. It can be dusty, and the fibers it contains could be a respiratory irritant.

Peat moss is an organic substrate that develops in a bog and consists of decomposing vegetation layers that are harvested. It is rich in microorganisms and beneficial bacteria. Other advantages are that it retains water well, provides a good anchor for the roots and is a good seed starter. However, its sustainability environmentally is debatable. Disadvantages are that it can actually repel water if it becomes dried out, can absorb nutrients that were intended for the plants and has an acidic PH around 4.5, so it needs to be treated before introduction to a system. It can compact and decay, so the substrate’s life expectancy is lower than other options. Peat moss can be dusty, and the fibers can be a respiratory irritant.

Baking clay pellets or pebbles in a kiln increases their size and causes them to become more porous. It’s an inorganic and sterile medium, so it isn’t much of a buffer. The pellets have low water retention, making it ideal for recirculating systems or as an additive to improve drainage in organic systems. Clay pellets have a stable PH and do a good job of retaining moisture without being saturated, allowing the plant to have oxygen readily available. Additionally, produce grown in this substrate may not require a traditional wet/dry cycle, so irrigation systems may be allowed to operate continuously. The medium’s high degree of porosity provides nooks and crannies for roots to permeate, thus creating an anchor for the plant. It is lightweight, can be used throughout the entire growth cycle, be reused for many cycles and will not compact or break down. Disadvantages include high initial costs, and that microscopic roots may clog pores in the clay, which will require cleaning before being used again.

Some consider this to be hydroponics in its purest form, as the root of the word literally means “movement of water.” Plants are placed in a collar for stability. The roots hang down into the nutrient solution in a deep water culture system, or are suspended in a misting environment in an aeroponic system.

Water can be organic or inorganic, depending on the additives used. However, it offers no buffers. Mineral salts from fertilizers will be dissolved into usable elements made immediately available to the plant, which offers the grower precision timing of what and when supplements are delivered. One must consider the PH, hardness and salinity of the water to be used, as well as account for presence of calcium, lime and iron in the H2O. Irrigation may be continuous, provided the water is highly oxygenated. Dissolved oxygen content decreases as the nutrient solution warms, but plant demand for the oxygenated nutrient solution increases as temperature rises, so it is easy to see how this can become a cyclical problem. However, the temperature of a nutrient solution can be controlled, either by introducing a water chiller into the solution or keeping the nutrient tanks underground where they are less susceptible to temperature changes. Additionally, supplemental air stones can help increase oxygen levels in the water. Use of water as a medium is an excellent choice for all plants, providing they are not top heavy. This is an advanced technique, but the upside potential can far outweigh risks and complexities associated with it.

Perlite is volcanic rock that is heated until it turns into very light glass stones. It is inert, inorganic and has neutral PH. It feels like Styrofoam in its density and weight and has good water retention. It’s usually used as an additive to increase drainage and aeration or to prevent compaction.

Vermiculite is similar to perlite in its origin and properties, although it holds more water and less air. It’s usually used as an additive to help to keep substrate moist and to prevent compaction. However, it can degrade quickly.

Sawdust is a possible organic additive with a neutral PH and a high air to moisture content ratio. It has little water retention, and nutrients intended for the plant may become trapped in the sawdust, so this must be accounted for. Sawdust needs to be thoroughly composted and treated to ensure no pests are present but offers a good environment for beneficial organisms to colonize.

Sand is inorganic, has low water retention and small pore capacity. It can be used to increase drainage of a heavy or dense substrate and can add weight to tall and heavy plants, acting as an anchor.

Many products on the market blend mediums together and contain various additives. Additionally, many growers create their own blend or use a combination of mediums throughout the growth cycle. For example, you may prefer organic coco combined with perlite to increase drainage and prevent compaction or prefer to start plants in an aeroponic environment and transfer them into baskets with clay pellets in a nutrient film technique system once they are established.

So, what is the best substrate? The answer is highly subjective and depends on many factors. The answer varies by crop, system used, scale of operation, cost, development stage of the plants and the grower’s goals. It’s similar to asking what is the best crop? Is it the most nutritional, the best tasting, the one easiest to grow or the most profitable?

Small-batch testing is recommended to determine which substrate, additive or combination would work best for your individual set of circumstances.