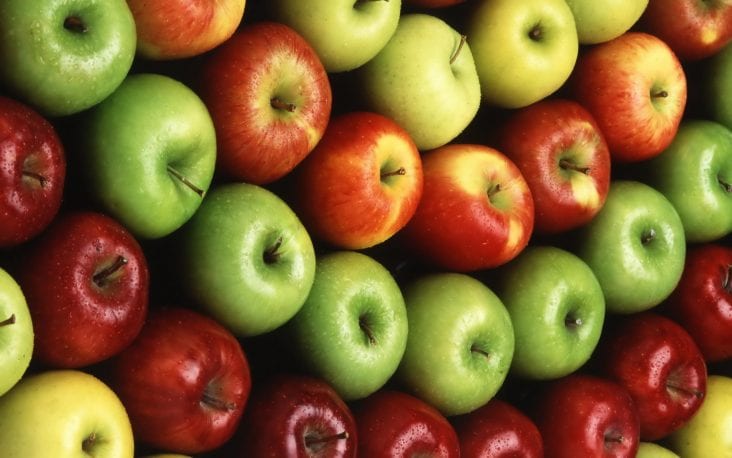 Since then, he said growers have controlled codling moth damage better through mating disruption, new insecticides, and improved management practices; however, Walgenbach indicated that the codling moth and oriental fruit moth continue to cause significant problems for growers.

The codling moth larva stretches to about three-fourths of an inch long and has a pinkish-beige body, Walgenbach noted. The adult is about 1 inch long with gray-striped wings and patches of copper brown at the tips.

Walgenbach indicated that the codling larva tunnels into fruit directly and leaves brown excrement in the holes it makes. This pest tunnels its way to the apple core and feeds on the seeds. A codling moth also may leave sting marks on the fruit’s surface.

Stephen Schoof, an agricultural research specialist in the entomology department at the Mountain Horticultural Crops Research and Extension Center in Mills River, North Carolina, said that the first generation of codling moth hatches eggs at about 350 degree-days after biofix and finish hatching eggs by 1,050 degree-days. Degree-day models simply predict adult emergence and egg hatches and mean that growers should pay extra close attention at that time. He stressed that growers must stay on top of hatching between 350 to about 750 degree-days.

By the third generation of codling moths, he said that adults start emerging at about 2,500 degree-days after biofix.

Schoof noted that the intensity of pest populations can be assessed by using pheromone traps, which provide information on the need for and frequency of insecticide applications.

For example, in Henderson County, an average of 6.3 codling moths was trapped by August 24, 2015. By August 31, an average of 13.7 was trapped. That number dropped to an average of 9.0 codling moths by September 8. Rather than total populations, Schoof said this instead shows the timing of insect emergence and fluctuations of codling moths. For instance, some county growers may see larger or smaller populations in their orchards during those times. Schoof said rarely do apple growers, whose orchard has been free of damage, see insect problems suddenly developing in September.

Walgenbach indicated that the oriental fruit moth larva overwinters in tree bark, dead leaves, and other debris. The larva feeds on shoot tips and inside fruit, leaving holes with brown excrement. It leaves random holes inside the fruit but seldom enters the core. It also can leave stings on the fruit and attack new leaf shoots. This may cause the stunting of the tree’s growth and distort the leaves. By early spring, it develops into pupae and comes out as an adult in mid-March to early April.

The first generation of the oriental fruit moth occurs between 400 and 500 degree-days, Schoof said, and he suggested only one insecticide application is needed then because the first generation egg laying is usually low in apples at that time.

Any effective first-generation control of oriental fruit moth may cancel out any need for a second-generation control, Schoof pointed out; however, if apple growers see trap insect emergence high at that time, he suggested the use of more insecticides, especially if the numbers are between 1,100 and 1,400 degree-days.

During the third generation, growers may need to spray if emergence numbers reach 2,200 degree-days after biofix.

Schoof said that four generations are hard to predict for oriental fruit moths because overlapping generations late in the season can be difficult to gauge. Yet, he predicted that continuous egg laying can happen between August and October. He advised that growers utilize pheromone traps to determine whether they need to spray insecticides.

This year, trap emergence or fluctuations for oriental fruit moths rose at the end of August from 2.4 on August 24 to 9.3 on August 31. By September 8, they had decreased to 5.0.

Walgenbach indicated that the plum curculio larva is about 1 inch long and legless. It appears white with a brown head. The adult is about ¼-inch long. This pest has a curved snout, and its body is warty, brown to gray and sports white patches. Growers will see two bumps on each wing. When in a posture mode, this insect is hard to identify.

Plum curculio adults overwinter in leaf litter and on the outskirts of apple orchards, Walgenbach noted. These adults emerge when temperatures go beyond 70 degrees Fahrenheit. They mate and lay eggs under the fruit’s skin. Eggs hatch within a few days and feed in the fruit.

Using its snout, this pest cuts a crescent-shaped slit beneath each egg, Walgenbach said. This is to stop the apple from crushing the egg. Unfortunately for growers, the slit becomes a cosmetic scar as the apple grows. He points out that the larva can bore tunnels in the fruit, causing the fruit to become knotty, and the apples may fall to the ground.

Walgenbach indicated that infestation of plum curculios occurs often when temperatures go beyond 70 degrees. After blooms show, he advises growers to check their fruit twice a week for damage such as feeding and scars.