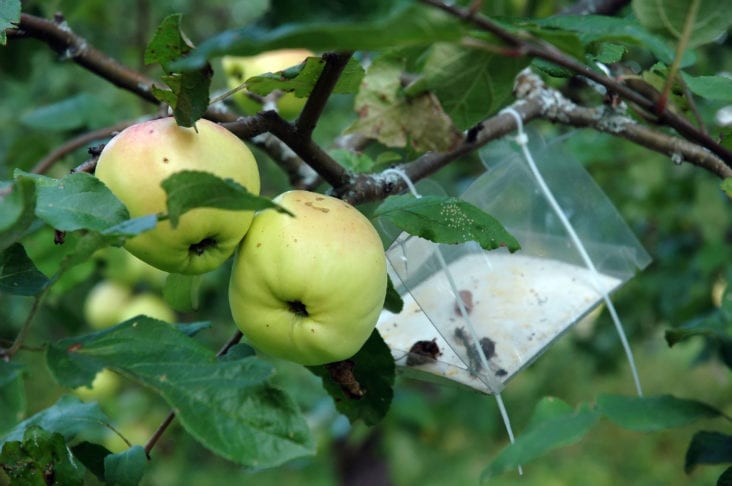 Most people wouldn’t argue apples taste good. They can be sweet or tart, red or green, large or small. According to health experts, they are good for us, too. Color and taste preferences aside, when a consumer goes to the grocery store, they expect to find decent-looking apples, too — free of wormholes and insect bites. Insects in Apple Orchards

To achieve a fruit free of wormholes and insect bites, growers do their best to control pests. Four pests of concern in apple orchards are the rosy apple aphid, the green fruitworm, the apple maggot and leafroller. Let’s look closely at these pests.

According to Chris Bergh, a professor of entomology with Virginia Tech, the rosy apple aphid moves among trees and broadleaf weeds onto the orchard. The large number of aphids can form colonies, and he said as the apple leaves grow, they envelop the colony, making it hard to apply insecticides effectively.

“The feeding causes foliage to curl or crinkle,” Bergh said. “The flat leaf blade would be curled.”

Early in the growing year, feeding can injure the fruit, leaves and stems, according to the Integrated Pest Management (IPM) Center at North Carolina State University (NCSU). Damaged fruit may produce small fruit that appears hard and knotty. The injury of most concern occurs during cool springs. That is when aphids increase in numbers.

The rosy apple aphid may stunt the apples, causing them to become pigmy fruit, which hangs longer on the tree. The prolonged period can cause fruit rot and act as a source for disease and inoculation.

Bergh recommends controlling the rosy apple aphid during the prebloom stage. To control this pest, he recommends using the following, according to their ratings in the 2016 Spray Bulletin for Commercial Tree Fruit Growers:

According to NCSU, rosy apple aphid control is better achieved during the pink or petal fall stage. However, insecticides with long residual control are good, too, when applied at the green tip. Because of toxicity problems to honey bees, neonicotinoids such as Assail, Belay and Calypso are recommended after bloom.

According to Bergh, the green fruitworm arrives in the orchard early in the season. Flowers have yet to open up and are in a tight cluster. The flower expands and opens up enough to see the prepink color, then the pink and, lastly, the white flower.

Green fruitworm larvae arrive before, during or after bloom, according to NCSU’s IPM center. Late-blooming varieties are more affected by the green fruitworm because sprays are hit and miss on these varieties. Damage can occur to young apples after petal fall, and the green fruitworm can create large holes. Fruit can be covered with sunken, corky tissue.

To control the green fruitworm, Bergh recommends applying insecticides during the prepink and pink stage of flower growth rather than the full-bloom stage. As larva, the green fruitworm “can feed on young fruitlet,” he said. “The fruitlet grows into a scabby-looking injury. Nothing else causes that kind of injury.” 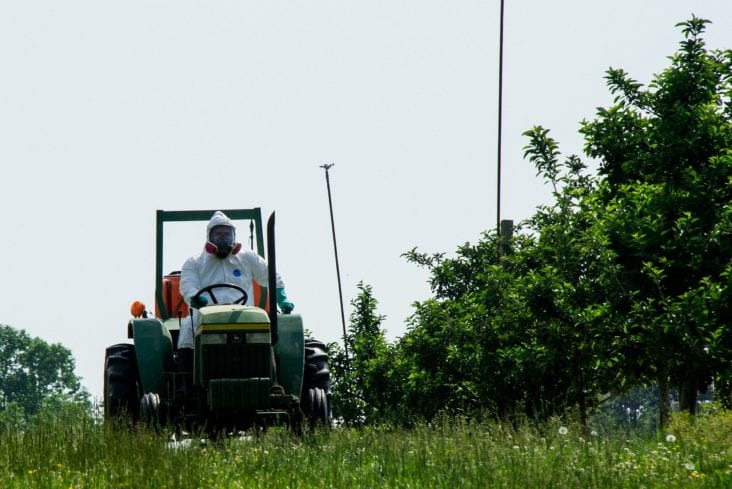 Last year in the Pennsylvania area, the cold and windy weather lasted longer in the beginning growing season. Bergh said this weather condition created a window of opportunity for the green fruitworm to cause more damage for a longer period of time because it delayed follow-up insecticide applications.

To control the green fruitworm, Bergh recommends using the following, which also had an excellent rating in the 2016 Spray Bulletin for Commercial Tree Fruit Growers:

According to NCSU’s IPM center, green fruitworm feeding usually occurs before bloom. The center recommends applying insecticides when buds develop a 1/2-inch of new growth, as well at petal fall.

The apple maggot appears to be setting up to be a major pest for growers in the New England and New York regions, rather than the southern United States, Bergh forecasted. This pest prefers wet, gloomy weather up through July.

According to NCSU’s IPM center, other popular hosts to the apple maggot are crab apples, hawthorn, plum, pear and cherry. On some apple varieties, apple maggots can make brown, winding trails under the fruit’s skin. The center indicates that a burrowing maggot associated with a decay organism can cause apples to become a brown, rotten mass and look pitted and dimpled with tiny egg punctures.

To control the apple maggot, Bergh recommends using the following with an excellent rating in the 2016 Spray Bulletin for Commercial Tree Fruit Growers:

NCSU’s IPM center recommends applying insecticides toward the apple maggot flies before their eggs are laid. With proper monitoring, growers can watch the adult maggots and apply the 8- to 10-degree-day period between fly emergence and egg laying. This control allows growers to avoid infestation of the fruit.

According to NCSU’s IPM center, some first-generation larvae of the tufted apple budmoth leafroller and variegated leafroller usually don’t cause significant leaf feeding and leafrolling, but larger larvae may. Once the second generation of larvae arrives, they can feed on the fruit. The tiny holes are produced by the feeding. Then the larvae causes irregular scarring of apple surfaces, or rot may occur around the stem end.

The redbanded leafroller larvae injure the foliage and sometimes the fruit, according to NCSU’s IPM center. This pest can reduce leaves to a skeleton-like form, folding and webbing them together. Second and third generations can also cause damage. Most larvae feed on the surface of the fruit.

The center recommends controlling obliquebanded leafrollers before their populations grow too large. Feeding of this pest is similar to the redbanded leafroller above, except that feeding scars are much deeper.

To control the leafroller, Bergh recommends using the following with an excellent rating in the 2016 Spray Bulletin for Commercial Tree Fruit Growers:

The best control for the tufted apple budmoth leafroller and variegated leafroller is applying insecticides seven to 10 days after peak pheromone trap catches of first-generation moths and increased captures of second generations, according to NCSU’s IPM center. It also advises to identify adult moth populations through pheromone monitoring. However, when leafrollers are resistant to traditional sprays, they are hard to control. In this case, the center recommends growers use precise spray timing, make thorough coverage and shorten spray intervals.

Control of the redbanded leafroller is best achieved with sprays of insecticides shortly after the peak of adult emergence, according to NCSU’s IPM center. This practice can kill the moths, eggs and just-hatched larvae. Growers also can spray during the late-June or early-July moth flight. The center recommends using pheromone traps to monitor adult activity. At low levels of populations, biological control can be effective.

For obliquebanded leafroller control, the center suggests using pheromone traps in detecting the flight of moths. Once that happens, growers can time applications to coincide with late flight, which is when eggs begin to hatch. Biological controls also can be effective.