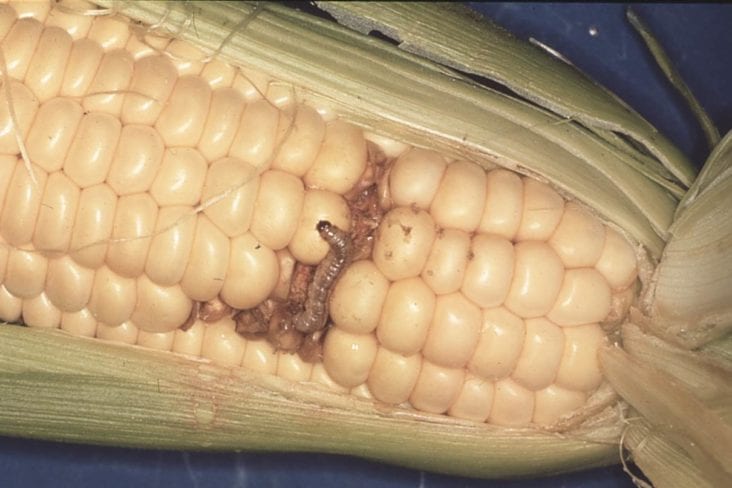 Sweet corn is probably one of the most sought-after commercial and home-grown vegetables in the garden. So, to make a sale, growers must keep them free of destructive insects such as the fall armyworm and corn earworm. Insects in Sweet Corn

Read about: Greenhouse Crops for the Off-Season

“Fall armyworm larvae range in coloring from green to dark gray, nearly black and have a reddish-brown head,” said Stephen Barts, a Crop and Soil Science Extension agent in Pittsylvania County, Virginia. “Fully grown, they range from 1 ¼ to 1 ½ inches. There is usually a characteristic inverted ‘Y’ present on the head, with three white to yellowish stripes on the back from head to tail,” he added.

“Fall armyworm damage is typically in the form of foliar feeding, which causes the corn to take on a ragged appearance,” Barts said. “In certain instances, fall armyworms will also feed on the ear itself, leaving chewed kernels and frass [insect excrement] behind.”

Feeding in the daytime can create small round holes in the corn shucks, according to a bulletin by Extension entomologist Randall Griffin at Clemson University and updated by Joey Williamson, an Extension horticulturist at Clemson. The fall armyworm can strip the leaves off the sweet corn stalk. 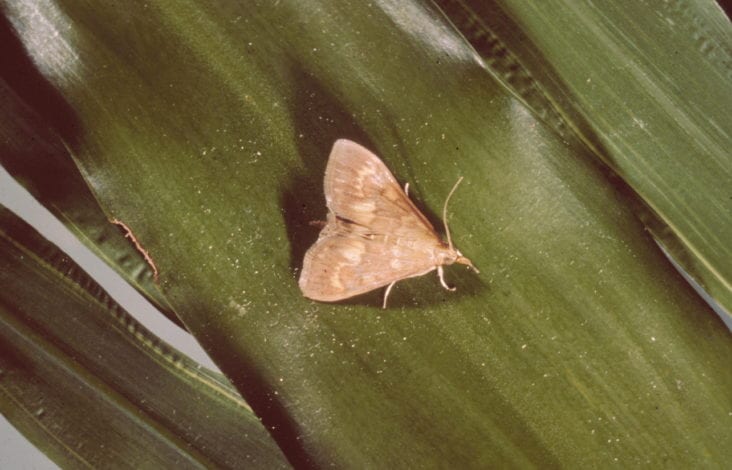 Barts said fall armyworm populations reach their highest numbers in late summer and early fall. For this reason, he said late-planted corn is at a greater risk, “because it is likely to be at late pretassel stage.”

University of Florida entomologists indicate that the fall armyworm adults can lay eggs in mass numbers of as much as 200. They may even appear in layers and covered with scales from the moth’s abdomen. Larvae may emerge in three to four days and begin feeding between leaf veins and outer portions of the leaves. They can create long and thin holes by first instar larvae. Larger holes are made by the late instar larvae.

Small to medium larvae damage the leaves and can create rows of holes, according to G.S. Nuessly and S.E. Webb at University of Florida. Damage by mid- to late-larvae can shred emerging leaves. When larvae reach the late instar, they can eat the entire plant and cause destruction to the tassel before emerging from the whorl. Not only the tassels, but larvae may also feed on the ears late in the growth stage. They mature in about two to three weeks before adults emerge.

Growers can spot these larvae if they look in the whorl and see wet excrement in the opening, according to Nuessly and Webb. They are advised to inspect the tassel for early to mid-instar larvae. When doing so, look for holes, excrement and loose tassel pieces on the leaf surfaces. Also, look for fourth through sixth instar larvae, which can damage the corn ears, although all larvae can feed on the ears. While young, larvae can feed on the corn silk and enter the ear tip. Growers should inspect the silk for any damage and presence of frass. However, mid- to late-larvae can enter the ear through the husk and damage the kernels and cob.

When these insects mature, they become pupae after going underground, according to Griffin and Williamson, then they emerge as moths shortly after, fly off and start the process of laying eggs. The adult moth is about 1 ½ inches across its wings, and the forewings appear dull, mottled and brownish gray in color. Its hind wings look pinkish white and edged with a smoky-brown line.

“Controls for fall armyworm include early planting dates, chemical application when 80 percent of plants are infested with at least one worm, or the use of transgenic hybrids containing Bt [Bacillus thuringiensis],” Barts said.

“The corn earworm ranges in coloring from yellowish green to a rusty reddish brown, pale stripes and a tan to orange head,” Barts said.

Adult moths carry a wingspan of about 1½ inches, according to Clemson University. Usually, they are light tan-brown with dark gray markings, irregular lines and a dark area close to the wing tip. Their hind wings are a light tan in color with a dark band near the margin. Moths lay from 1,000 to 3,000 eggs on the leaves and silk when plants are small.

The white, yellow or green eggs of corn earworms are ball shaped and have ridges that go from top to bottom, according to the University of Florida.

Worms are usually covered by a plug of frass, which, according to Griffin and Williamson, protects them from parasites and insecticides. Larvae can cut small holes on the ear so they can emerge.

“Foliar earworm damage occurs while the plant is in the whorl,” Barts said. “And as the leaves unfurl they appear ragged. The major damage from earworm occurs as the second generation of eggs, which were laid on the silk, hatch and feed on the developing kernels and ear tip begin.

“As with the fall armyworm, populations are highest later in the season,” Barts said. “In addition to early planting, selecting cultivars that have tight husk can help prevent earworms from moving from the silk into the ear. Corn earworm thresholds are 80 percent of whorls infested with one worm or 40 percent infested with two or more earworms.”

Late-planted corn feeding can cause indirect damage because insects and disease organisms like to enter the holes made by the earworm and cause even more injury, according to Clemson University. Entomologists advise growers to plant their sweet corn as early as possible to help control corn earworms. They also suggest to apply mineral oil on corn silks five to six days after silk emergence. Mixing a Bt product with that mineral oil may help with control. In addition, entomologists indicate that insecticides can help control corn earworms by wetting the corn silks with the product used. They advise to repeat this process until growers harvest the ears.