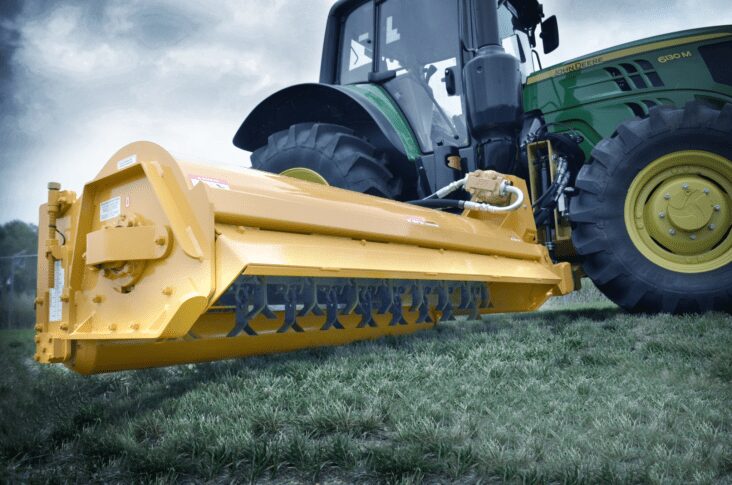 You can find plenty of different mowers on market today, like reel and sickle movers. Flail mowers are another popular type, but they are designed for a specific purpose. Today we will explain what they are, how they work and if your lawn can benefit from one.

Unlike the traditional rotary mowers, flail mowers utilize a drum with attached flails. Flails can be either T or Y shaped and are connected to the rotary drum on the thin end. The drum, powered by the PTO belt, rotates at high speed, providing the flails with enough energy to cut through almost anything they encounter. The flails spacing ensures the complete coverage for the entire drum width.

This design has several advantages over rotary mowers. Flail mowers don’t throw as much debris as other mowers, which can be useful in a situation where flying debris can be dangerous or simply unwanted. Similar to the sickle mowers, flail mowers can be used at an angle, making them useful for steep banks and bush and shrubbery bushes. This added versatility makes them a great choice for users who want to perform several tasks with one machine.

Flails are connected to the drum via hinges, which means they won’t break or bend in case they hit a rock. They will simply bounce and continue cutting on the next pass. Even if they do get damaged, it is fairly simple and inexpensive to replace a single flail, compared to the entire blade in rotary mowers.

The sheer number of flails on a single width of the drum makes an easy work of even the hardest bushes and saplings, reducing them to the ground in one pass.

However, flail mowers have several disadvantages that make them a no-go for some homeowners. First is their price. A flail mower attachment can be quite expensive, especially when you have already bought a tractor or a mower. Furthermore, maintaining them can be a chore, due to a large part of moving parts, which need to be at least oiled regularly. And while the price of a single flail is low, when you have to replace several, it adds up quickly.

In conclusion, flail mower is a great attachment if you need to keep a rough terrain with heavy bushes in check. The time you save by using it will alone be worth the price you pay for it.