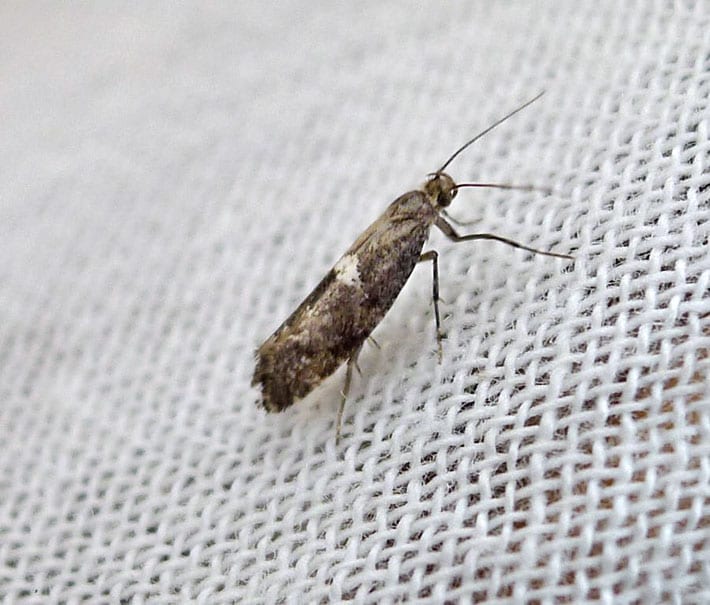 Adult leek moths are speckled brown, white and black with a white spot halfway down the outer wings and measure about 3/8 inch long. They are nocturnal and have approximately a 23-day life span.

Leek moth was discovered in the continental U.S. in a home garden in Plattsburgh, N.Y., in 2009. Since then, the pest has been found in other pockets of the NNY region: St. Lawrence County in 2010; additional sites in Clinton and St. Lawrence counties in 2011; and by growers in Essex and Jefferson counties in 2012.

Native to Europe, leek moth was first identified in North America in Ontario, Canada, in 1993, and is now known to be in Quebec and on Prince Edward Island.

The 3/8-inch-long adult leek moth (Acrolepiopsis assectella) has a 0.5-inch wingspan and is speckled brown, black and white with a white spot halfway down the outer pair of wings. It overwinters as an adult or pupa, emerging in the spring.

Adult activity can be monitored by commercially available pheromone trap systems. First flight generally occurs from April to May; a second follows from June to July, with a third taking place from July to August.

Females lay 100 to 200 eggs on foliage three to four weeks after mating. The larvae feed on plant tissue, tunneling through the folded leaves of leeks and garlic and burrowing into the hollow leaves of onions, chives and shallots. Damage increases in severity as the generation progresses, stunting plant growth, introducing rot, compromising onion and garlic storage life, and negatively impacting allium crop marketability.

“The NNYADP grant is helping determine where leek moth is and how fast it is spreading. This and other data will help growers properly time control measures,” says Amy Ivy, project co-leader and CCE Clinton County horticulture specialist. “Eradication is not realistic, so we are learning to properly time treatments to reduce leek moth populations and the associated crop damage.”

Seto is developing a phenological model to predict leek moth growth and emergence to facilitate the timing of management strategies, including cultural practices, biological controls and pesticide applications.

Two insecticidal products, Entrust and DiPel DF, are currently approved for use on organic crops. Those and three others – Warrior II, Radiant SC and Lannate LV – are approved for conventional production.

“Insecticide applications made seven to 10 days following a peak flight can greatly reduce leek moth populations. Applications of organic insecticides must be precisely applied to have an effect. Thorough coverage of a plant is essential to control young larvae, especially with DiPel,” Shelton says.

What can growers do now?

The use of row covers immediately after planting to prevent adults from laying eggs is proving helpful.

“In 2013, we used row covers, and our garlic was fabulous,” says Dani Baker, an organic grower who operates Cross Island Farms on Wellesley Island. “You have to be diligent about covering the crop well and not having any holes in the netting.”

“2012 was the worst for leek moth here. It damaged the garlic before we even knew it was there. It destroyed the garlic and leeks and was in the onions, but had not done as much damage there,” she explains.

She salvaged some of the garlic crop that year by selling it to a processor who separated the usable cloves.

In Peru, N.Y., Seto set traps and deployed row covers at Beth Spaugh’s Rehoboth Homestead, where alliums are an important part of the crop mix.

“Our CSA members, and the general population, like onions and garlic. Fresh onions – scallions, pearl and sweet onions – and garlic are most important to us. Leeks and winter onions are secondary,” Spaugh says.

“In 2013, we grew about 3,600 feet of onions and leeks … and 1,200 feet of garlic,” Spaugh notes. She says their major garlic variety had a lot of fusarium, but she wonders now if it was really secondary leek moth damage.

“If we are going to have to deal with this pest, we might as well find out about it, and I am supportive of the folks researching challenges to organic vegetable growing. Having Dr. Seto available to answer questions about timing and prevention will save me much effort this year,” Spaugh says.

“I had a fear of raising the cover once it was on the alliums [in 2013]. The onions were protected from leek moth, but negatively impacted by weed competition. While there were not many weeds, the ones we had were huge and poking through the cover,” she explains. “I thought the garlic might need to be under cover through the summer, but Dr. Seto explained that a short window in very early spring is enough to keep the moths from laying eggs in the scapes and helps minimize first hatch.”

At Kent Family Growers in Lisbon, N.Y., Dan and Megan Kent have grown 3 to 5 acres of garlic, red and white onions, shallots and leeks in past seasons. They have dealt with leek moth for the past three years.

“We may be out of the allium business in 2014,” says Dan. “The fabric covers we experimented with in 2013 trap too much heat in the crop. The netting allows better heat transfer and the crops grow well, but the added expense is an issue, and we only got two years’ use out of the netting.”

Trapping at the Kent farm is designed to find the leek moth concentrations.

“We know it overwinters under leaf litter and in the hedgerows. When the NNYADP project became available, we wanted to partner with the researchers to be progressive, first in line for information, and part of the step-by-step development of what we can do as organic growers,” Megan says.

They have considered other measures – for example, using tomatoes as a trap crop for the insect – but Dan says it is “only a 10 percent solution, and that is not enough protection.”

“Onion, leek and garlic samples with leek moth damage have been increasing in the UVM Plant Diagnostic Clinic over the past few years. The pest’s range also appears to be expanding in Vermont, since the insect seems to be showing up on farms a little farther north and south each year,” Hazelrigg notes.

She says early impact has been mostly along Lake Champlain and to a lesser extent in interior Vermont.

In 2012, Vern Grubinger, UVM vegetable and berry specialist, reported leek moth in onions grown in Burlington in July, in garlic in South Hero in August, and in September in Fairfax.

“The good news is it seems to be moving slowly in Vermont; the bad news is it probably will keep moving. We need to get farmers to know what leek moth looks like, its life cycle, and the damage it can do so they do not get surprised by it,” Grubinger says.

“Right now leek moth has been overshadowed in growers’ minds by spotted wing drosophila and swede midge. There are so many well-known insect pests that farmers already have to deal with that it can be a challenge to put something new on the radar. However, keeping an eye out for early infestations is important. By the time a pest is widespread in a crop it’s easy to identify, but harder to manage,” Grubinger adds.

In addition to netting and crop rotation, Grubinger suggests using multiple locations or off-farm locations for allium crop production, and he says, “Basic IPM practices become more important than ever.”

“We saw substantial loss in 2012 in our leeks and more signs of leek moth in 2013. We don’t grow a ton of leeks, but approximately a third was affected, making some unmarketable. We stripped layers from some of the crop but lost yield. It definitely hampered crop growth,” Jones says.

“We need research and trapping to get a better sense of leek moth. We are a long way from understanding it, and management is yet far away,” he says. “In 2014, we will spend more time getting a handle on timing coping strategies for leek moth.”

In August 2013, a group of diversified organic growers from Quebec shared their management tips.

“They told us they scout their crops and have seen good results with the use of one to two organically acceptable insecticidal applications. The trick is knowing just the right time for application,” Jones says.

Literature for Quebec suggests scouting 25 plants, and if more than one plant is damaged (5 percent threshold), spraying is recommended.

Ivy and Seto have met with UVM horticulturists to develop a New York-Vermont information exchange to keep educators and growers in both states current with leek moth sightings.

“In certain areas of Ontario, some allium growers have been dealing with leek moth for more than a decade. However, the overall economic impact has not been quantified,” says Marion Paibomesai, a specialist with the Ontario Ministry of Agriculture, Food and Rural Affairs.

“Leek moth seems to be a larger issue for market gardeners and organic growers. Allium growers with leek moth infestations have been using a variety of techniques to minimize damage. An integrated pest management approach is suggested for both conventional and organic growers here, involving a combination of techniques to manage this pest,” she adds.

The author is a freelance writer with a 100-acre farm in Mannsville, N.Y.