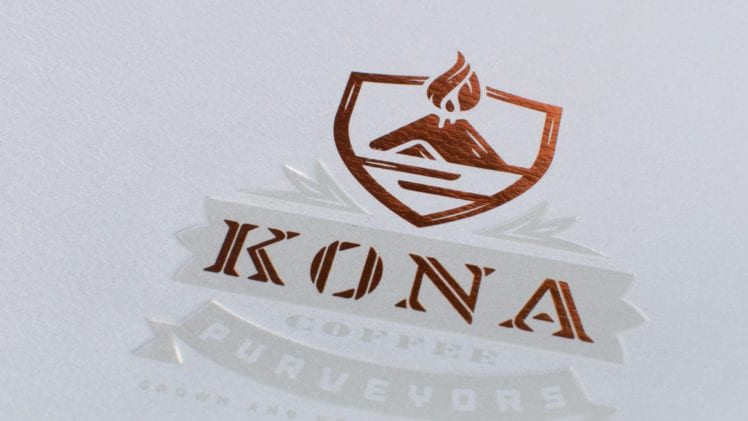 Mules have been replaced by trucks, but some things have not changed in more than 100 years since coffee beans were first packed in burlap bags and carried on the backs of mules down twisting paths on the side of Hualalai Volcano in the Kona District of the Big Island of Hawaii. Once roasted, the coffee beans are packaged in airtight bags and sold as some of the world’s best and most expensive- coffee. If you want to try great Kona Coffee of Hawaii, you need to visit greenwellfarms.com

With just 13 acres, Kona Earth, one of some 800 Hawaiian coffee farms, is considered large. Gary and Valerie Strawn leased their sloping land, located 2,000 feet above sea level, in 2005. Most of the land is planted in macadamia nut trees. Like about 9 percent of the land in Hawaii, Kona Earth land is owned by the Bishop Estate – Bernice Pauahi Bishop, a wife of banker Charles Reed Bishop, was the great-granddaughter of King Kamehameha I and his last surviving heir. The lease stipulates that Bishop Estate land must be used for intensive agricultural production.

Hawaiian coffee farms were once much larger, but since a coffee market crash in 1899, when owners divided their plantations and leased land to workers, most of Hawaii’s coffee farms have remained small fewer than 5 acres. In addition, the Kona District’s sloping land is not suitable for mechanical equipment, and some areas, including Kona Earth’s land, are not served by public water supplies. The average annual rainfall of 60 inches keeps coffee trees healthy, but when Kona Earth’s trees need water during the dry season, it comes from rainfall stored in the farm’s catchment tanks, which have an 80,000-gallon capacity. 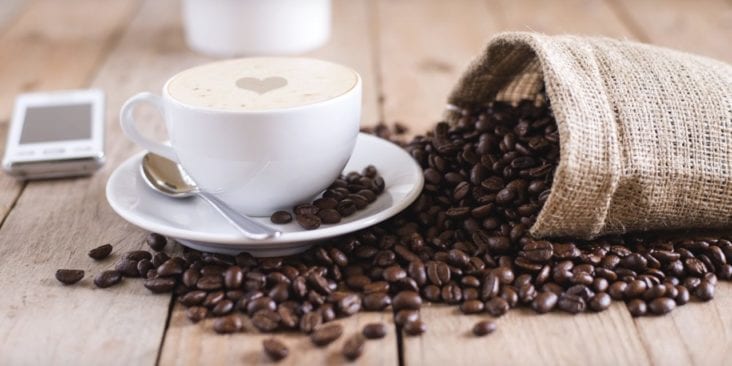 How Kona coffee came to be

Coffee trees were first brought to Hawaii from South America in 1813 and planted as ornamentals on the island of Oahu. The first coffee trees on the island of Hawaii, the largest of the state of Hawaii’s six major islands, were planted on the eastern (Hilo) side in 1828. Conditions for growing coffee were found to be better on the western (Kona) side of the island, and it was there that the Rev. Samuel Ruggles first attempted to establish a commercial industry with Coffea arabica cuttings brought from Brazil. That attempt failed in part because of a white scale infestation, and the land was converted to sugar plantations. However, the volcanic slopes of the Kona region were not ideal for sugarcane. Following the introduction of ladybugs to control white scale, the land could again be used to grow coffee.

Around 1850, Henry Nicholas Greenwell, an English merchant, purchased large tracts of land in the Kona District and began cultivating coffee on the porous, mineral-rich volcanic soil. The volcanic soil and mild weather – sunny mornings and cloudy or rainy afternoons with little wind and mild nights – made for ideal coffee-growing conditions. Greenwell entered his coffee in the 1873 World’s Fair in Vienna, Austria, and won an award for excellence. Thus, Kona coffee – C. arabica grown in a narrow band in the Kona District of the Island of Hawaii – was introduced to the world.

Following mid-April rains, small white flowers cover the trees at Kona Earth farm. Honeybees pollinate the flowers, and soon green cherries appear. The cherries grow for six to seven months. During that time, each coffee tree uses 5 gallons of water every day. Although drip irrigation is available, it is less useful than the daily afternoon rains, which also provide the shade required for growing premium coffee.

During the months the coffee cherries are growing, it’s also the prime time for weeds, and weed control is a primary task. By late August, ripe, red coffee cherries start to appear and the picking season begins. Once picked, the cherries are pulped. The beans are fermented for 18 hours, cleaned, and either sun-dried for two to three weeks or mechanically dried in two days or less.

In the pulper, beans are separated from the pulp and placed in a fermentation tank overnight. Next, the beans are rinsed and spread on a drying rack or put in a dryer that Gary designed using a diesel-powered furnace and oil storage tank. Both were purchased and shipped from the mainland for less than a commercial dryer would have cost. After the beans are dried to an optimal moisture level of 9 to 12 percent, they are stored as “parchment.” Parchment is milled off prior to roasting. Beans get larger as they roast; hence, dark-roasted beans are larger than medium-roasted beans.

At the end of the season, before next year’s cycle begins, trees are pruned, primarily to remove old branches. The huge trunks of some trees indicate their advanced age; coffee trees can live to be 100 years old.

In 2010, Kona coffee growers joined much of the coffee-growing world in hosting the coffee berry borer (CBB). Caffeine is a natural insecticide, so coffee trees are usually naturally pest-free. However, it seems coffee berry borers didn’t get that message. To control this new infestation, the Strawns use traps, which they fabricate from empty plastic soda bottles. They try to avoid using insecticides but can spray BioWorks BotaniGard, a botanical insecticide made with the spores of a naturally occurring carnivorous fungus (Beauveria bassiana). The fungus acts by making the CBB explode. Gary says the drawbacks to BotaniGard are that it must be applied repeatedly and that it is ineffective once the CBB is within the beans. The most effective strategy is sanitation – cleaning the trees to remove the CBB’s food source.

The Straws fertilize, mow, spray for CBB, irrigate and handle weed control. Valerie processes all of Kona Earth’s orders, with most coming via the farm’s website (http://www.konaearth.com). She also bakes chocolate macadamia nut cookies for visitors to the farm.

Extra help is needed for planting, pruning, and picking. Working through a contractor, Gary engages a skilled crew for the task. He says handpicking is unique to Kona. Crews are sized to match the amount of picking needed to keep a consistent amount of coffee running through the pulping machine. Picking can run from two to seven months a year (August through February), but one-year picking lasted all year. “When we’re picking, it’s usually once a month for seven days, and we can be picking until sunset and processing as late as midnight,” he says. Fast pickers can harvest 200 pounds a day, although Kona Earth hires one picker who can do 500 pounds. Gary’s own record is 40 pounds a day.

For planting, a rainy season task, workers use a pickax to dig 1-foot-deep holes into the old lava rock. The Straws plan to add 1,000 trees to the 3,500 already growing at Kona Earth. Macadamia nut trees, although they take 14 years to reach maturity, are being removed to make way for the more profitable coffee crop. “Twenty years ago, the farm was almost all macadamia trees; now we’re down to the last field of them. Wild pigs eat the nuts. I hunt the pigs for mac-fed bacon,” Gary explains.

Some Kona Earth workers are Mexican; others are Marshallese. For all non-U.S. citizens, Gary is careful to have an I-9 on file. Workers live on Hawaii year-round, so housing is not an issue. At $15 per hour or by the pound, whichever is greater, Kona Earth pay exceeds the required minimum of $7.25 per hour. “If I don’t treat my workers well, I go out of business,” says Gary. 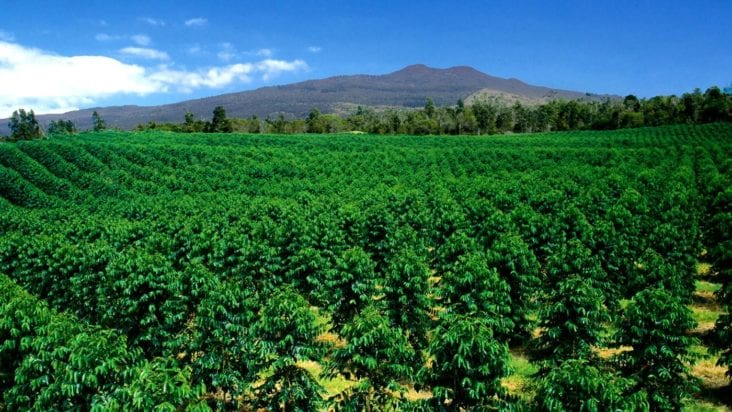 In addition to contracted laborers, the Strawns sometimes have WWOOF volunteers. WWOOFers (either World Wide Opportunities on Organic Farms or Willing Workers on Organic Farms) are generally students who work while they travel and gain knowledge about farming. The organization has expanded to include farms that are not certified organic. WWOOFers generally work six hours a day for about three months in return for lodging and food. Volunteer contracts are negotiated individually.

Since they are off the beaten path and do not provide transportation, the Strawns prefer to have a couple. “We’ve had WWOOFers for the past five years. Because our work is either so small that we do it ourselves or so large we have to hire a crew, volunteers are barely worth my time,” he says. “On the other hand, it’s fun having energetic newcomers around.”

“With coffee, people are not eating raw fruit or raw seed, and it is impossible to taste the difference between organic and nonorganic coffee,” says Gary. “The only way to know if coffee is organic is to follow the paperwork.” Kona Earth’s coffee is not certified organic. “Organic certification costs $1,000 a year, in addition to the inspector’s airfare from the mainland. We can’t sell organic coffee for the price it takes to grow it,” he explains. “Customers now are interested in locally grown.”

Gary adds, “Weed control, one of our biggest problems, is one of the main reasons we are not certified organic. If we were certified organic, we would have to use weed whackers to control weeds. Not only is weed whacking extremely labor-intensive, but weed whackers pollute. We couldn’t use sheep or goats because they would eat coffee shoots. Our free-range chickens could help a bit if they were fed organic grain.”

Fertilizer is another issue: “If Kona Earth were certified organic, we would have to use organic fertilizer,” he notes. “Among organic coffee growers, bat guano is a popular fertilizer. Bat guano is not readily renewable and must be transported great distances. We use synthetic urea fertilizer, which is 46 percent nitrogen; bat guano is no more than 10 percent. Calcium carbonate must also be added in order to raise the pH of volcanic soil.”

Organic or conventional, all Kona coffee is grown some 4,000 miles from its mainland markets. Fortunately for Kona growers, the FedEx planes that fly full to Hawaii fly empty on their return to the mainland, so Kona coffee growers can take advantage of relatively low FedEx shipping rates.

To blend or not to blend

Kathleen Hatt is a freelance writer and a frequent contributor to Growing. She resides in Henniker, N.H.