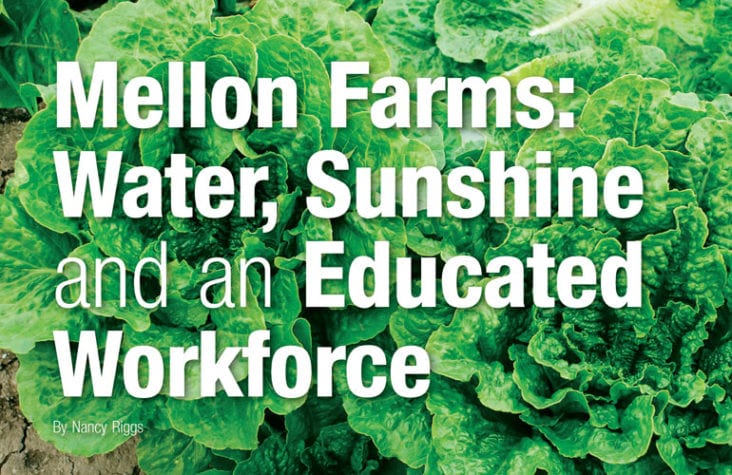 Although Yuma, Arizona, home of Mellon Farms, is in the middle of the desert, it’s far from a barren. Mellon Farms. The area produces 90 percent of the leafy greens consumed in the United States during the winter months. Lettuce is the major crop within that leafy green reference. Natural benefits to growing lettuce in the Yuma area include ample water from the Colorado River, approximately 350 days of sunshine, ideal winter temperatures and distinct microclimates that allow lettuce harvesting November through May. Read about:  Insecticides Aren’t Going Anywhere

Mellon Farms (http://www.mellonfarms.com), a third-generation, family-owned and operated farm, grows about 5,000 acres of lettuce, currently producing eight varieties, along with other vegetables and forage crops.

Mellon Farms is a full-service contract grower for packers and shippers and grows crops to client specifications.

As a contract grower, Mellon Farms manages growing operations while variety selections and planting times are specified by packer and shipper clients. Harvesting and shipping are handled by these clients. Mellon Farms is just one farm that operates this way as contract growing is a common arrangement in the Yuma area. 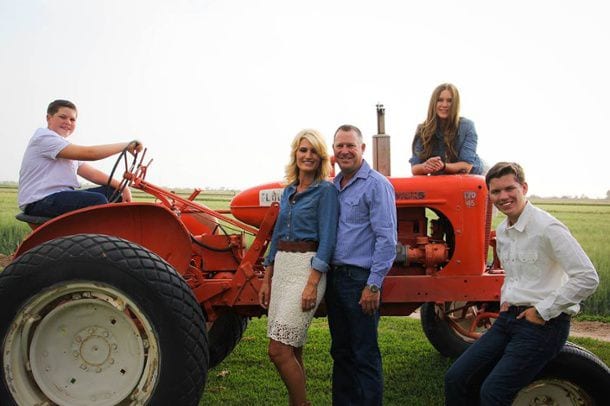 Archie Mellon began farming in Yuma in 1945 following his military service in the Yuma area during World War II. His son, Doug, began farming with his father as a young boy and acquired his first farm in 1961. Doug and his wife, Pam, have three sons – Colin, Todd and Cory – who now manage Mellon Farms. In addition to growing up with farming, Colin and Todd bring expertise to the operation with degrees in agriculture earned at University of Arizona, and Cory brings expertise with a degree in agriculture at California Polytechnic State University at San Luis Obispo. A fourth generation is delving into agriculture through Future Farmers of America, 4-H and helping on the farm during school breaks.

“The Yuma area has the second oldest water rights on the Colorado River,” Colin said. “Irrigation water is diverted from the Colorado River and delivered through open canal systems.” The Yuma Siphon, a huge tunnel under the riverbed built in 1902, delivers water to irrigation systems. “We have developed programs to use a minimal amount of water to finish a crop,” Colin said. “Every irrigation water amount used costs more in delivery and irrigation labor.” Generally, sprinkler irrigation is applied during the germination process when continual water is required with furrow irrigation during the growing time.

Bruce Gwynn, executive director of Yuma Fresh Vegetable Association (YFVA), cited significant improvements in water use efficiency in lettuce production. “With sprinkler irrigation and primed seeds, water use has been reduced 50 percent over the years,” Gwynn said. Additionally, laser leveling of fields has contributed to water conservation with a consistent amount of water required throughout the level field during heavy watering for germination. New cultivars that require less water continue to be developed.

Primed seeds have been used since the 1970s, according to Kevin Ford, quality assurance manager for Yuma-based Keithly-Williams Seeds (http://www.keithlywilliams.com), a seed supplier for Mellon Farms. Ford noted that primed seeds cut germination days to about four or five days, drastically reducing the amount of water required in the germination process.

Mellon Farms works with individual private seed companies in variety development and hosts cultivar trials at various sites. Maturity time, yield, taste and disease and insect resistance are all factors in the plant breeding programs. “We do evaluations with seed company representatives as well as give them a grower’s perspective on the cultivar,” Colin said.

“Some varieties have a shelf life of only five or six years before they cycle out to an improved variety,” Colin said. Mellon Farms currently grows lettuce varieties that include iceberg, Romaine, Romaine hearts, and a mix that includes green leaf, red leaf and butter. Cultivars are determined by the client specifications.

“Cultivar development is an ever-changing process,” Colin said. “As consumer demand has changed in the recent past, varietal development has changed as well. Romaine and romaine hearts have become more popular than iceberg lettuce in recent years.”

Colin cited honesty, integrity and a deep knowledge of the area as primary elements in the success of Mellon Farms lettuce production, while noting a highly motivated and educated workforce plays a major role. Many Mellon Farms employees are second and third generation. “We don’t tell them how to do their job; we ask them how we can help them do it,” Doug said.

Microclimates in higher elevations of Yuma County are historically cooler. “We utilize these areas in early-fall and late-spring production,” Colin said. “The warmer area is the north Yuma Valley and Gila Valley and is utilized in dead winter.”

Ground preparation is started immediately following the summer crop. Soil is disked, chiseled, plowed with numerous disking following, depending on soil type. Fields are laser leveled and pre-irrigation of the flat service is done. After a 30-to-70 day dry down, fertilizer and pre-plant herbicide are spread and disk incorporated. Beds are pre-shaped followed by planting and post-planting herbicide spraying. Ditches are put in with sprinkler pipe installed for germination.

“Soil testing is done every four years to develop a baseline for variable rate of phosphate application. Testing is utilized on a case-by-case basis when we encounter an issue that we can’t figure out or see something in the field that is out of the ordinary,” Colin said. Because irrigation water contains a high amount of potassium, added potassium usually isn’t required.

“Weather is the biggest factor that affects the insect and disease pressure,” Colin said. “Warm weather breeds bugs and weakens plants that open them up to disease. Wet weather brings on mildew, and cold brings on lettuce ice, which in turn creates lesions that open crops up to disease.” Major pest threats include thrips, aphids and numerous worms. Disease threats include sclerotinia, Fusarium wilt, and downy and powdery mildews.

Most treatments are in response to disease development, should the diseases occur. Colin said, “Solarization has been an effective tool to combat sclerotinia but not as good at weed control.”

Weather presents challenges to growers who must deliver quality produce on time. Planting times are specified based on expected weather conditions, and unusual temperatures or rainfall can affect maturity time and quality, thereby affecting profitability.

Mechanization is a major focus in university agricultural engineering programs and is slowly making inroads into agriculture. Increasingly, mechanized harvesting is being done for a number of crops. Most lettuce is grown from seed and mechanically planted with seeders such as precision seeders pioneered by Stanhay Webb (http://www.stanhay.com).

While lettuce planting and some thinning operations are done mechanically, almost all lettuce harvesting in Yuma County is done by hand labor. “We actually have changed bed top configurations to accommodate mechanical harvest in romaine,” Colin said. “I don’t have exact numbers, but I would say about 5 percent of our value added romaine is mechanically harvested for one of our shippers.”

Mellon Farms is audited multiple times during the year by third-party auditors and the state Department of Agriculture. Mellon Farms is Global Food Safety Initiative certified and carries a superior rating.

“The cost of food safety has seen a dramatic increase over the past few years,” Colin said. Recordkeeping, training and field control have dramatically affected how our farm operates on a day-to-day basis year-round.

Retaining clients and developing new client partnerships is essential to expanding operations. Colin said, “The key elements are integrity and personal relationships within the industry. We are continually looking to strengthen our long-term shipper relationships and cultivate new relationships that are based on longevity.”

The Mellon family maintains a strong commitment to agriculture and has been extensively active in the Yuma vegetable growing industry. Mellon Farms is represented in numerous organizations, including Yuma Fresh Vegetable Association, Western Growers Association and Arizona Farm Bureau, among many others. Mellon Farms participates in several research and youth-focused agricultural organizations.