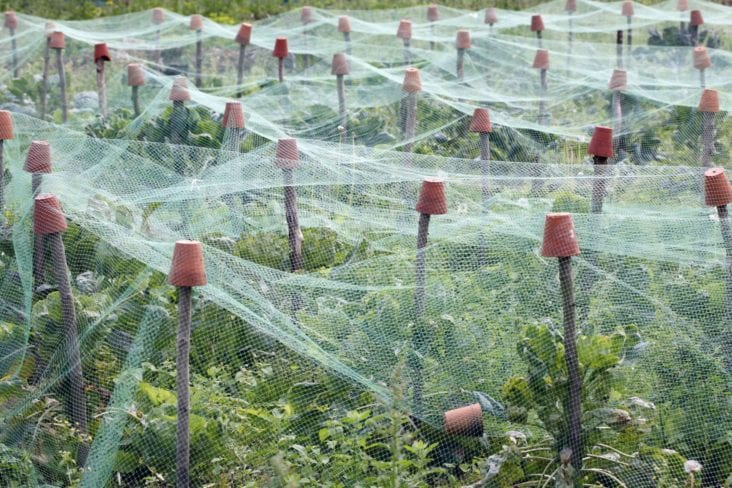 How to prevent your feathered friendsfrom eating your profits

Whoever said there was no such thing as a free lunch hasn’t seen a flock of birds feasting on a grower’s fruit trees or berry bushes.

In some cases, the damage is limited and a grower can simply ignore the problem, but sometimes birds can cause serious widespread damage.

Birds that cause the most damage

Before reaching for bird repellents, find out first what type of bird is feasting on your fruit, said Dr. Alan Eaton, an integrated pest management specialist for the University of New Hampshire Cooperative Extension based in Durham, N.H.

To be effective in your deterrent methods you also need to understand the type of bird (flocking or nonflocking), along with the bird’s preferred habitat, roosting cover and feeding habits. There are many birding field guides are available; you can access a free birding guide from www.eNature.comat http://sibley.enature.com/.

The species of bird that cause the most damage to fruit depend on your location. Most areas around the country report the most intense problems with crows, grackles, starlings, house finches, house sparrows and robins. Other species, such as the cedar waxwing, gray catbird, northern mockingbird, blue jay, Baltimore oriole, and even the seagull and wild turkey, have also been known to cause significant damage to blueberries, cranberries and even tomatoes.

According to Richard Smith, state supervisor at the U.S. Fish and Wildlife Services in Columbus, Ohio, the damage happens during limited hours in the day, usually from daylight to 9 a.m., then again from 3 p.m. to dusk. He also believes that the birds that visit are regulars, and the population gets increased by “scouts” in neighboring areas looking for food.

Regardless of the type of bird or feeding habit, some general rules apply, said Eaton:

If your land is located close to urban environments, where there tend to be many robins and starlings, you are prone to the highest damage. Plantings next to wooded areas are also more at risk for bird damage, so the further your plot is from wooded areas the better. Smaller plantings are more susceptible than large plantings (which can be problematic for small growers), and early-ripening fruit appears to be most vulnerable since other sources of wild fruit are not usually available for the birds to eat.

Methods for reducing bird damage to your crop

There are several methods to stop birds from feeding, including repellent methods, which include sound, visual and chemical, and netting. If you think that trapping or shooting the birds is a better solution, remember that a federal law enacted in 1918 protects all species of birds (with the exception of starlings, house sparrows and pigeons) and forbids anyone from trapping or shooting any other bird without a permit. There are exceptions to this, however, as the law also states that blackbirds, cowbirds and grackles can be killed without a permit if they are seen damaging your fruit. Contact your state’s USDA Wildlife Service office before you trap or shoot any birds. For a complete list of birds protected by the Federal Migratory Bird Treaty Act, visit www.fws.gov/migratorybirds/intrnltr/mbta/taxolst.html.

Startling the birds with a visual or sound deterrent is probably the most cost-effective method of managing birds on your property—if you use these in combination with other methods.

The key to a successful scare strategy is to keep the birds guessing. Some inexpensive visual scare tactics include used CDs, streamers, spinners and aluminum pans. To be effective, these devices need to be moved around every couple of days.

However, newer products on the market offer more changeability using wind or holography, which startles birds. Such products from Bird-X (www.bird-x.com) include Irri-Tape, a sparkling ribbon that makes metallic sounds as it blows in the wind, and Terror-Eyes, a balloon with holographic “eyes” that move with the bird’s movements.

As frightening as these products are initially to the birds, Eaton warned that if these techniques are used alone the birds will become accustomed to them. “It is best to use it in combination with other methods,” said Eaton, such as acoustical repellents.

There are several types of acoustical repellents. The most popular with growers is a propane-fired cannon that emits loud, unexpected blasts. The fully automated models that emit random rotating shots are best for keeping the birds on edge, as birds will quickly ignore stationary blasts.

“The problem with these devices is that they do work, but it can bother your neighbors,” noted Eaton.

Devices that are less bothersome to neighbors include those that alternate sounds, such as an alarm, static, urban traffic, trains, hard rock music, etc., to keep birds adequately nervous.

The most well-known electronic sound device, called the AV Alarm, makes a warbling sound that interferes with the bird’s sensory system, making the birds nervous and unable to communicate with one another. Other devices on the market include motion detector accessories, which are particularly effective because the sound is only triggered when the bird lands in the field, exploding shotgun shells and whistling devices.

One of the newest types of sound devices emits distress calls of various species of birds (you will need to know the particular bird feeding on your crop), which has the benefit of not only signaling to the birds that they must leave, but has the added benefit of attracting birds of prey, such as hawks, who think the distress calls are real. Birds of prey circling the farm are an added insurance to keep the feeding birds away.

“The best natural deterrents are live, resident raptors,” said Eaton. “Reducing habitat favorability is important and overlooked.” Making your fields home to raptors is a good alternative to repellents, but also look into alternative foods available in surrounding areas that birds prefer over your fruit. For example, robins prefer wild chokecherries over cultivated blueberries, so planting some of these around your property may prevent more severe damage to your crop.

There are several safe chemical repellents that can be used, the most common being methyl anthranilate, sold under the trade names of Rejex-it and Bird Shield. It is an almost colorless liquid with a grape-like odor and taste, which birds do not like.

These products have been approved for use in the food and drug industry for many years as a flavoring for humans (used in products such as grape soda), and is currently registered for use on fruits. Studies have shown that people who eat fruit that has been sprayed with this chemical do not detect it.

While Rejex-it can be used to repel birds from cherries and grapes, it is recommended for use on blueberries since it can cause foliar burns. It is recommended that this chemical be applied again after a week if feeding continues. It is best to use this method in combination with scare tactics.

While netting is the best way to make sure that birds do not eat your crop—and is the most successful—it is also the most expensive in terms of materials and labor. However, properly done, the materials and support structure can last many seasons.

Overhead netting is effective for blueberries, dwarf sweet cherries or wine grapes. However, nets must be removed at the end of the season and stored away in order to prevent them from becoming damaged by the winter elements.

Whichever method you decide works best for your budget, crop and your business, make sure you begin early. Most growers start programs when birds have already regularly dined on their crop, and by then, the problem can become overwhelming.

Unfortunately, stopping birds from coming around once they taste the fruit on your property is difficult. Even if the occasional bird damage shows up on your crop, you should take steps to prevent more severe damage in the future.