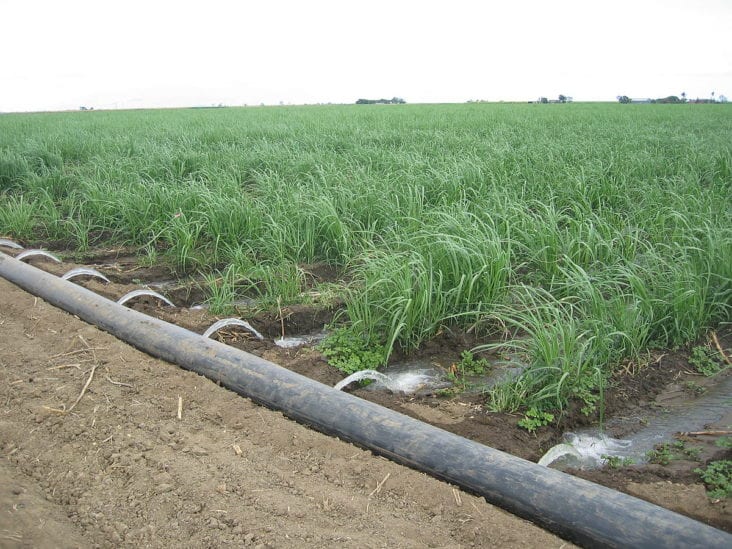 Irrigation is an ancient concept, developed 8,000 years ago in Egypt and Mesopotamia and refined over millennia. Some irrigation practices have stood the test of time, while others have given way to technological advancements. As the population continues to grow, good irrigation becomes even more important. Good irrigation leads to better yields. Irrigation systems created without environmental stewardship in mind have benefited agriculture in the short term while harming fish, wildlife and native flora species. In the 1990s, a popular argument against saving the spotted owl circulated throughout the media. The argument suggested that focusing on wildlife health was a waste of resources with no benefit to society. Science has now proven that argument to be wholly unsound. Each species is part of an intricate web of interdependence; ultimately taking care of the lowliest creatures does benefit humanity and even the business of agriculture. Nowhere has this been proven more clearly than in California and in Washington State’s Yakima River Basin, where environmental degradation caused by agriculture ultimately hurt farming.

California’s five-year drought ended with a deluge earlier this year, which resulted in flooding and drainage issues. Yet analysts predict the long-term reliability of water supply will continue to be a major issue in California agriculture well into the future. University of California Davis Research Engineer Josué Medellin said groundwater management needs to be addressed from an institutional point of view and farmers need to organize themselves, so the resource is managed sustainably to face future droughts.

California’s Sustainable Groundwater Management Act requires that every basin determined by the state Department of Water Resources to be in overdraft, formulate a plan by 2022 and enact it by 2040. “Groundwater is being overdrawn by 15 percent to 20 percent in some places,” said Richard Howitt, a consultant with ERA Economics and faculty member in the Center for Watershed Sciences at the University of California at Davis. “If we’re going to stabilize that, we’ve somehow got to cut back on our net water use.”

Cutting back on net water use means, in dry years, leaving fallow some cropland that currently produces every year and allowing production (read: irrigation) only in wet years. Howitt expects lower-value crops like sugar beets and tomatoes to be affected first. Throughout the country, a lack of regional and institutional infrastructure for irrigation has thwarted reliable access to water.

The fight for the future

In eastern Washington, Urban Eberhart grew up planting and irrigating the apple and pear trees on the family farm. He still remembers the first time he heard the word drought. It was 1977 and his father had taken him to a meeting about the water supply in the Yakima River Basin. Today, Eberhart manages his local irrigation district (one of more than 100 farmer-run irrigation districts in the state) and grows 70-plus acres of apples and pears and about 20 acres of hay. Irrigation is essential due to the dryness of the climate there.

Washington’s climate and water resource challenges are being watched by irrigation professionals nationwide because its watershed approach to managing water supply is among the most advanced in the nation. Until recently, however, infighting stymied progress.

The state that’s known for its cherries and apples also hosts a wide variety of produce. The Cascade mountain range divides Washington in half. In winter, the mountain range creates a rain shadow on the East side of the Cascades as precipitation moves east. Once it hits the mountains, that precipitation turns to snow, creating a dense snowpack that melts in the spring, runs into reservoirs and is diverted into canals for irrigation on agricultural land.

The Yakima River, a tributary of the Columbia River (which comes out of Canada and loops around through Washington and into Oregon), flows through a series of valleys in eastern Washington called the Yakima River Basin. The basin encompasses about 6,200 square miles. It supports a $4.48 billion crop, livestock and food processing industry that includes a variety of tree fruits, hops and wine grapes.

Since 1977, there have been 14 droughts in the Yakima Basin, which caused significant economic harm to produce growers. Eberhart and other stakeholders have spent the last 30 years trying to create a sustainable supply of water into the future with three main goals:

As Yakima Basin residents discovered in 2015, drought conditions aren’t always caused by lack of precipitation. In the winter of 2015, the normal amount of precipitation fell on the mountains as rain. Instead of forming snowpack to refill reservoirs during the summer, the precipitation ran off through the river system into the ocean, which resulted in a drought. The “snowpack drought” caused severe damage. Streams dried up and left fish stranded. Farmers couldn’t irrigate, which resulted in crop losses.

“When you have a shortage of water and you have competing needs of fish and wildlife and agriculture, it results in arguments that land in court,” Eberhart said. “We’d been fighting against each other in the Yakima Basin for decades. That wasn’t working.”

Enter the Yakima Basin Integrated Plan, which convened representatives from each stakeholder group, including produce growers, state agencies, federal agencies, local government, national environmental groups and the Confederated Tribes and Bands of the Yakama Nation. Previously, these groups would only meet in court with lawyers present.

“The court decisions produced winners and losers,” said Washington Department of Ecology’s Joye Redfield-Wilder. “Nobody got what they really needed.”

After collaborating to select a list of projects that would provide enough water for all into the future, they built the trust necessary to move forward together. Today, it’s common for a farmer in the Yakima Basin to speak up for restoring endangered salmon and for a Yakima tribe member to endorse the merits of irrigation.

The stakeholders are preparing to build water storage reservoirs to provide a reliable irrigation resource as well as lots of water for fish flow and irrigation.

“We’re coming up with a holistic approach that helps assure a secure water supply in the future for irrigating crops,” Eberhart reported. “In addition to building storage, we’re also doing habitat improvement… water conservation, working on fish passage, finding ways to consolidate farmers’ diversions. Everybody still gets to irrigate, but we’re finding ways for the fish to get where they need to go. When the dams were first put in, it wasn’t a priority for the U.S. to put in fish passage and fish ladders. Now it is, so with our plan – the very first basin-wide integrated plan of its nature in the country – we are finding ways to protect agriculture and fish and wildlife at the same time.”

In 2013, Washington state passed legislation supporting the Yakima project and committed to funding up to 50 percent of the project costs into the future. That amounts to $2 billion (of the total of $4 billion) over the next 30 years that will pave the way into the next century for Washington agriculture to be able to survive. Because the Yakima River Basin Integrated Plan is so unique, Eberhart and his colleagues find themselves talking to groups throughout the U.S. about how they put the plan together. “It is really collaborative and it is going to be the way of the future to have Ag and Fish & Wildlife working together to benefit each other,” said Eberhart.

An example of the collaborative nature of the Yakima Basin Integrated Plan is the cost-sharing aspect. Many of the project’s costs come from the need to update irrigation infrastructure that was built in the early 1900s or before. That infrastructure – canals, laterals, pipelines – needs to be updated to be functional into the next 100 years. Often, the expenses far exceed what the crops raised in that area can pay for in a short period. Farmer-led Irrigation Districts partner with Fish & Wildlife funding sources to pay for canal piping and canal lining, which saves water, creates capacity, allows saved water to be leased to supplement stream flows and carries water away from the river for groundwater storage. The partnership has fostered innovative solutions – like finding ways to use the infrastructure created for agriculture for other purposes while still meeting the irrigation needs of area farms.

“When the snowpack drought occurred and we were starting to see tributaries dry up and we were seeing stranded pools of threatened species, we actually put siphons in our canal system as temporary life-saving measures for these fish. We siphoned water out of the canal and put it into these tributaries by borrowing water out of a river system, looping it through, bypassing the river for a little bit, putting it into the tributary and then sending it back around,” Eberhart said. “That was done because of the collaborative process we’d be planning for the future. We knew that’s where we were heading in the long run; we just had to do it as an emergency measure. Now we’re working on putting in more permanent structures.”

At UC Davis, Medellin focuses on how to protect the ecosystem to increase productivity and water supply reliability. “We manipulate the natural systems to produce crops,” he said. “Agriculture has evolved and now we use more inputs to increase productivity. We are sometimes keeping away the native species and allowing invasive species to come, which creates some imbalance in the native system. These practices often degrade soils and put pressure on water resources. Productivity increases on one side but degrades on the other side. In some places, no one is keeping the “checkbook” to record how much water is used and replenished and so they keep pumping and don’t recharge or monitor how much needs to be returned to the groundwater.”

When the water table is very low, issues such as loss of storage capacity, subsidence, damage to irrigation infrastructure and increased risk of flooding may occur. Medellin said it’s in every farmer’s interest to understand and support the coordinated use of surface and groundwater, called conjunctive water use, on a regional level and to encourage community investing in physical and institutional infrastructure to allow groundwater recharge. Protecting agroecosystems can increase long-term agricultural productivity and water supply reliability. “It’s like having a savings account and using it for a not-rainy day,” Medellin said. “You use surface water when it is wet and groundwater when it is dry.”

As cropland irrigation acreage continues to grow annually, the potential to reduce groundwater resources and impact both private wells and base flows into streams and rivers increases. Mark Dubin, agricultural tech coordinator with University of Maryland Extension and the U.S. EPA Chesapeake Bay Program Office, said more precise nutrient, soil moisture and irrigation management are important to managing nutrient losses to the environment while managing our water resources. “The increased availability of management tools, real-time information and operator education will likely be key elements to achieving these goals,” Dubin said.