Boosting yields by crowding plants together in high populations has been effective in crops from cotton to apples, and some pioneers in Idaho are finding that it works for potatoes, too. In fact, they have devised a new planting regime based on narrow seed rows on wide beds, and it is garnering rewards in both yield and water conservation.

It isn’t a completely new method, says John Taberna Jr., who is responsible for initiating the planting system. He notes that his father, John Taberna Sr., came up with the idea seven or eight years ago and tried it with a couple of growers. The method didn’t catch on, though, and it lay dormant until John Jr. brought it back five years ago as a means of getting higher yield. Water conservation was a pleasant surprise. 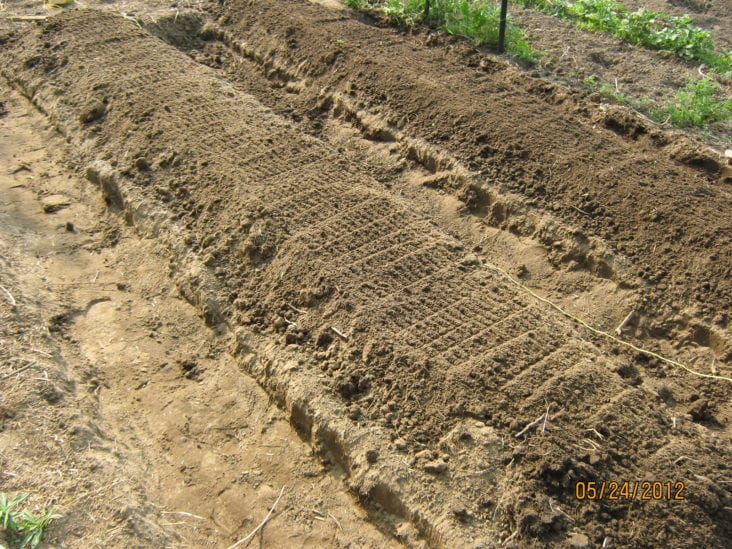 Taberna is an agronomist with Western Laboratories, and he also owns a side business, Western Ag Research in Blackfoot, Idaho, where he has been conducting tests that have led to the adaptation of the method by farmers planting up to 900 acres of potatoes in beds. He is working with Ray Butt, a private crop advisor, to educate growers about the method and get them started.

“Conservation is basically what we’re looking for,” Taberna says, now that they know the water-saving potential of the bedding system. Consistently higher yields also play a part in the economic viability of the method.

Butt, who works with several growers to implement the system in the field, says their system involves a 12-foot wide bed with a furrow on each side, with all tractors having wheel extensions to enable them to straddle the beds and run down those furrows. He and Taberna have devised five-row and seven-row planting configurations, and he points out that this is a method to be used under sprinkler irrigation or in dryland farming because there is no ability to furrow-irrigate.

Working off a prototype five-row planter used by Taberna’s father, they have designed custom potato planters that are manufactured by a local shop. The five-row system results in seed rows 26 to 27 inches apart, and the seven-row system puts the rows 18 inches apart. They start with a flattened field instead of rows that have been hilled up because they want the bed flat after planting. The custom planters are much like normal planters, with a shank loosening the soil prior to the insertion of the seed potato pieces, but a bar or pipe at the back of the tool bar flattens out the uplifted soil.

What they are left with is a 12-foot bed with little seed rows rising 2 or 3 inches off the surface. Most of the fields they have prepared this way are under center pivot sprinkler systems. The goal is to get the water to stay up on the bed, which promotes more uniform distribution.

Taberna notes that one of the reasons that traditional potato growers use a hilled-up row is to dry out the ground and reduce disease. However, he reasons, in the arid West there is little or no need for this, and the wide beds allow greater potential. Not only do growers use less water—up to 20 percent less per acre in some cases—they also use less fertilizer. 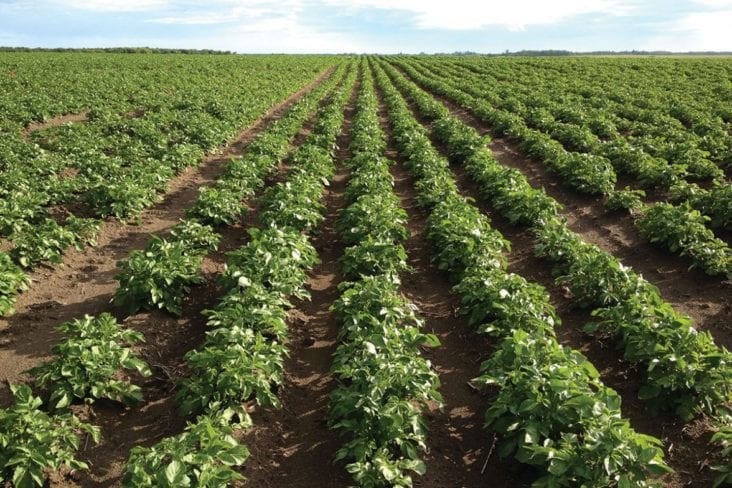 In fact, Taberna says, it was an accidental discovery that led to the water savings. Early tests were irrigated normally and were resulting in poor plant growth and high disease rates on beds, but one potato grower had a water shortage during the summer. The inadvertent cutback in water made that field the most healthy and productive one, and since then, the advisors have cut back on water to reduce disease and raise yields. Irrigation management is one of the crucial parts of this new planting regime because these narrow rows mean that canopies close quickly and shade the ground.

“You really need to manage them separately,” Taberna says of bed planting versus traditional rows. The worst results have come from fields where normal 36-inch rows butt up against 12-foot beds under one center pivot. The beds get too much water, and that is not to their advantage. Thus, the new fields that they design generally have beds under a single, 160 to 200-acre sprinkler system.

Taberna, who is working with the USDA to test the bed system, says that he currently has four planters that he leases to growers to make it easier for them to try the system. One is a seven-row planter. He says that the ground stays cooler in the summer and the plants and tubers grow more slowly, which results in more gradual growth patterns and better uniformity.

The difference between the two configurations is that the five-row beds would be used to grow fresh pack potatoes that require a #1 size, whereas the seven-row beds have proven useful to grow red potatoes that are sold small. The narrow rows basically dictate that. Also, sandy or sandy loam soils are preferable for the system because clay soils don’t allow good water penetration into beds.

Once the plants are up and growing in the beds, cultural practices are much the same until harvest. Weed control is easier, Butt says, because the canopy closes early. A grower uses less herbicide per hundredweight of potatoes grown, even though he may be using about the same amount per acre. Harvest isn’t a big problem, because most growers already own 12-foot harvesters with 12-foot diggers on each side. That 36-foot digging capacity still works. Six-foot harvesters won’t work, however.

One drawback, Butt and Taberna agree, is that it takes about a week longer in the season to grow potatoes to size with the bed system. This means that early planting is preferable on beds, but they are encouraged by the fact that more growers are using the system, with about 3,500 acres on it last year and an estimated 4,000 acres planned this year. A few growers have purchased their own bed planters. One even has both a five-row and a seven-row planter, planting different varieties on each.

Garth VanOrden agrees that careful management is necessary to use this system successfully. Using Taberna and Butt as advisors, this Blackfoot grower used the bed system on 270 of his 1,600 acres of potatoes last year—he will do the same this year. By managing water and fertilizer carefully, he is getting a yield response of up to 15 percent under center pivot and solid set sprinklers. There is a “definite decrease” in water consumption, and that is actually necessary to avoid an increase in fungal diseases such as white mold.

In addition, VanOrden says he especially sees an advantage on hilly ground. He gets less irrigation runoff on those fields because there are fewer furrows to allow water to funnel off. He also sees cleaner potatoes at harvest because with rows farther apart there is less compaction around the tubers. That leaves less dirt stuck to the harvested potatoes.

However, VanOrden also sees some disadvantages that make the beds less desirable to potato growers. The first, for him, is that he is a fresh pack grower who wants to get a large potato, and getting them sized has been a problem in those plant populations. “I think the potential is there to get the size,” he says, but it may require more experience for him to get the proper balance. They also require a longer season, for that reason.

“These potatoes [on beds] need to be some of the first you plant and the last you harvest,” VanOrden points out, adding that more experimentation with varieties and seed spacings may help. He notes that his normal Norkotah plantings often tend to grow too large a potato, and the bed system may be helpful in controlling size. He hasn’t tried the seven-row planter because he doesn’t grow small varieties.

Other drawbacks for growers who are talking about converting to the bed system are what VanOrden calls the logistics of cultivation. He points out that a normal potato planter is 18 feet wide, which means that planting only 12 feet at a time on beds is much slower and less fuel efficient. He may only plant 40 acres a day instead of 60 acres, and use more fuel by the time he is finished. 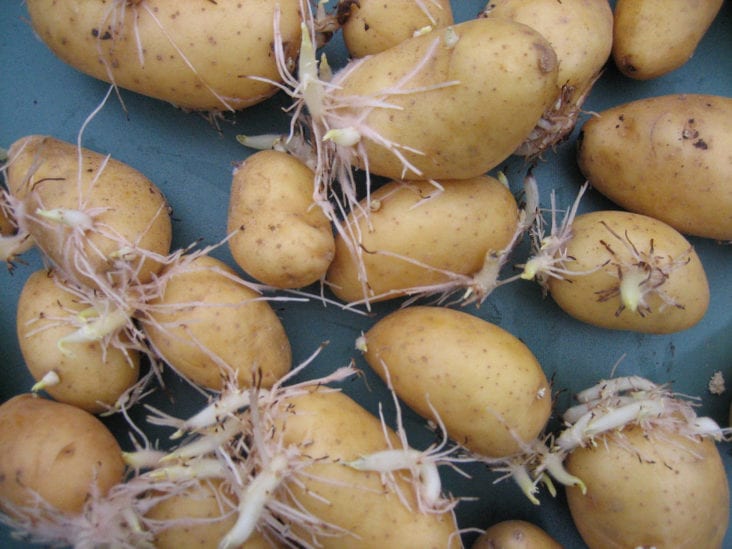 That is a dramatic change for a grower, VanOrden says. Farmers in his area are talking about the bedding method, but when you have $60,000 planters, the decision to convert to another method and be hampered by logistics and additional fuel costs can be daunting. He foresees growers not converting to beds completely, but using them in particular situations for particular results.

Still, VanOrden sees bed plantings as a viable alternative. He will continue to use it and try to gain efficiency through experience. That’s all that Taberna and Butt, who think the idea can be adapted throughout the West, can expect for now.

Taberna says that farmer resistance is a normal phenomenon that can be overcome as more tests and commercial fields prove that the method can be profitable. The same thing happened when center pivots came into the region in the 1970s, he points out, and now they are a desirable irrigation technology. The same thing could happen with potato bed planters and high plant populations, especially as water becomes more scarce.