Cities are known for their distinctive skylines, high-rise buildings and dense populations, not for production agriculture. Many of the United States’ largest cities lack acres of lush, fertile farmland. The land that is available rents or sells for premium prices. Rooftop farming

Read about: Keep Greenhouse Crops Cool in the Summer

Challenges aside, urban residents crave fresh produce and are willing to pay top dollar for locally grown, fresh fruit and vegetables. Energetic urban farmers are proving that production agriculture can work and even thrive in cities. To catch a glimpse of the crops they are growing, you often have to look skyward rather than scanning the horizon.

The rooftop farms are as diverse as the farmers who operate them. From small-scale growers like Allison Glovak and Charles Patterson of Uncommon Ground in Chicago, Illinois, who use their harvest directly in their restaurant, to farmers cultivating an acre of rooftop crops with intentions of selling the raw harvest to consumers, there is a niche to fit with a variety of farmer’s aspirations. The farm may rely on rooftop greenhouses or an open-air design. The plants may be grown in soil spread across the roof’s surface or placed in containers.

In Chicago, Glovak and Patterson have unearthed the secret to growing vegetables in small areas. The rooftop above their restaurant, which is in the historic Edgewater neighborhood, provides space for growing organic vegetables and herbs that are used in the kitchen six stories below. 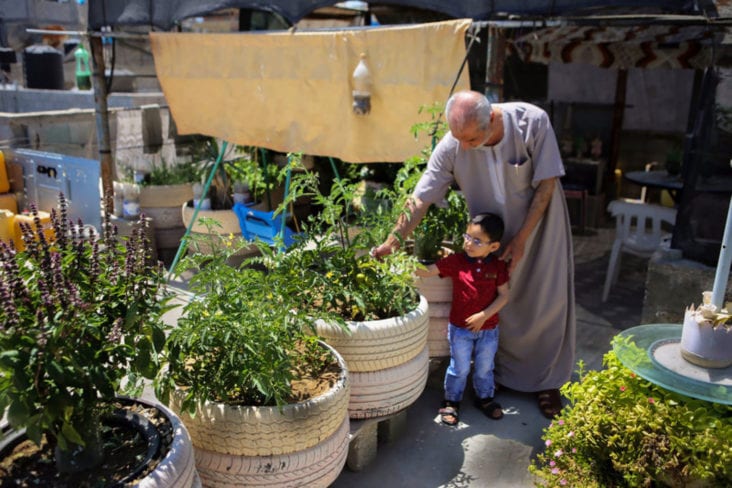 The rooftop offers 654 square feet of growing space. That area in combination with container gardens in the patio and parking areas brings their growing area to nearly 1,100 square feet. Every inch of space is put to work. The farm grows more than 50 different crops and 100 different varieties. Glovak and Patterson keep a close eye on yields and return on investment.

“We keep very detailed records to determine which crops have the most value in our system,” she said. “We’ve found that our most cost effective crops are micro greens and certified organic herbs.”

Despite the farm’s small scale, it produced more than 1,600 pounds of produce last year, mostly on the roof.

Nearly 800 miles to the east of Chicago, farmers at the Brooklyn Grange are known as the pioneers in rooftop farming amid Manhattan’s towering skyscrapers. In spring 2010, Ben Flanner, his business partners, family and friends emerged from subway tunnels beneath New York City and joined together to install the city’s first urban farm.

It took a little more than one week to hoist 360 soil sacks weighing 3,000 pounds each to the top of the six-story building and spread the soil on the roof of a building on Northern Boulevard in Long Island City, Queens, New York. Soil sacks were negotiated around obstacles like elevator bulkheads and water towers before being spread and prepped for crops.

This rooftop equates to 1 acre that produces approximately 50,000 pounds of vegetables each year. Flanner and his business partners are acutely aware of the costs associated with farming. Knowing they have bills to pay, they calculate selling prices based on square footage to create a cost for the vegetables they sell.

It’s almost easier to list the crops the farm doesn’t grow rather than detailing the crops it does. Broccoli, cauliflower and cabbage haven’t done well, perhaps in part because they are deep root-feeding plants and the soil on a roof is shallower than a traditional farm.

In May 2012, the Brooklyn Grange added a second 1.5-acre rooftop at the Brooklyn Navy Yard to its production. Unlike the original site, the soil for this farm had to be installed by a third-party contractor, and instead of being hoisted by crane, the soil was pumped up through a hose and sprayed onto the rooftop.

The Brooklyn Grange’s mission is to create a fiscally sustainable model for urban agriculture and to produce healthy, delicious vegetables for the local community while doing the ecosystem a few favors. In the farm’s six-year history, nearly 500,000 pounds of vegetables have been sold to restaurants, community-supported agriculture members and directly to the public via weekly farm stands.

Green roof systems first emerged in Germany nearly 30 years ago as a method for controlling stormwater runoff. Plants installed on rooftop gardens were hardy perennials that were more functional than beautiful. Over time, rooftop plantings evolved to a status symbol among the wealthy who hired landscape contractors to create lush flowering gardens on rooftop terraces as a private retreat from the city and as a place for entertaining guests.

“The biggest benefit of turning a roof into a green space is that it can be enjoyed by many people,” Glovak said.

In recent years, farmers, architects, engineers and policy makers have realized rooftop vegetation has social, environmental and financial benefits. Typically, roofing materials are black. Black absorbs the heat from the sun’s daytime rays and then radiates the heat off the surface at night.

“I especially love that this nontraditional form of farming for making fresh, organic produce is available to city residents while utilizing all available spaces,” Patterson said.

In general, rooftop farms use many of the same management practices as traditional farms. For example, winter kill cover crops can be used on rooftop planting areas to preserve the soil during winter winds and to return nutrients to the soil.

Disease, weeds and pests can challenge rooftop farmers, just as they do those farmers rooted to the ground. “Like any farm, diseases are more prevalent if we don’t properly rotate our crops. Because our space is so limited, proper rotation can be a challenge so we must watch carefully for any issues in our beds,” Glovak said.

Insect pests exist in a rooftop system as they do in a traditional setup, but Glovak finds that biodiversity among the plants manages the pests well. “When we get an infestation of a pest, the beneficial insects show up almost immediately,” she said.

Rooftop farming does have advantages. There are remarkably fewer critters than found on traditional farms. Deer, rabbits, raccoons and similar animals don’t have access to rooftop fields. A few squirrels are brave enough to venture to the rooftop to feast on the crops. “Birds tend to be our biggest pest, especially on our seedlings in early spring,” Glovak said.

While there are more similarities between the two farming methods than not, rooftop farms do have unique challenges. Climatic extremes impact production. High winds can be problematic. “Wind is a big factor as it tends to dwarf our plants, keeping them more compact,” Glovak said.

Installing wind breaks can help. “We strategically placed windbreaks on the roof and it made it much more comfortable when working on the roof and the plants benefitted, too,” Shores said.

Since the buildings hover above trees, which provide natural shading, rooftop gardens often receive too much sunlight and dry out quickly. “Drip irrigation can help overcome this issue,” Shores said.

Conversely, new development can unexpectedly create too much shade. “In downtown Chicago there are new skyscrapers to the south of where we created a rooftop farm on a three-story building a few years ago,” Shores said. “Those new buildings affect the lighting and will limit the crops we will be able to grow there.”

Soil fertility can also be difficult to manage. Without subsoil, like that found in the dirt on the ground, the growing medium may not have enough minerals and nutrients available for plants.

Any successful farm requires planning, especially when establishing crops in new fields. Before planting the first crop in a rooftop “field,” extra planning is needed. First, the structure of the building has to be evaluated. “The weight of our dry soil alone is 6 tons. We had to dig out our basement to reinforce the load baring walls, replace all our wood support beams with steel and reinforce our parapets,” Glovak said.

After the structural supports were reinforced, she and Patterson installed a floating deck that is supported by the structure of the building itself. “It was a massive undertaking,” she said.

Accessibility and convenience are key considerations. “I would love to install a farm on the roof where I live, but there is no good access for bringing in materials or moving the harvest off the roof,” Shores said.

Rooftops are often wasted spaces in cities that can contribute to environmental problems like climate change and stormwater issues. By turning a rooftop into productive growing space, farmers are helping to combat these issues while providing fresh food.

“The weather conditions may be a little more extreme on a rooftop, but if you have basic horticulture skills, rooftop production is possible,” Shores said.

Regardless of a rooftop farmer’s intent to sell fresh produce via CSA shares, farm stands, direct to chefs or through a wholesale outlet, the systems benefit the surrounding community.

“Everything we grow on our rooftop goes directly to the kitchen and ends up on our guest’s plate, no middle man and no carbon footprint,” Glovak said. “Besides, how many restaurants can serve a tomato on your plate that is so fresh it is still warm from the sun?”