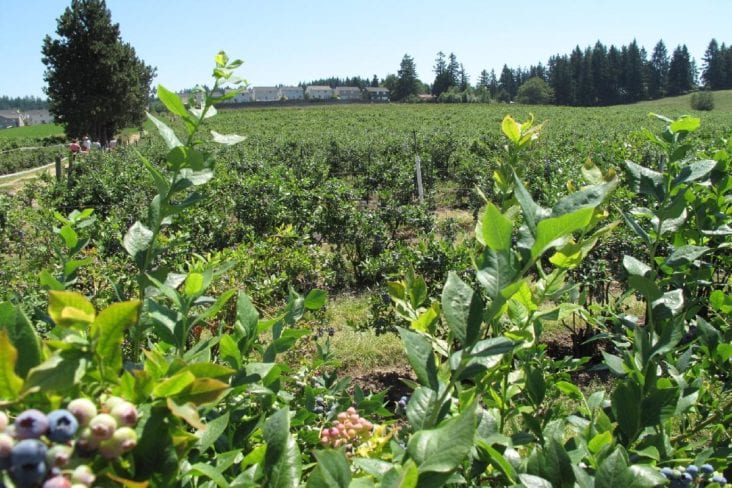 On a mountainside in Downeast Maine, Gail VanWart and her husband turned their 150-year-old wild blueberry farm into a native pollinator sanctuary. The move, a creative attempt to save the blueberry crop, was a response to several years of intense springtime rainfall that was preventing imported honeybees from pollinating the plants. In Hammonton, New Jersey, Bobby Galletta, of Atlantic Blueberry Company installed a network of drainage to handle floods, plus overhead drip irrigation for the dry seasons. In other parts of the country, fruit growers have attempted to prevent cracking or spotting from too much moisture by using helicopters over their fields to dry fruit. Water Challenges

Read about: Insects in Sweet Corn

Meanwhile, vegetable growers like Jim Crawford of Hustontown, Pennsylvania, adapted to extreme wet weather by amending soil, shaping beds in fall and winter and protecting beds with black plastic mulch so they can plant on time in spring, no matter the weather.

Dwindling water supplies in Center, Colorado, motivated potato grower Brendon Rockey to experiment with cover crops to reduce water use. The new, more diverse cropping system maintained yields and crop quality while using 50 percent less water and reducing the need for fertilizers and pesticides. Improved soil quality was an unexpected side benefit for Rockey’s potato crop. Promoting soil health is the key mitigation strategy in place for drought and flooding at The Farm School, a working farm and educational facility in Athol, Massachusetts. 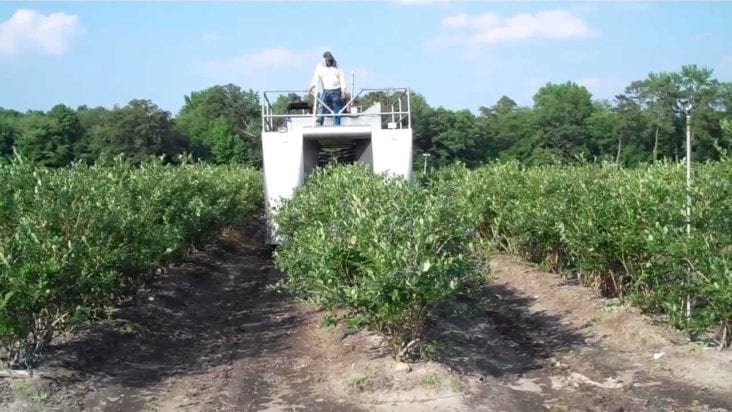 To offset increased precipitation in Iowa, producers have been installing subsurface drainage to remove water from the fields, at a cost of $500 per acre. In central California’s Pajaro Valley, farmers produce nearly $1 billion in fruit, vegetables and flowers on approximately 28,000 irrigated acres each year. A long-term, community-led effort to address irrigation issues associated with groundwater overdraft and seawater intrusion in the region led to increased use of recycled water for agriculture, capturing storm flows for later use, and water conservation efforts to reduce demand.

Strategies for adapting to climate change can sometimes be costly, but will be necessary if weather extremes and sea-level rise increase as projected. That sea-level rise will affect coastal farmers worldwide is obvious. “As saltwater continues to intrude into aquifers that are being used by agriculture, there is a threat that many more farm fields will have to be abandoned due to lack of freshwater for irrigation,” said Chris Obropta, Rutgers University’s Extension Specialist for Water Resources. Coastal flooding will reduce available farmland in Florida, a major vegetable production state.

According to Laura Lengnick, a climate resilience planning consultant and author of “Resilient Agriculture,” the availability of water has been identified as one of the most critical natural resource challenges facing U.S. agriculture in this century. Agriculture uses 80 percent of our nation’s freshwater, and 90 percent of freshwater in the western states. Some agricultural practices have contributed to degradation of water quality and reduced the quantity of freshwater supplies. “Climate change will create additional challenges to water resources, because higher temperatures and drought will increase water demand, while more variable precipitation and heavy rainfall will increase soil erosion and runoff and reduce groundwater recharge,” Lengnick said.

In California, where more than 50 percent of our nation’s fruits and vegetables are grown, water shortages were expected to idle over 500,000 acres of farmland in 2015, at an approximate cost of $1.84 billion plus a loss of over 10,000 seasonal agricultural jobs. Despite 2016 springtime rainfalls in the state, California remains in a drought as of this writing. If drought continues through 2017, net water shortage will reach around 2.9 million acre-feet per year, groundwater elevations will continue to decline, as will the ability to tap groundwater for irrigation (or any other use).

Decades of overuse of groundwater in central California’s Pajaro Valley has caused the migration of seawater into the freshwater aquifers, leading to soil degradation and decline in crop quality. Brian Lockwood, of the Pajaro Valley Water Management Agency (PVWMA), reported that increased groundwater salinity rendered the region’s strawberries less productive on a per-acre basis compared with strawberries grown with higher quality water.

“Every crop has a certain tolerance for salinity,” said University of California-Davis professor and hydrologist Helen Dahlke. “As salinity levels increase in the groundwater or irrigation water there is an increased risk for crop damage, with reduced crop quality and yield.”

As part of his mission to educate farmworkers, farmers and legislators about water, Samuel Sandoval-Solis, assistant professor in UC-Davis’ Department of Land, Air and Water Resources, shares information about irrigation solutions that work in climatic shifts. “It’s a mosaic of different policies, from improving storage through modifying reservoir operations, to modifying conveyance of water, improving aquifer recharge and storage [and] water conservation,” he said. The policies and solutions often work together, and none is effective enough as a stand-alone solution. As Solis added, “The silver bullets are gone.”

Described by Solis as “water insurance,” aquifer recharge is a natural process that occurs when precipitation or melt occurs regularly and in sufficient quantities to raise the level of the water table. Aquifer recharge can also be replicated artificially, by diverting water and putting it into the ground at targeted insertion points. Solis said the practice benefits all the farmers that withdraw water from that specific aquifer. “Water will move faster or slower depending on the aquifer, but the aquifer is connected, so ultimately everyone will benefit.”

In central California’s Pajaro Valley, where reduced groundwater pumping created the most significant reduction of seawater intrusion in recent years, PVWMA adopted a strategy to develop new, reliable sources of water for agricultural irrigation in lieu of groundwater production. Sources included the Water Recycling Facility, the Managed Aquifer Recharge and Recovery Facility, and a Coastal Distribution pipeline designed to convey water from these facilities to over 7,000 acres of farmland located in the middle of the seawater intrusion zone.

PVWMA has been working with growers to help improve irrigation efficiency, or, as Brian Lockwood said, “working to make every drop count.” As part of that effort, PVWMA offers a rebate for enhanced recharge.

Working with upstream neighbors to recharge groundwater aquifers during wet years is a strategy also recommended by Dahlke. It allows more groundwater to be available during drought years when surface water supplies are limited.

Reducing water demand is a simple but challenging concept to implement. It involves identifying crops that require irrigation and steering resources toward such crops while also identifying crops that do not require irrigation and diverting resources from those crops. As reported in Southwest Farm News, Texas A&M University researchers are responding to decreasing water levels in the Ogallala aquifer by exploring the viability and infrastructure required to switch from high-water-use crops like peanuts, potatoes and corn to vegetables like tomatoes that require less water.

One of the three most important actions all produce growers can take to prepare for drought, according to Obropta, is to convert to smart water conservation irrigation systems. “Drip irrigation will be much better than other systems that use more water,” he said. Selecting the right growing location, outside of floodplain areas, is another adaptive strategy Obropta suggested.

Idaho receives only 12 inches of rainfall each year, so Idaho’s USDA-NRCS pays landowners for property easements, puts unproductive agricultural land into a reserve program and stores water on that land. “It becomes a collection basin,” Idaho State Conservationist Curtis Elke said. “…basically for water, wildlife habitat and migratory birds. It also serves as a recharge for the state’s aquifers and reservoirs and other things, so it’s [a] multipurpose benefit.”

As UC-Davis professor emeritus Richard Howitt and his colleagues reported in “Economic Analysis of the 2015 Drought for California Agriculture,” new groundwater regulations designed to force groundwater basins toward sustainable yields in California may initially cause increased fallowing or longer crop rotations, but will preserve California’s ability to support more profitable, permanent vegetable crops through drought.

Whether you choose high- or low-tech infrastructure improvements, understanding water resources is beneficial. In New Jersey, Galletta has experienced drought and flooding. To date, he is getting by with the on-farm water supply produced by natural and shallow wells. In Maine, the VanWarts have an irrigation pond, but remain unconcerned about flooding, due to their high altitude.

At the Farm School, Tyson Neukirch and his colleagues are considering whether to use the topography of their landscape to help move and hold water on the site. “In the immediate area surrounding the farm, residential wells are often over 400 feet deep and produce a very low flow rate,” said Neukirch, a staff member at The Farm School. “This makes drilling wells for irrigation an economically dicey proposition and increases the potential viability of directing and holding surface and subsurface moisture in ponds and swales to increase the resilience of our landscape. Such water retention strategies coupled with irrigation infrastructure that maximizes the utilization of drip irrigation, continued investment in increasing soil organic matter and whole farm eco-system resilience are our greatest strategies for mitigating drought, flooding and groundwater salinization.”

PVWMA built a supplemental water supply pipeline to provide recycled water (tertiary treated, disinfected wastewater) for irrigation as an alternative to groundwater pumping. “With the completion of the Coastal Distribution System, we’ve been able to provide a supplemental supply of water in lieu of groundwater production,” Lockwood said. “The delivered water quality is better than the quality of wells suffering from seawater intrusion, and the delivered water has the added benefit of reducing groundwater production in an overdrafted basin.”

If you’re farming traditionally, your soil health may actually be your most important infrastructure investment. A 1 percent increase in soil organic matter in the top 6 inches of soil in an acre of land can result in as much 25,000 additional gallons of available water to crops. Higher organic matter produces better infiltration capacities, conveys water faster through the soil profile, and reduces waterlogged, anaerobic conditions in the soil.

As leafy greens grow, they release humidity. The industrial atmospheric water generator harnesses, condenses and pressurizes the water vapor, then purifies it using a multifilter process along with ultraviolet light and ozone exposure. The system produces approximately 100 gallons of water daily and distributes it to the plants through the high-density vertical growing system watering station. This technology uses 90 percent less water than traditional farming and produces similar yields.

Is indoor high-density vertical growing a doomsday scenario, or a viable alternative for growers? Horton believes it could be a solution. “If the state came to me and said, ‘I’ve got a farmer; he knows how to farm. Would you be interested in building a facility on his land?’ The answer would be absolutely,” he said.

Read more: Drainage For Your Fields