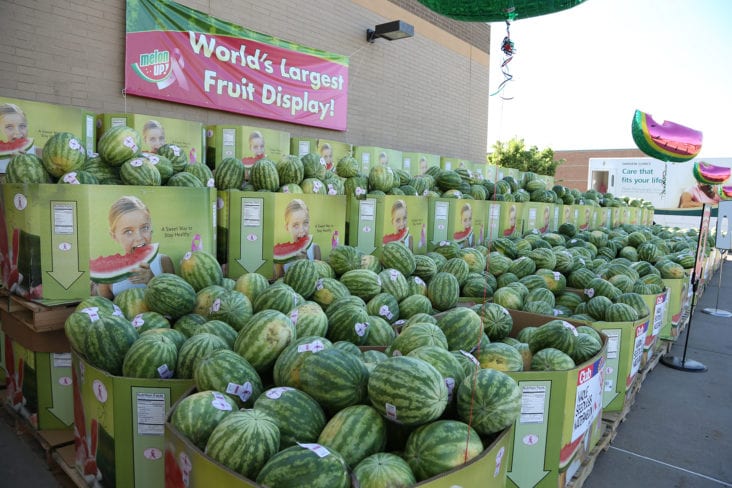 On a farm that focuses on quality produce, transparent production, food safety and commitment to its buyers, Brent Jackson may have begun the final step to those ends. Last year, he instituted an on-farm produce tracking and record-keeping system that will help the farm meet the needs of the future, which will demand that farmers be able to track their produce from the consumer’s refrigerator to the farm field where it originated.

Jackson, president of Jackson Farming Co. in Autryville, N.C., says that the tracking system for his melons and other crops is a fairly simple but effective one that is still a work in progress. He views it as a necessary improvement—and a fairly big expense—that gives his farm credibility, as well as the ability to trace any food safety problems that may arise on his farm, or prove that the problem didn’t arise there.

The farm grows watermelons, cantaloupes, specialty melons, strawberries and commodity crops such as cotton and tobacco on 5,000 acres near Fayetteville and on 200 acres in Florida. It also brokers other growers’ melon crops and markets produce up and down the East Coast, from Florida to Canada. Their two biggest produce items are watermelons and cantaloupes, which are harvested from May to September.

“We buy from other growers as well, in order to fill in when we don’t have enough produce. It’s called cash flow,” says Jackson, who with his wife Debbie started the farm in 1979. It became Jackson Farming Co. in 1981. For a man who didn’t grow up on a farm, he has done quite well with this large and well-organized enterprise. His son Rodney now works for the farm as the head of growing operations, and his wife is still involved in accounting. The farm harvests, packs and stores all of its own produce, with over 60,000 square feet of storage space under cover. About 13,000 square feet of that is in refrigeration, which means that the farm can cool 27 semi loads of produce at one time. The farm employs up to 25 full-time employees and hires about 170 workers during the harvest season. 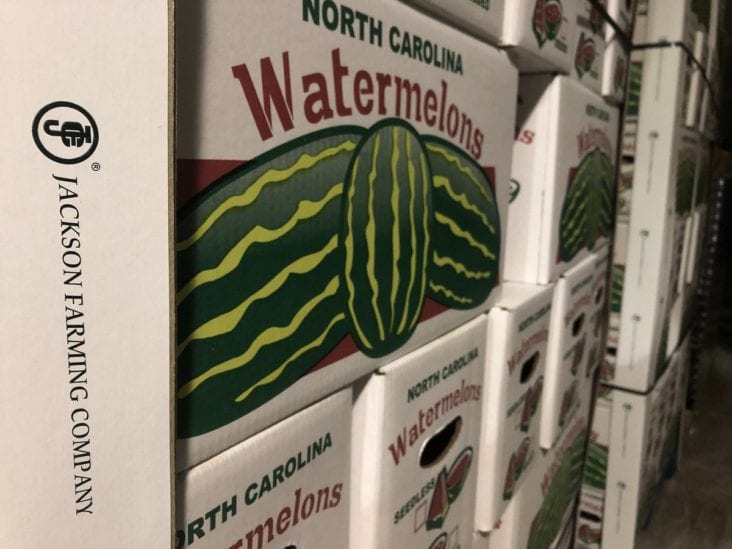 In addition, the farm has an extensive quality control system and owns a small fleet of trucks for produce shipping. Jackson notes that the general idea is to be as vertically integrated as possible. That can lead to cost advantages, but just as important is the fact that the company likes to be able to control its produce, as much as possible, all the way to the consumer. The tracking system is one link in that effort toward ensuring quality and control.

“We believe that’s part of the process. You get repeat business that way.” Jackson says the tracking system had been planned for several years and was finally installed in 2009. It basically consists of placing industry-standard stickers on fruit and labels on bins that will enable the company to keep good records. Those records not only assist the operation’s accounting and inventory system, it also allows him to trace the produce back to the pertinent field in case of a food recall.

Here’s how it works. In the case of a single cantaloupe, say, the produce is harvested and placed in the farm’s packing line. There, the cantaloupe is automatically given a sticker that has a data bar code, which includes a GS1 prefix and a GTIN (Global Trace Item Number) the farm obtained from the appropriate industry nonprofit agencies. That traces the produce to the farm. Each cantaloupe is then placed in a shipping bin.

The farm’s internal computer then produces a lot number for the bin of cantaloupes and prints a label that is placed on each bin. The system allows traceback to the case or bin level, but not to the item level, which Jackson considers unnecessary since with this system he would be able to find the field the piece of fruit came from. The system is used for his other produce as well, such as a flat of strawberries. The sticker is also referred to as a PTI, or Produce Traceability Initiative, label, which refers to the U.S. government program designed to eventually ensure accurate tracking of all produce in the nation.

One deficiency in his system, Jackson says, is that currently the lot numbers are then handwritten into a book that connects them to the fields where they were harvested. He would rather this were also computerized, but that requires an extra, and expensive, step. This system is good enough for a start because it does the job he wants it to do. He does keep a backup book for the field information in case something happens to the original.

Jackson Farming Co. uses a computer that can be networked to the other company computers and used for other purposes, but the printer is dedicated to that one job. Jackson hired a North Carolina company, FoodLogiQ, to design its tracking program, because the entire process, with all the software involved, is complicated. The end result is simple: an ability to respond quickly and accurately to any food safety issue.

“We could shut down one part of one field and prove if it was our product or not our product,” Jackson says. He points out that this crucial bit of information could be instrumental in either pinpointing the food safety problem, or in proving that his farm was not responsible for the problem. In addition, it is a boon to the industry for such information to be processed quickly in order to avoid the weeks of lost harvest and shipping that can result from one food recall. Millions of dollars can be saved by all cantaloupe growers if a few unsafe cantaloupes can be traced back to the originating farm field quickly.

The farm keeps a record of its truckload sales and lot numbers, but FoodLogiQ also has a Web-based program where this information is stored. The company keeps a master database that he can access with a password and provides the expertise to advise the farm on any improvements in the system. Jackson says that there are more elaborate systems that, for example, can provide traceback to the item level.

The farm’s Famous accounting software is also tied into the tracking data, which provides good farm record-keeping and inventory information down to lot number, as well as produces invoices. The company has a separate software program that keeps track of the pesticides used on the farm. That, combined with a produce pesticide testing program conducted once a year by an independent certified laboratory, gives the farm feedback and transparency for its chemical usage. Combined with other food safety practices, it allows the farm to be certified for Good Agricultural Practices (GAP).

Jackson believes this all contributes to the production and shipping of quality produce, but it also gives the farm credibility and a kind of insurance policy. He says that it hasn’t resulted in any new sales so far, but that could change in the future as the nation’s produce industry becomes more and more automated and demanding of traceability data. He foresees that at some point this type of system will be mandated for everyone in the industry.

“We’re always trying to be proactive,” he says. He notes that his tracking system facilitates the brokerage side of the business in which he sells, ships and tracks produce for other farms. Three other growers are dedicated to him as a broker, and he also sells occasional lots for other farmers. His tracking system also benefits them.

Although Jackson doesn’t have an exact cost for his tracking system, he says it amounts to well over $10,000 so far. That includes the services of FoodLogiQ, the cost of a special printer and the purchases of hundreds of thousands of stickers that are attached to the produce. That is in addition to extra staff. He says the system has necessitated the hiring of an extra full-time shipping clerk, although that person also has other duties in the office. At this point, he has not been able to pass along that extra cost to his produce customers, but hopes that at some point this will be possible.

Jackson emphasizes that although this type of system is a hassle to install and implement, it is becoming an essential part of being a sizeable produce grower in America. It’s really all about a dedication to quality and a responsibility to the ultimate customer: the consumer.

“We’re trying to do what’s right for us and the customer. We’re in this for the long haul,” he says.