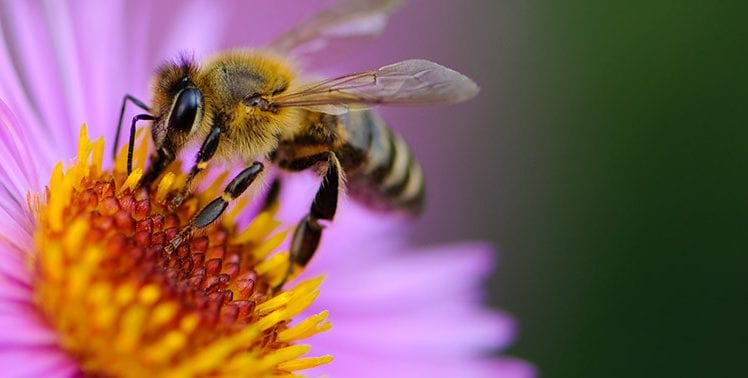 As honeybee colonies continue to sicken and collapse, what can growers do to ensure crops are pollinated? Can other bee species take the place of honeybees? Who is this workers-in-waiting, and what can they do for crops?

Other species of bees are not really “in waiting.” They have been here all along, well before honeybees in hives were carried to this country by European settlers some 400 years ago. Many of those imported bees promptly escaped domestication, formed swarms and set up nests in hollow trees, joining an estimated 4,000 bee species native to North America. Some 75 percent of the fruits, nuts, and vegetables grown here are pollinated by both native and imported bees.

While the nonnative honeybee became the most important commercial pollinator of U.S. crops, at least five native bee species are now managed for crop pollination, including the preferred bumblebee of commerce, the “impatient” bumblebee (Bombus impatiens). Other native species, such as Morrison’s bumblebee (Bombus morrisoni), are managed for greenhouse pollination of tomatoes, which require their form of buzz pollination. The honeybee is not capable of pollinating tomato or eggplant flowers, nor is it very effective at pollinating many native plants, such as cranberries, blueberries, cherries, and pumpkins.

Unfortunately, it is not just honeybees that are in decline. The same factors that may be reducing honeybee numbers – perhaps a combination of disease, nutrition, habitat fragmentation, stress, and pesticides – may also be affecting native bee species. For instance, a number of years ago, New Brunswick’s apparently healthy blueberry crop was nearly wiped out because pesticides used to control spruce budworm in nearby forests had the unintended effect of killing off native bee pollinators.

What is a bee?

Bees are thought to be descended from wasps, most of which are carnivorous. As flowering plants evolved, some wasps exchanged prey for nectar. Bees developed in many sizes, colors, and even shapes. Where bees live, whether alone or in colonies, and in which seasons and where they travel is as varied as they are.

Although it might at first glance seem a trivial distinction, bees are classified in one of two groups, according to the length of mouthpart segments (known as proboscides) within their tongues. Although they can collect nectar from open, flat flowers, long-tongued bees favor plants with deep flowers that have longer throats. Short-tongued bees are only able to collect nectar from shallow flowers, such as daisies or carrots. 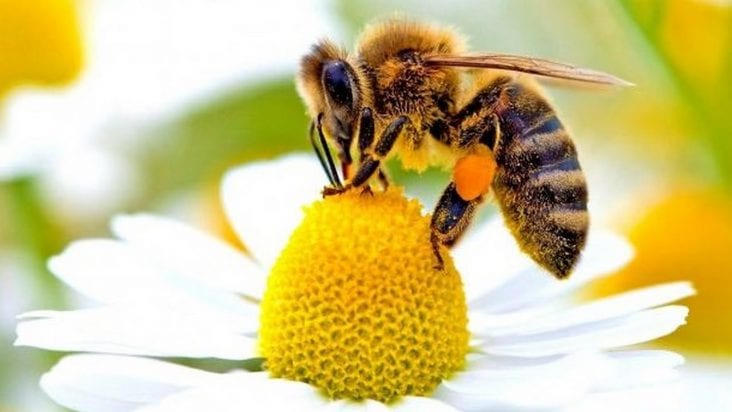 Among specialist pollinators are squash bees. They are efficient pollinators of cucurbits, including squash, pumpkin, and zucchini. Blueberry bees are also specialists. One species of bee, Anthemurgus passiflora, is so highly specialized that it is known to forage only on yellow passionflower.

Almost all bees build nests. The exceptions are some species, members of three bee families, that parasitize other bees. Like cowbirds and some cuckoo birds, cuckoo bees lay their eggs in their relatives’ nests.

Before laying their eggs, bees stock their nests with a mixture of pollen, nectar, and saliva. After stocking, they seal the nests so the larvae will be safe. To provide food for their young, bees mix dry pollen with some nectar. The saliva they add to these pollen loaves is thought to provide protection against bacterial and fungal infections.

Native bees may nest in holes in trees (usually left by beetles), hollow stems, holes in wood that they themselves make, or underground. Some native bees are more efficient pollinators than honeybees. Examples are mason bees on apples and bumblebees on beans. To help encourage these efficient native bee pollinators, growers should provide habitat among and around crops. Providing for native bees can be cost-effective: If sufficient high-quality native pollinator habitat is available around growing areas, it may not be necessary to rent honeybees.

In large greenhouses that grow tomatoes year-round, bumblebees are the preferred pollinators. Although bumblebees are generally free to leave the greenhouse, most stay. In their greenhouse habitat, bumblebees need only a queen, a box for the nest and a supply of sugar water. Sugar water is necessary because while tomatoes make abundant pollen, they produce no nectar. Bumblebees are important pollinators in the field too. Some clovers, a forage crop for cattle, are dependent on bumblebees for pollination.

Other useful native bees include squash bees. Several species of native squash bees (of the genera Peponapis and Xenoglossa) pollinate cucurbits. Squash bees look much like honeybees but can be distinguished by their behavior when they are near cucurbit flowers. Squash bees work quickly, whereas honeybees hover over flowers before approaching and then work slowly. Squash bees begin working before dawn when cucurbit flowers are opening; honeybees arrive later in the day when the flowers are past their prime. It is thought that squash bees do much more pollination than honeybees, even when they have competition from nearby hives of honeybees. Squash bee nests may not be immediately obvious; they nest underground, often beneath the very plants they pollinate.

The scope of research

Much research nationally and internationally has focused on the extent of native bee population decline and the degree of native bee responsibility for crop pollination. So far, research seems to indicate that the decline of pollinators worldwide is best addressed by widespread modification of human practices.

“The way humanity manages or mismanages its nature-based assets, including pollinators, will in part define our collective future in the 21st century. The fact is that of the 100 crop species that provide 90 percent of the world’s food, over 70 are pollinated by bees.”

In 2008, the U.N. funded a five-year worldwide program to encourage management practices to best maintain and protect pollinator species. The U.N.’s Global Environment Facility is assisting countries and regions with pollinator protection.

In Europe, project STEP (Status and Trends of European Pollinators) has undertaken a broad-scale survey (published in 15 languages) to discover whether and to what extent people are aware of the role of pollinators in agriculture. STEP has also published a fact sheet encouraging farmers to utilize the services of wild pollinators, available at http://www.step-project.net/img/uplf/STEP_fact sheet_ENG.pdf.

In the U.S., the Department of Agriculture (USDA) is sponsoring a number of research projects designed to assess the status of both honeybees and native pollinators and to evaluate and encourage native bees’ habitats.

On a local level, here are some steps growers can take to encourage native bee crop pollination: 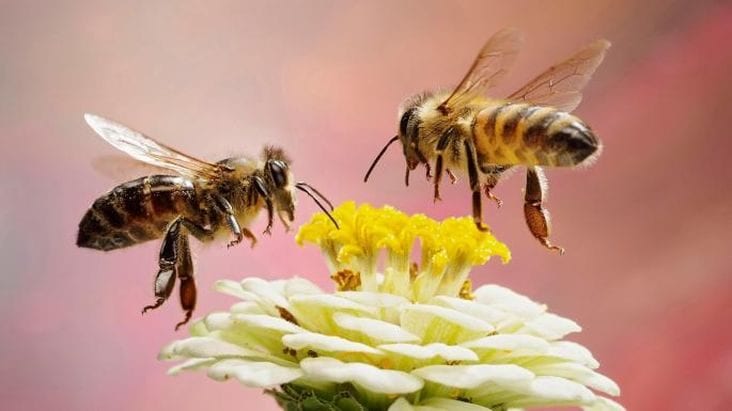 1. Identify the native bee pollinators in your area. Help increase their numbers by enhancing their habitat.

2. Near growing areas, include many flowers of a number of different varieties to provide pollen and nectar for native bees. The presence of food sources for native bees will help increase their numbers, while also increasing crop yields.

3. Protect and encourage sources of nectar near fencerows, hedgerows, riparian buffers and in any place, there is a variety of plants (including weeds). Good forage plants will be abuzz with insects in the morning and at midday. Native bees will visit many of the same flowering plants used by honeybees and bumblebees.

4. Be sure flowers are present throughout the growing season. Various species of native bees are active within different time periods from February to November. In warmer climates, this period is longer. To support a diverse population of native bee species, a succession of flowers is required. Fall-blooming flowers, such as asters and goldenrod, help some native bee species, as well as honeybees, go into hibernation with more energy reserves than they might otherwise have.

5. Improve food sources and nesting sites for crop-pollinating bees by leaving undisturbed buffers around fields where flowering plants can grow. Plant hedgerows to reduce wind velocity where flowering plants will be established. Plant shrubs and flowers that bloom at the same time as crops. In some locations, harvestable flowering trees, such as black cherry, black locust or maple, may be appropriate.

6. Utilize areas that are too wet or dry for crop production, as well as road edges, drainage ditches, and land around buildings, to cultivate forage for bees.

7. Grow plants native to your area as nectar and pollen sources. Native plants are generally well-adapted to local growing conditions and thrive with minimal attention. Where possible, include shrubs and trees that provide pollen and nectar for bees.

8. Consider the shapes, colors, and sizes, as well as bloom times, of flowers to attract the largest variety of crop pollinators. Avoid highly invasive plant species that will eventually dominate the habitat and thus reduce its diversity and value.

9. Minimize pesticide use. Insecticides are deadly to bees. Herbicides can remove many of the flowers bees need for food. If it’s necessary to treat noxious weeds, spot-treat them and avoid flowering plants.

If sufficient high-quality native pollinator habitat is available around growing areas, you may not need to rent honeybees. Do what you can to develop appropriate native bee habitat. The world and your bottom line will thank you.