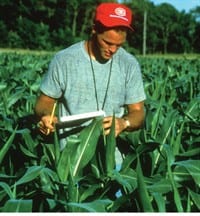 Imagine the poor person who goes fishing with a wormon his hook and lands a whale. Worse might be thekid working a farm pond who baits his hook withhalf a beefsteak. The moral of the story for corn growers issimple: know your crop, which pests you are trying to findand bait your trap accordingly.

Entomologists recommend sweet corn growers use one or two traps per field. It is always a good idea to follow the PestWatch postings. However, nothing beats having local information from a reliable trap.

“It goes on the edge of the field at the time of fresh silking,” he continues. Jasinski says this is the simplest, readily available trap for scouting corn ear worm in sweet corn.

Another trap that entomologists and IPM experts have found effective is the Hartstack trap. “The Hartstack trap is much more sensitive,” Jasinski says. “It picks up moths earlier and in greater numbers.”

The Hartstack trap is a robust unit made with a hardware cloth-style wire mesh. At a couple of hundred dollars each, they are expensive, and Jasinski notes that growers will most likely not find them at their local farm supply outlet or in the normal supply catalog.

According to research by entomologists at with the Ontario, Canada Ministry of Agriculture, Hartstack traps have been proven up to three times more effective than the traditionally used Heliothis trap.<0x202F>They recommend using one trap per location.<0x202F>Better, growers are encouraged to have two trapping locations spread out on the farm.

Not every grower needs to have a fleet of pest identification traps around the farm. “Go minimal,” Ohio State Entomologist Celeste Welty recommends. She says it is a good idea to have at least one trap on the farm.

Given the time and expense involved, the Heleothis trap might be the trap of choice for many sweet corn growers. University and ag department IPM experts have used the Heleothis trap in their work for years and found it effective.

Both the Heleothis and the Hartstack traps use the same pheromone.

“Sticky traps are a no,” emphasizes Jasinski, referring directly to corn ear worm monitoring. While the sticky trap is cheap, it does not lend itself to trapping critters like the corn ear worm.

If a sweet corn grower is going to monitor for only one insect, most pest control experts like Welty would recommend monitoring for corn ear worm. “If there is one pest you have to be really sure you are aware of, it’s corn earworm,” he says. In Ohio, it typically shows up in mid-August.

IPM experts in Ontario, north of Ohio, say growers should put traps out in the field by mid-July (earlier in south- western Ontario), then replace lures every two weeks.<0x202F>Jasinski notes that some traps require weekly replacement.

Growers must place their traps near freshly silking corn.<0x202F>The corn ear worm lays its eggs in the fresh silks. As the silks begin to dry down, growers should move their traps to new sites.<0x202F>

While corn ear worm is the main concern for most growers, there are other pests that are worth monitoring. While not yet an economic threat, growers might find Western Bean Cutworm in traps following flights in July in Minnesota.

On the other hand, European corn borer and the fall armyworm typically arrive after the first appearance of corn earworm. In years with heavy infestations, intense spray programs are recommended. In some years with lighter ear worm counts, the number of sprays can be reduced.

Most major catalogs sell traps. Gempler’s, for example, handles traps and pheromone lures from Trece, Salinas, Calif. Lures generally run from $2 to $2.25 in quantity. Remember, lures need to be replaced regularly through the season.

Heliothis traps run between $75 and $85 depending on the number purchased. Bucket traps, which are recommended for cutworms, are about a third the cost but are not recommended for corn ear worm or European corn borer.

Blacklight traps also can be used to monitor European corn borer and other moth pests. However, Welty says that, from a practical point of view, they are better suited to professionals or researchers.

Jasinski agrees. While blacklight traps are quite sensitive, and will catch a pile of corn ear worm moths, they will catch everything else. “You’ll catch pounds of material,” Jasinski says. And, he means that literally. A grower who empties the tray every couple of days had better have a good insect key handy. He is likely to find examples of every specimen that has been flying around the county. While it might be good for your daughter’s 4-H insect project, it hardly makes the job of zeroing in on one particular economically-significant pest easy or fun.

Growers who do opt for blacklight traps should be sure to order traps and not bug zappers.

Any of the pheromone-based traps, on the other hand, will probably have lured and captured better than 98 percent male corn ear worm moths, and that is what a grower wants to see.

The best place to place traps is just above the top of the crop canopy. Mounting the trap on a 6-foot fence post usually does the job. The number of traps to use will depend upon your objectives and ability to inspect them. Some experts say a single trap is sufficient, while others recommend two traps per field.

In any case, the experts say growers should inspect traps at least once per week, taking counts and recording pest numbers.

The telephone and Internet should be right there alongside the insect trap as tools of choice. Call neighboring growers and find out what they are observing. Look at extension Web sites and pesticide company Web sites and check what they are recording in an area.

“If you are getting a flight of insects in one part of the state, then probably everyone is seeing it across the area,” Welty says.

The Canadian IPM research would beg to disagree. Corn earworm trapping is most effective if done on an individual farm basis, the Ontario researchers say, noting that regionally-based trapping programs will not always capture localized populations.

In any case, IPM specialists recommend having at least one trap on each farm. One per field might be overkill unless you are really concerned about a situation.

Once they are trapped, identify the pest insects. Here’s where the 10X or 15X hand lens comes into play. Most growers know the common pests and there are publications available that can help with the identification task.

IPM experts maintain that actual plant inspection or scouting is more important than traps for most crops. Check plants in all areas of the field. Look underneath leaves near the top, middle and lower parts of plants. Keep records of the pests you find, the number of plants infested, and the severity of infestation.

Growers should look for more than insects. Crops should also be scouted for diseases, important since diseases can cause significant damage in a short period of time. Weather conditions, cultural practices, varieties and the use of pesticides will affect the timing of pests’ appearances.

Curt Harler is a freelance writer in Strongsville, Ohio.