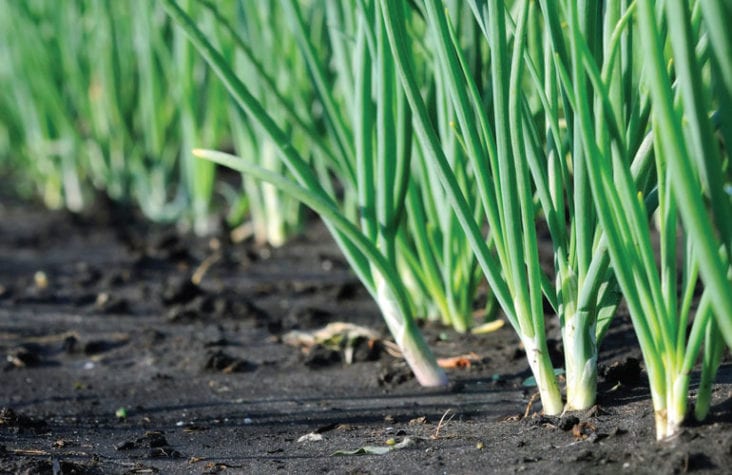 ARMING GROWERS WITH USEFUL INFORMATION ON MAGGOTS AND THRIPS

Onions may cause your eyes to water when peeling them, but most of you apparently don’t mind, if statistics are any indication. The average American eats nearly 18.8 pounds of fresh and storage-type onions every year, according to Vee’s Marketing, a Wisconsin produce brokerage that specializes in onions.

Fewer than 1,000 growers raise onions in the U.S., according to the produce brokerage, and they raise about 125,000 acres each year. Worldwide, growers plant more than 75 percent of their production in yellow onions.

These facts underscore the importance of onion production for growers in the U.S. and overseas. So that leads us to ask what can distract from a successful year of onion production? One distraction is insects, which apparently like onions as much as humans. Let’s examine two of the more destructive insects – maggots and thrips.

Adult maggots are simply long-legged flies, according to Shelby Fleischer, an entomologist at Penn State University. The white-colored insects stretch to 1/3-inch long once they mature. These maggots overwinter as pupae. Then, adult flies emerge once springtime arrives. That is when they start to lay eggs in the soil next to the onions. The eggs hatch in about three to four days. Almost immediately, maggots bore into the onion plants and start feeding. According to Fleischer, depending on the weather conditions, three to four generations of these insects may occur within a year. 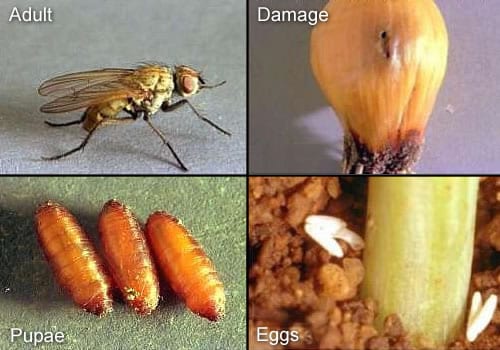 Maggots prefer cool and wet weather, and their complete growth cycle occurs within 45 to 65 days, according to James Dill, a pest management specialist at the University of Maine.

Fleischer confirmed that onion maggots give growers the biggest concern before and after a wet period in the springtime. They especially like young onions and cause onion plants to wilt and sometimes die.

Wilting and stunting are the first signs that onion growers may be facing maggot problems, Dill said, and during this time growers may spot these insects in onion plants that are decomposing.

Older onion plants, on the other hand, may weather maggot infestation, Fleischer said. However, the bulbs that maggots attack may rot in the field or in storage.

Dill said that maggot damage certainly may cause plants to rot, but noted that while larger bulbs can withstand serious injury, they may not be worth keeping. White onion varieties are more prone to attack, and once maggots infest a field, they likely will return again the following year.

For smaller growers, Dill strongly advises they control wild onions. These volunteer onions are a surefire source of infestation. He suggests removing them but avoid plowing any into the soil. In addition, floating row covers may guard against the adult fly.

Adult onion thrips are slender, only 1/25 inch in length, and have a yellow to brown appearance, according to Fleischer. He adds that thrips can overwinter on plants, field debris, fence rows and weed-infested areas.

Thrip destruction occurs when they puncture the outer surface of leaves, Fleischer noted. The puncturing is done by their mouthparts, which feed on leaf sap and tissue. To identify thrip injury, growers may spot white blotches on the leaves. 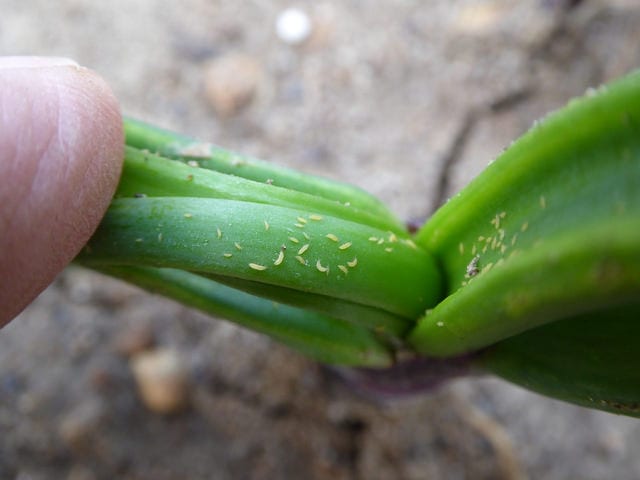 According to a fact sheet on onion production from Extension entomologists Alton Sparks and David Riley – both entomologists at the University of Georgia – any leaves damaged by thrips are more prone to disease infection because they serve as vectors of viral diseases. Additionally, they may transmit other onion diseases. The fact sheet advises growers to scout their fields closely and look for thrips in leaf folds and in the plant’s neck, because they are attracted to these close spaces.

These insects can produce several generations, Fleischer noted, and they prefer hot and dry weather, which is when a large part of plant injury occurs.

Fleischer said that red onions are more prone to thrips damage than white onions. However, he noted that all varieties can tolerate populations of 25 thrips per plant. If the plants are well irrigated and managed, they can withstand higher populations without affecting yield. When populations reach more than 50 per plant, thrips damage may cause a reduction in onion bulb size. Fleischer recommends a proactive stance rather than a reactive stance when dealing with thrips. Waiting until growers see damage may be too late.

For control of thrips, Fleischer advises keeping the plant as vigorous as possible. A healthy plant may help fend off insect injury. While growers will gain some control with insecticidal soaps, it may be best to apply an insecticide that is labeled in their state for onions. He warns to carefully read the days-to-harvest interval to avoid excessive residue in the onions. Unfortunately, he said that insecticide resistance has been an issue for onion growers.

That resistance affects thrips species differently, according to the University of Georgia fact sheet. This resistance occurs most often when growers over-apply insecticides or use ineffective ones. The fact sheet advises growers to spray only when thrips populations exceed the threshold and only when they identify the species present.

Additionally, insecticide control is hard, since thrips like to feed between leaves.

For effective and widespread coverage, Fleischer recommends applying insecticides with a sufficient amount of water. He also advises to follow label directions.

The University of Georgia fact sheet stresses that it’s a good idea to apply insecticides when thrips reach an average of five per plant. But it states that growers may be able to spray less. For instance, effective spraying when a single thrip per plant is seen may reduce further populations and cut down on additional sprays.