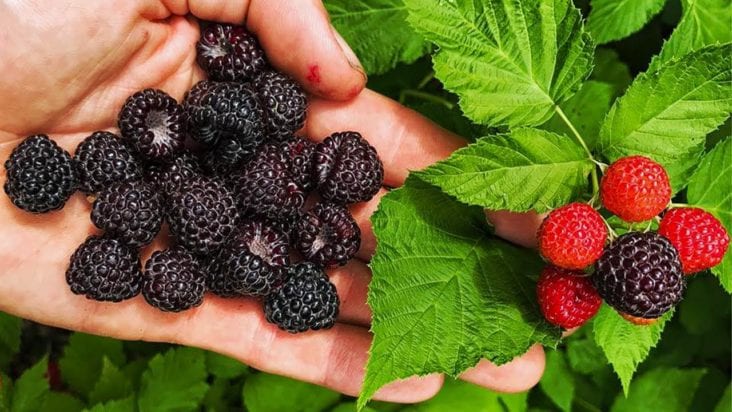 Black Raspberries are one of those ultra-healthy fruits that we should eat more than we do. Valuable studies by Gary Stoner and his colleagues from the Comprehensive Cancer Center at Ohio State University, researchers at The American Cancer Society, and the late James Joseph and his colleagues at the USDA Human Nutrition Center on Aging at Tufts University. The news from the research is exciting for berry growers. This powerful biological weapon is great for health, as the mix of plant compounds is believed to help human cancers including esophageal, breast and colon cancers.

The even better news is that you can grow and market this amazing plant. Scientists have been studying the health benefits of vegetables and fruits for years. They continue to work and gain the understanding of particular antioxidant compounds which may have cancer-preventing properties. In this research, all berries fare very well.

The scientists of USDA recommend that people consume between 3,000 and 5,000 oxygen radical absorbance capacity (ORAC) units daily, in order to maintain optimal antioxidant protection of the tissues and plasma in the body. To meet these beneficial recommendations, nutritional powerhouses like dark-colored berries are necessary. A cup of berries each day provides 3,000+ ORAC units. Black raspberries and blackberries are very rich in antioxidant activity and should be a part of your diet.

Previously, scientists studied strawberries and blueberries expecting them to have chemo-preventative properties. After some tests, it was proved that black raspberries contain 11% higher levels of antioxidants than blueberries, as well as 40% more than strawberries.

These chemopreventive compounds are called blocking agents, and they may help to slow the beginning stage of cancers. As suppressing agents, they may help to arrest or even reverse the progression. Other berries contain their own mixes of important antioxidants. All colors are good, and should be alternated to get the best out of all of them.

One of the reasons that black raspberries are a stellar health advantage is the rich amount compounds like anthocyanins that give berries their almost pigment. Phenols, like ellagic, courmaric and ferulic acid, calcium, vitamins A, C, E, and folic acid are other beneficial nutrients. In some clinical studies involving rodents at Ohio State University, cancer-causing agents were injected. They developed colon tumors, after which those who ate black raspberries showed 80% fewer malignant tumors when compared to the rats whose diets lacked black raspberries. The Jewel black raspberry was used in this research.

These types of research show how beneficial they can be, and that we should eat them year-round. Cancer researchers at OSU recommend black raspberries as one of five or more servings of fruit and vegetables a day. Medical and nutritional experts estimate that over two-thirds of human cancer is preventable through simple and appropriate lifestyle changes.

Growers have a big opportunity to help clients by including black raspberries in the berry plantations. As berry evangelists, growers are responsible of helping people make good lifestyle decisions by providing berries and making them widely accessible and available. Growers should harvest an early summer crop, before high populations of insect pests like the spotted wing drosophila, and the brown marmorated stink bug. The early summer-ripening crop of berries will beat the pests to the ultra-healthy berries and help many, including the growers themselves.

How to Grow Them

One 3-feet-apart in-row spacing, with rows 9 feet apart requires 1,613 plants per acre. Horizontal wire trellis achieve the highest yields of two or more pints per plant. Put two to three horizontal wires on each side of each row, alongside drip irrigation.

You have to removing the tips of first year plants several times during summer in order to produce multiple lateral fruiting canes for high yields. Also, keep the plant height down to around 4 feet.

The plants will bear fruit on canes that are 2 years old. After harvest, remove the bearing canes. Prune the spent canes either in the late summer, or at dormant season. By doing this, you will only leave the first-year canes to bear fruit next year.

Black raspberries have only a minor and insignificant acreage in the eastern USA. They are widely grown in the Pacific Northwest. In the Mid-Atlantic and Mid-South, the black raspberry is very sought after. It is only found in the wild most of the time. They are amazingly fragile when picked fresh, and not at all suited for shipping. Local market sales are a whole different story.

The scarcity is maybe due to the older times when Anthracnose was difficult to control. There was also the lack of virus-free, tissue-culture nursery-grown planting stock. Only around 2 to 3 years of good production was possible, before the plants declined and failed. At the turn of the century, Anthracnose and other raspberry diseases became easier to control by using late winter, after-pruning spray of lime-sulfur. Late spring disease-preventive sprays came as well. In the recent years, the market has been flourishing, and the time is now to start growing and consuming black raspberries.