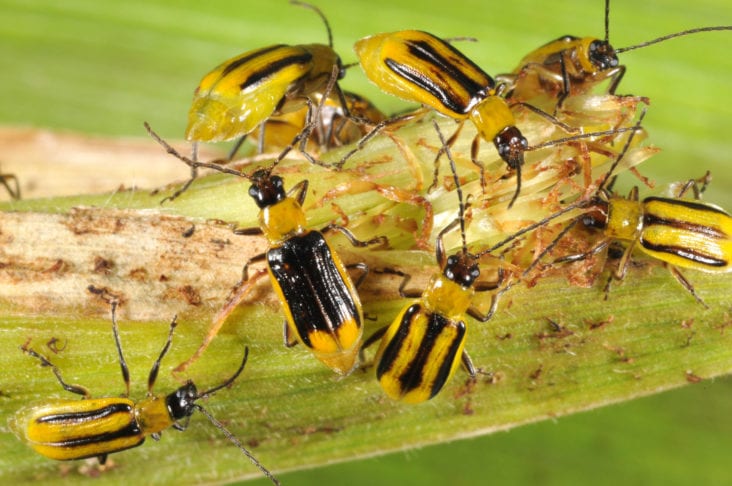 Like humans, insects love to feed on corn. As a result, if consumers want to continue enjoying this sweet treat, they must rely on growers to identify and control insects that favor corn. Three insects that like to feed on this vegetable are the corn rootworm, cutworm and European corn borer. Let’s look more closely at them here. – 3 Corn Insects

Beetles of the corn rootworm start appearing in fields in the state during July to August, according to entomologists at Penn State University. Their presence continues until fall. Entomologists recommend that growers scout fields in early July when corn rootworms start showing up.

After emerging, beetles deposit eggs in the soil near the base of the corn stalk, Penn State entomologists indicate. Those eggs stay until spring when larvae start to hatch. Growers are warned to closely monitor larvae and control with insecticides if necessary because corn rootworm larvae can cause much destruction.

In their years of research in various test plots, these entomologists insist that soil applications of insecticides applied at planting have failed to increase corn yields to any great extent, although a few field sites show promise. They advise to keep insecticide sprays to the field for the best agronomic advantage and away from outlining areas. While inspecting plants in fields, if growers notice root damage, corn rootworm may be present. As August arrives, entomologists suggest checking corn ear tips for beetle infestation.

Penn State entomologists believe cutworms are the most difficult insects to control when it comes to corn, probably because they overwinter as pupae and adults in the soil. They indicate that adult cutworms make their way up north from the south, and by April and May adults deposit their eggs just before corn is planted. Cutworms like debris or weedy fields. They go from egg to adult in about two months. Once larvae hatch, they begin feeding on weeds; when corn seedlings emerge they move there.

If cutworm numbers increase significantly, growers will easily spot them when they start to cut plants off. By that time, they are about one-half to two-thirds grown. Penn State entomologists point out that larvae feeding can result in cutoff above the ground if the soil is moist; however, if conditions are dry they may remain underground and damage or cut off the plant. If just damage occurs, growers will notice the corn plant has wilted. When growers see worms of about 1-1/2 to 2 inches long, it is likely too late to spray.

Cutworms are difficult to spot on corn plants, according to an Extension bulletin by Entomologist Alton Sparks Jr. with the University of Georgia, but they are more active at nighttime and easily seen at dusk and twilight. He indicates that cutworm larvae cut off corn plants around the soil where the plant comes out of the ground. This cutting can damage the plant severely, and growers may lose those plants.

To control them, Sparks advises spraying a foliar insecticide at day’s end, as the larvae become active.

The European corn borer lays its first generation of eggs between May and late June, according to Penn State entomologists. Growers will spot larvae that have hatched on the whorl part of the plant, where they feed from early June to mid-July. It lays its second generation on corn leaves from late July to late August. This second generation of larvae feed on the corn stalk during August and September.

According to Sparks, European corn borers can lay up to 50 eggs at a time. When they are close to hatching, the eggs may turn a dark color. Larvae that are full grown reach 3/4 to 1 inch long and are different colors. When identifying them, growers will notice small dark spots on their bodies, and they may appear greasy looking. While they can feed on most any stage of corn, he indicates their whorl feeding can lead to damage that resembles a gunshot hole. For example, as the larvae feed they can bore through the leaf. Once the leaf starts to grow and unfold, growers will see the shot holes that may appear in a line form. Larvae also may bore into the corn stalk and tassel, which may cause them to break. In addition, larvae can bore into the corn ears.

Sparks indicates that the European corn borer is more of a regulatory pest than one that causes economic losses. Insecticides usually easily control them.