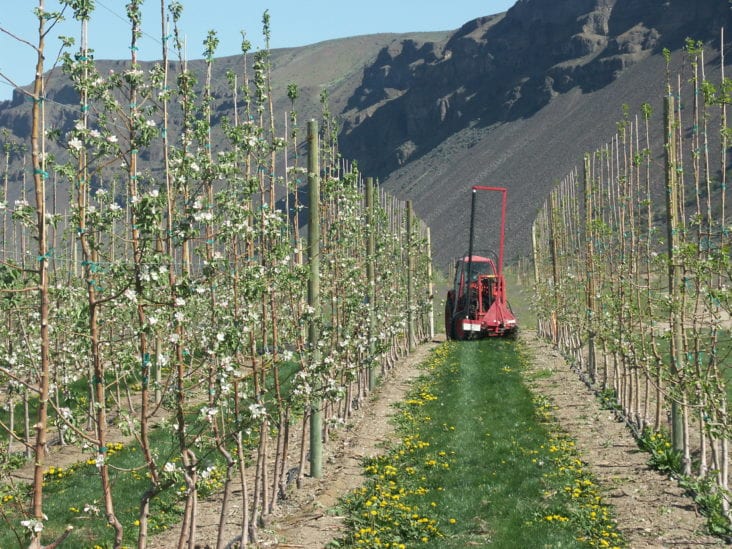 Spring planting is probably on your mind. Whether you’re waiting for new varieties to arrive, or old favorites that have regained their popularity, replanting the orchard is an ongoing task. – Root of Replant Disease

It’s also cause for concern. Trees planted in the same soils where others have been removed often show signs of stunted growth, lack in vigor and never become productive trees.

Good soil preparation before planting can fix concerns with soil compaction, pH levels, availability of nutrients or drainage concerns. As discussed in last month’s column, optimal soil fertility is best achieved with a rotation into cover crops for a year or more before planting – or replanting – occurs. This not only allows a grower to enhance organic matter and adjust soil chemical and physical characteristics, but also offers the chance to impede the life cycle of any pathogenic soil organisms.

Replant problems arise when soil conditions – both abiotic and biotic – aren’t compatible with the needs of the trees. Nutrient deficiencies, soil compaction, moisture levels or planting a tree whose growing needs clearly won’t be met in each location can all add up to replant issues.

“Replant disease primarily results from the activity of plant pathogenic fungi, oomycetes and nematodes,” said Mark Mazzola, Ph.D., research plant pathologist, Physiology and Pathology of Tree Fruits Research Unit, USDA-Agricultural Research Service. “There can exist other ‘replant problems,’ which are not biological in nature, but rather result from other horticulture or soil issues.”

Methods of combating replant disease have included planting between rows in the orchard, basically moving the tree row into the aisle. This moves the tree roots outside of the existing row, where soil pathogens may be problematic, to new ground. The old row can then be rotated out of production for several years and soils rejuvenated.

Mazzola has been working on a two-year nursery trial involving anaerobic soil disinfection (ASD). ASD results in this field trial were like those seen in fumigated soils thus far. In ASD, organic soil amendments are rapidly decomposed under anaerobic conditions. The resulting accumulation of toxic byproducts eliminates soil pathogens and allows beneficial microbes to thrive.

Soil fumigation with methyl bromide or similar chemicals was once recommended to combat replant disease. The environmental and human health impact of this approach, resulting in increasing regulations and cost, has led growers to find other, more sustainable methods of removing soil pathogens responsible for replant disease. Mustard crops have been shown to have some biofumigant properties.

“The composite seed meal formulation was as effective as soil fumigation in controlling replant disease and resulted in tree growth and yield that was equivalent to or greater than that attained in fumigated soils. The pre-plant seed meal amendment suppressed recolonization of orchard soils by multiple pathogens including parasitic lesion nematodes and root rot organisms such as Pythium spp. In contrast, fumigated soils were rapidly recolonized by both pathogens and trees were infested by these organisms resulting in lower yields than that attained in seed meal treated soil.”* For more information, visit the Washington State University website (http://www.treefruit.wsu.edu/publications) and search “rhizosphere microbiome.”

A variety of pathogens at the genus, not species, level seem to be involved in replant disease. A consistent pathogen complex has been found in orchard sites from the Northeast, to the Pacific Northwest and in Africa. The pathogenic complex, Mazzola said, includes the same pathogenic mixture, although the components may vary in composition. For example, lesion nematodes are always present, but may dominate over the pythium microorganisms at one site, and play second fiddle at another. And, the exact species of each genus of microbe may vary, too.

“While the relative contribution of any one component to the disease may vary among sites, there does exist a level of consistency in the makeup of the pathogen complex across sites,” Mazzola said.

The USDA-ARS breeding program, in conjunction with Cornell University at Geneva, New York, has been selecting for apple rootstocks resistant to replant disease pathogens. Led by Gennaro Fazio, plant breeder and research scientist, USDA-ARS, Plant Genetic Resources Unit, researchers have had some success in developing rootstocks that show some level of replant disease tolerance.

“We do have research that is aimed at understanding why some of our rootstocks respond well under replant disease conditions,” Fazio said. “The list of promising rootstocks include: G.4, G.935, G.214, G.814, G.890 and G.210. There are others, but these have worked well in the United States.”

It isn’t simply that these rootstocks are better adapted to poor soil conditions that impact tree growth. Those non-biological soil factors are readily fixed with good soil preparation, Fazio said, and aren’t the root biological cause of ARD. The rootstocks being developed can grow in despite of the soil biology – the pathogenic complex – present with ARD.

Exactly why these rootstocks can overcome replant disease isn’t fully understood, Fazio said. “We are trying to learn about the genetic factors that are associated with the tolerance to the growth repressive biology that forms in the soil after many years of the same roots growing.”

These rootstocks do become infected by ARD pathogens, but can overcome some level of disease and grow sufficiently, Mazzola said, making them tolerant to replant disease, not truly resistant to the pathogen complex involved.

Research is continuing, and the next step is to “understand how to deliver the resistance to all or most of the biological components of replant into the same rootstock,” Fazio said. An ongoing project – AppleRoot2Fruit, a National Institute of Food and Agriculture Specialty Crop Research Initiative – is advancing this goal.

Dr. Yanmin Zhu, USDA-ARS molecular biologist at the location in Wenatchee, Washington, where Mazzola is based, has been working to develop functional resistance in apple rootstock germplasm, aimed at some of the pathogens involved in ARD. Recent, limited experiments have had some hopeful results, Mazzola said.

Replant disease remains a concern for orchardists everywhere. Rootstocks with some tolerance to ARD are becoming commercially available. The exact mechanisms of replant disease are becoming more understood, as researchers are digging deeper to better understand its root causes and find solutions.