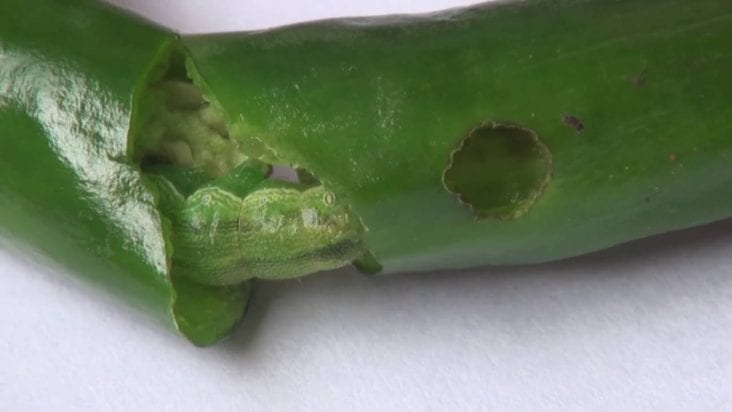 Identifying pests is a key component in controlling them. Some common ones in peppers are the beet armyworm, European corn borer and pepper maggot. Pepper Insects

The beet armyworm is a serious contender for major pests in pepper fields. This insect arrives late in the growing season and first attacks a pepper plant’s foliage before they gradually move into the fruit, according to the North Carolina State University Integrated Pest Management Center.

The small adults sport a mottled-gray look, according to the University of California Agriculture and Natural Resources. Or they can look like dusky-winged moths. The females may lay their eggs on the leaves in clusters that are fluffy to a dirty white scale appearance. Beet armyworms feed on weeds in the winter and spring; however, as spring arrives, they will start laying eggs in pepper fields while the plants are newly planted. Once eggs hatch within a short period of time, the tiny caterpillars will feed on the pepper plant. From their rapid feeding, the young beet armyworm will defoliate plant leaves and may leave a web over the feeding location. Older beet armyworms will chew irregular holes in the pepper leaves and feed on the fruit.

Because of their early feeding, the beet armyworm larvae mature within two to three weeks and can grow to around 1 inch in length, according to the University of California. The larvae’s green body is smooth and carries a few hairs. They sport mottled, dark lines on their backs. Their bodies can also include a dark green to black line with a white marking on each side. Growers may see a dark spot just above the spiracle on the second true pair of legs.

According to the University of California, the beet armyworm has some natural enemies for control. The most common beneficial parasites are wasps and tachinid flies. 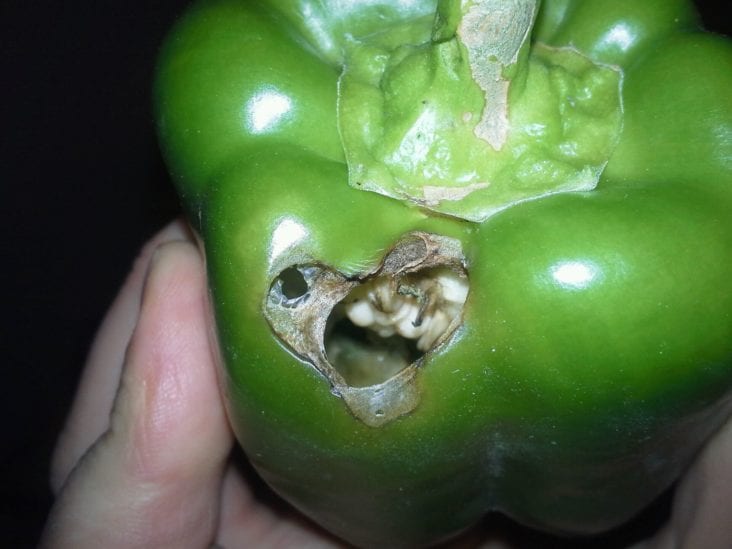 According to the NCSU IPM Center, the second and third generations of European corn borers do the most damage in peppers. The adults’ eggs are spotted underneath the leaves, often in large numbers. The mass is easily identified. It looks like fish scales. Once attached, the young larvae feed on the surface of the pepper plant. In just a day or shortly after, they can tunnel into the peppers near the seed caps.

The European corn borer moths are small, noted Stormy Sparks Jr. and David Riley with the University of Georgia. The wingspan of males is 20 to 26 millimeters, and the wingspan of females is 25 to 34 millimeters. Also, females are a pale yellow color to light brown and sport darker zigzag lines over their forewing and hindwing. In comparison, males are a darker, pale brown color with zigzag lines over their forewing and hindwing. In addition, females and males will have yellowish to gold-colored patches on their wings.

According to Sparks and Riley, when the European corn borer eggs are first laid, they are oval and flattened in shape with a creamy white color. As they age, they become darker. On the underside of leaves, they lay a cluster of 15 to 20 eggs. The eggs may hatch within four to nine days, depending on weather conditions. Larvae are a light brown or pinkish-gray color and may have a brown to black head. Once they mature, they can reach 2 centimeters in length. Growers will notice darker circles on the European corn borer’s back.

Their damage is significant. Larvae can harm the stem and fruit of peppers, according to Sparks and Riley.

To control the European corn borer, the center advises monitoring adult flights, using blacklight insect traps or sex pheromone traps. Base sprays on the insect number determination. Growers should spray every five to seven days as long as a moth flight period lasts, the center says.

According to the IPM Center at NCSU, the adult pepper maggot flies are similar in appearance to regular house flies. One difference is the black markings on their wings. When the female pepper maggots oviposit, the fruit ends up assuming a dimpled to deformed shape. Any infested fruit usually prematurely turns red in color.

The male flies stretch to around 6.5 millimeters, and females to about 7.5 millimeters, according to Sparks and Riley. Their head, abdomen and legs are pale yellow in color, and the thorax is a bright yellow with brownish stripes. The pepper maggot’s almost unforeseen wings sport dark bands that appear to form a V shape at the wing tips.

According to Sparks and Riley, the pepper maggot eggs look oval with only one end narrower than the other. The eggs also may appear tapered and curved. Larvae can stretch to about 12 millimeters. Their bodies are cylindrical and wide at the posterior end but taper to the pointed head. The larvae can look white to yellowish in color once it ages.

The pepper maggot causes slight damage to small pepper fruit, said Sparks and Riley. Along the oviposition, growers may notice a shallow dimple. Larvae will feed inside the fruit.

Larvae are hard to see on fruit unless they make an exit hole, Sparks and Riley said. The insect likes to appear before spring and after fall production time frames. They noted that sanitation is important in slowing infestation. After spring harvest is complete, they strongly advise growers to kill plants and fruit before the next planting.

To help control the pepper maggot, the NCSU IPM Center advises growers to rotate fields in peppers. Before determining when to spray, growers must determine how many adults are present in a field. They can grab their sticky traps and see how many maggots are captured in the traps. Spray weekly if necessary.

NOTE: Before using any of the aforementioned chemicals for the control of beet armyworm, European corn borer or pepper maggot, contact your extension agent or specialist to see if the products are available in your area and when to use which chemicals. Be sure to read the label and follow instructions carefully.