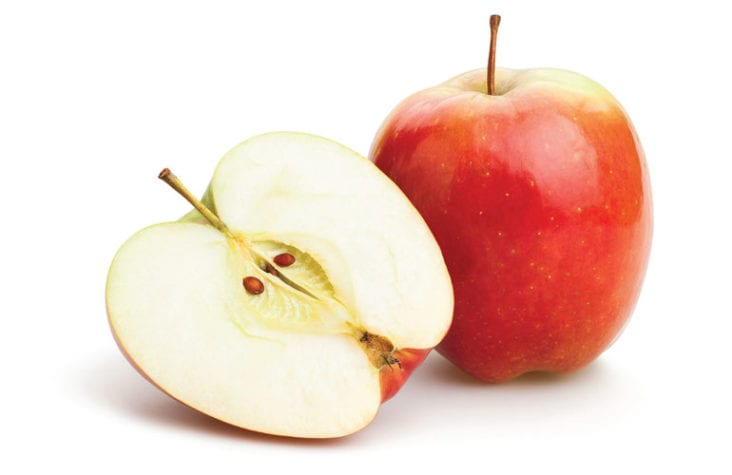 An old adage advised that houses be built facing south to catch maximum sunshine. A similar rule of thumb holds for apple orchards. Slope exposure will affect trees as they come out of dormancy. South-facing slopes warm up faster in spring. Northern slopes are last out of the cold.

There are further considerations. In Mid-Atlantic areas, a western-facing slope tends to be windier. It is not just tree health that is affected by prevailing winds. A strong wind will cause spray drift, which can lead to other problems.

Likewise, the slope of the land is important. A slope of 4 to 8 percent is ideal for an apple orchard. However, anything over 10 percent – while not impossible to maintain – will make machinery operation more challenging.

Hitting the magic 1,000-bushel-per-acre mark is possible in any well-managed orchard regardless of the planting scheme. Standard size trees do require ladders at harvest. However, they tend to be less expensive to plant and to maintain.

“In this area, producers are looking for varieties that tend to be resistant to scab,” said Bob Hartman of Hartman’s Fruit Nursery in Puyallup, Washington.

The second most important factor, he said, is responding to the increasing number of producers seeking small growing trees they can train to espalier.

A higher-density orchard will demand greater management skills. It also requires that labor be spread over a longer time period since tasks like pruning must be done in winter and summer.

“The fundamental premise you are working with is the time value of money,” said Tom Auvil, research horticulturalist with the Washington Tree Fruit Research Commission (WTFRC). His research shows that in semi-dwarf orchards with fewer than 300 trees per acre, there seems to be no way to make a positive return on investment (ROI). However, a planting of 1,000 to 3,000 trees per acre on a dwarfing rootstock will allow a producer to establish a canopy and make some money.

Whereas a figure of 1,000 to 3,000 trees may seem like a wide range, much depends on whether the planting is on a vertical trellis or an angled canopy. A 10-by-3-foot spacing is typical for a vertical planting. That spacing will give 1,450 trees per acre. “We stole that idea from the Europeans,” Auvil said. There, a 3-by-0.9-meter planting is standard.

Hartman said he has seen successful slender spindle plantings in Italy where growers used a 1-meter spacing. Though not his first choice, he has tried the slender spindle format with spacing 3 feet apart.

In either case, because tree size is smaller, production becomes more efficient. Brains and nimbleness replace the need for brute strength, allowing greater flexibility in the labor you can hire, Baugher said. High-density orchards also make it easier for fewer people to take care of more trees, but in a smaller area.

Especially on the East Coast, but also elsewhere nationwide, there is a trend away from the traditional medium-density, freestanding orchard to a high-density, supported orchard. For decades, growers have been encouraged to “train to a central leader.” That is great advice for a medium-density system. Trees got cut back severely for several years to stimulate growth. Emphasis is placed on building a large, strong framework to support future crops.

Fan of the espalier method

Hartman is a proponent of the espalier system in his area. A nurseryman with 35 years in the business, he said that the espalier is especially indicated for the later-ripening apple varieties.

He points to a block of Keepsake apples which, in his area, ripen in late October to early November. “I planted espalier in a north-south orientation,” he said. As a result, it gets full sun on one side in the morning and the other in the afternoon. “All the fruit on both sides was perfect,” he added.

The same apple, planted in the slender spindle format did not develop as well as he would like, he said: “For a late-ripening apple, the espalier is a better format than slender spindle.”

Penn State professor of horticulture Robert Crassweller said that, in high-density systems, excessive growth is discouraged. Instead of a large, strong framework, a weak-framed tree is desirable. In a tall spindle or French axe system, little pruning is done in early years. The goal is to promote early fruiting, which will inhibit future growth.

However, as the orchard matures, it is necessary to prune in summer and winter.

Producers tend to worry about fertility and soil pH. Soil can be limed or fertilized. As long as soil pH is in the 6.0 to 6.5 range, trees will grow well. What is very difficult to change is the actual soil itself – whether well drained, loamy or clayey. Water quality is another nontree consideration across most of the country.

Apples, as plants, tend to be somewhat forgiving of soil types. Stone fruits, like peaches, cherries or plums, are persnickety when it comes to poorly drained soil. If the soil is really bad in an area, a fruit producer might want to avoid apples and look at pears as an alternative.

That said, there are management differences between orchards planted on sandy soils and those in volcanic or loam soils. And, it makes a difference whether the orchard is being planted into old orchard land or into land that has been row-cropped.

“In a renovation, prior to establishment, be sure to check the nutrition in the old tree rows,” Auvil said.

Equally important is to be aware of soil compaction in the old drive rows. “Every other row will be compacted soil,” Auvil said. The solution: rip to 36 inches.

If the new orchard block was cropped until recently, plow down any stubble left from the field crop in late summer to increase soil organic matter. After the field crop has been plowed down, take a soil test before doing the final disking and leveling. Incorporate any needed amendments, such as lime, phosphorus or potassium.

If multiflora rose, thistle, poison ivy or hackberry are in the field, they should be treated in the summer or fall with glyphosate. If, for example, the field has been fallow for some time, controlling problem weeds likely will require two or three treatments of glyphosate. Allow time for the job to get done and the materials to work.

Once the woody weeds are handled, turn to soil preparation. “It is best to subsoil as deeply as possible,” Crassweller said, adding that running a deep shank in two directions across the field will break up any existing hardpans.

This might be a good time to look at the soil, too. The trees will be living in that soil for the next decade or so. In the volcanic soils of Washington State, most soils do not have P or K issues. “More important are issues arising from your water source,” Auvil said. The pH of the soil is the most important nutritional factor in the West.

“Some wells are salty,” Auvil said. If soil amendment needs to be done, a good time to start is before planting.

Along with tree planting, producers should be looking at how they will plant the new drive rows for machinery.

Orchard sod should be planted the fall before trees are planted. The grass cover traditionally used in Pennsylvania, according to Biglerville, Pennsylvania-based Fruit Research and Extension Center (FREC), is Kentucky-31 tall fescue. It establishes rapidly and provides a durable cover crop. The downside is that it requires frequent mowing. The best time to plant seed is mid-August to late September. Seed the grass at a rate of 20 to 40 pounds per acre.

An orchard can only be as good as the quality of its young trees. A planting begun with poor-quality trees may never recover. Buy the best trees that you can. Bargain or low-priced trees typically are more costly in the long run, experts noted.

An individual tree’s success is based on the tree. It is often quoted (from the textbook “Training and Pruning Apple and Pear Trees” by Forshey, Elfving & Stebbins) that the limiting factor in the performance of an apple tree is the shade the tree casts upon itself. (This book should be on every grower’s bookshelf.)

Especially if the orchard site has been open pasture or field cropland, be sure to take a nematode sample, Crassweller said.

The new dwarfing systems, which typically see 1,000 to 1,500 trees per acre, require use of fully dwarfing rootstocks such as M.9, B.9, G.41 and G.16, researchers at FREC have determined.

On the West Coast, Auvil said they are having great success with the Geneva rootstocks. “We are seeing 15 percent to 30 percent higher yields,” he said. Plus, there is the additional bonus of some disease resistance.

Nothing is prettier than an orchard in full bloom. Yet it may be necessary to knock back some blossoms so the tree does not compete with itself for fruit set. Chemical pruning is one way to solve the problem. It is relatively cheap and will maximize retention of high-quality fruit resulting in better size, color, shape, finish and sugars, come harvest. Having consistency by maintaining a proper balance of vegetative and reproductive growth will pay off down the road.

Materials registered for thinning apples include Amid-Thin W (NAAm), according to Crassweller. It can be applied between petal fall to seven days after full bloom. Typical rates for Amid-Thin are 25 to 40 ppm.

Mechanized thinning is another operation – and it works much like giving the orchard a haircut. A giant sawing mechanism, tractor-mounted perpendicular to the ground, trims off growth.

Irrigation is a key factor and another area where orchard production continues to move forward in big leaps. The buzz in apple production is drip irrigation. A quick trip to a local farm show or paging through Growing magazine will put a producer in touch with a dozen good vendors who are advancing drip irrigation and fertigation technology.

An orchard going into sandy ground may have only 3/4 of an inch of available water per foot. That means irrigation will have to be provided more frequently and in smaller quantities.

Additionally, the lengths set for irrigation on a heavier soil will not be what are used on sand.

Considering the latter as a bigger challenge, a producer on sandy ground will probably want to apply drips of irrigation eight to 10 times a day in short bursts of 10 minutes or so, especially through June and July.

The telemetry available in modern orchards allows a producer to remain in the office and still remotely monitor and maintain a good irrigation schedule.

An orchard well planted, properly scouted for pest problems, fertilized and irrigated to meet its needs and monitored closely will reward the producer with a great crop when harvest time comes in late summer and early fall.