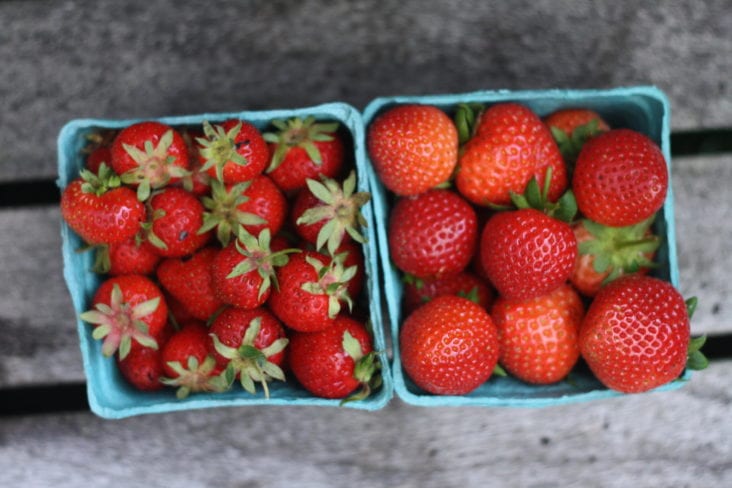 Strawberries entice shoppers. Their brilliant hue and inviting shapes promise tantalizing taste. Food processors, too, capitalize on the appetizing color and distinctive flavor imparted by strawberries for an array of products.

Strawberry production, however, presents a host of challenges.

Due to the favorable climates, California produces the majority of strawberries, with Florida providing the second-largest market share. Many of these berries are shipped considerable distances. However, every state and most foreign countries grow strawberries, and regions cater to their own markets. Pacific Northwest strawberry farms specialize in growing for the processing industries. Northeast, South and Midwest growers produce berries primarily for their local markets, including pick-your-own operations.

To meet the demand for improved cultivars, breeders strive for traits that perform well under their particular constraints. Because cultivars often show a good deal of variability in their performance in different areas, breeding challenges are compounded.

Professor Kirk Larson, a pomologist in the department of plant sciences, University of California, Davis, says, “Strawberry breeding reflects the quest for quality. Before strawberries reach the consumer, varieties have been developed by a selection process that includes traits such as flavor and appearance, disease resistance, acceptable yields, ability to withstand environmental stresses and harvesting ease.” Larson adds, “The huge expansion of the global market illustrates the universal desirability of this tasty fruit.”

After promising crosses have been performed and selected, potential new cultivars undergo trials, in some instances for many years and in a range of regions. In the United States, many university breeders cooperate with the Agricultural Research Services (ARS) of the USDA, with other universities and with other countries for improved cultivars. As a result, the growing season has become longer, and numerous advancements have been realized in varieties designed with desirable attributes to fit production and market demands.

Research programs among the various regions focus on specific attributes. Consequently, there is a wide range of varieties. Depending on the climate, season and culture, day-neutral, everbearing, or June-bearing cultivars may be desirable. Some varieties perform best in the matted-row system, others thrive with plasticulture. Strawberries are subject to numerous diseases and pests; these are more problematic in some regions. Large berry size and bright coloration appeal to fresh market customers, and because many demand strawberries out of their local season, these berries must be firm and retain their quality.

Tim Nourse, Nourse Farms, explains that strawberry producers need new varieties to remain competitive in today’s market, which demands quality fruit that still tastes good after it travels through the distribution chain. Nourse said the future looks bright for berries, considering the current emphasis on health attributes, such as the antioxidants provided by strawberries. “What else in life is as good as it is good for you?” he asks.

To be accepted, new cultivars must contribute a new desirable trait, yet retain or improve upon the attributes of standards. The following new and relatively new cultivars available by press time illustrate the advancements in strawberry research. For example, new berries from the UC Davis efforts compare favorably in size and productivity with several of their standard varieties. The University of Florida program’s new releases have higher yields. The collaborative efforts of the Carolinas and the ARS have produced improved disease resistance and earlier fruit. Cornell’s program has developed better quality berries for their region. In addition, the University of Wisconsin is developing June-bearing cultivars with enhanced size and winter hardiness. Several of the Canadian breeding programs continue to release quality strawberries adaptable to several regions in the United States. Virginia Tech is using germplasm of wild strawberries to develop commercial cultivars with resistance to pathogens. Researchers at the University of Maryland are refining uniform ripening, which could lead to mechanical harvesting.

Propagated from red stele-resistant seedlings, Galletta’s large, high-quality fruit warranted testing. It has been evaluated extensively in replicated trials in several North Carolina sites, as well as in Charleston, S.C., and Beltsville, Md., along with grower trials in North Carolina and Maryland. At the Castle Hayne, N.C., 2006 trials (as NCS 93-05) it produced marketable yields of 660 grams per plant and 20-gram berry size. The large, attractive, firm fruit ripens earlier than Bish and Camarosa, but later than Sweet Charlie. Galletta has a conic shape and glossy dark-red skin with medium-red flesh. It is not resistant to anthracnose fruit rot, but is much more field tolerant than Camarosa or Chandler.

L’Amour’s exceptional taste is commanding a growing market share in the Northeast. Bright red and heart-shaped, with a fancy upright calyx, its appearance in the basket attracts purchasers. Ripening in the early midseason, this Cornell-bred berry’s cropping season spans the second and third week of June.

Developed by the strawberry improvement program at the University of California, Davis, Monterey is moderately day-neutral. A vigorous plant, it has a similar production pattern to Albion, but may require slightly more space. The outstanding flavor has a distinctly sweet aftertaste that is unique among California cultivars. It is slightly larger than Albion, but less firm. With the exception of powdery mildew, it also has good disease resistance. In Watsonville 2005-07 trials, Monterey’s average fruit size was 32.6 grams, and its total yield exceeded that of Albion by 35 percent.

Ovation resists five eastern races of red stele root rot plus most stem and leaf diseases, but it is moderately susceptible to powdery mildew. No susceptibility to anthracnose crown and fruit rot has been shown in field evaluations. Released several years ago by ARS in Beltsville, Md., Ovation is an exceptionally late June-bearing cultivar. It is better suited to plasticulture than matted-row culture. It consistently produces top yields of aromatic, glossy, red-orange, large, pleasantly mild, slightly acidic fruit. The overall fruit size averages 16 grams.

The short-day cultivar Palomar has shown promise throughout California. Designated as C221 or Cal.00.259-2, Palomar produced similar early yields and fruit size as Ventana, plus had substantially lower cull rates and higher appearance scores. It exceeded seasonal yields in the Santa Maria trials. In the Irvine 2005-06 trials, Palomar had smaller total yields than Ventana, but had 25 percent higher early yields and greater fruit size and firmness. However, the 2006-07 Irvine trials’ preliminary results reported Palomar’s total yields over 75 percent higher than those of Ventana. Palomar did not exceed Ventana’s yield at the Watsonville trials, but scored higher in appearance and firmness. Because it is a smaller plant, Palomar permits greater density and harvest efficiency. Its lessened vegetative vigor could benefit from clear plastic mulch usage plus careful soil and fertility management. Also, Palomar tends to produce its early fruit with a dry calyx, and is susceptible to Phytophthora cactorum root and crown rot.

Due to its strong flowering response, Portola is especially well adapted to spring and summer planting systems in California. Its vigorous habit may require slightly lower plant density than Albion. Portola’s similarly sized fruit is somewhat lighter, but shinier, plus its flavor is consistently excellent throughout the season. It has an average fruit size of 31.5 grams, and its yield exceeds Albion’s. Although a little less rain-tolerant than Albion, postharvest characteristics are similar. In addition, it demonstrates good disease resistance.

Bred in Spain by Planasa-Inotalis, Sabrosa produces conical, bright-red fruit that maintains size throughout the season. Highly aromatic, it has good skin elasticity even after chilling, with dense, red pulp that has high sugar levels. The flavor imparts a good balance of sugar and acidity. The crown leaves of its vigorous, erect, compact plants are not dense. The root system regenerates easily and resists many soil pathogens. Sabrosa, known in Europe as Candonga, is adapted to different soil types and to organic culture. Good resistance to botrytis and Phytophthora has been observed.

Stolo has shown considerable interest in grower trials in the Pacific Northwest. From the Pacific Agri-Food Research Centre (PARC), Agriculture and Agri-Food Canada (AAFC), Stolo overcomes some of the weaknesses of Totem and other cultivars of this type. It appears to have good disease and pest resistance. Its harvest season starts a few days earlier than Totem and lasts several days longer. The bright-red, cone-shaped, glossy fruit has a pleasing flavor. Very productive, its large, firm fruit is suitable for both processing and fresh market. The plants produce sufficient runners for matted-row culture. Moreover, its tolerance to root weevils accounts for maintaining high second-year yields.

Wendy’s early production, size and excellent flavor earn it a high rank for quality with its exclusive distributor, Nourse Farms. Wendy shows resistance to red stele and powdery mildew, but not verticillium wilt. The vigorous plants runner well. Developed by the Kentville Research Station in Nova Scotia, Wendy is adaptable for both north and Midwest regions. The very early flowering can require frost protection.

When planted the last week of September or the first week of October in the west-central Florida growing regions, Winter Dawn can produce higher yields November through February than other cultivars. A University of Florida release, Winter Dawn has demonstrated resistance to botrytis and anthracnose fruit rots. Winter Dawn produces relatively large fruits on small plants.

Several other University of Florida breeding program selections will be further evaluated this season. FL 01-116 has the potential to produce high early-season yields of large, attractive fruit. With its open canopy, spray penetration and harvest become easier. FL 00-51 also produces early, and its fruit is large, firm and flavorful. Because the fruit is susceptible to rain damage, evaluation will only be in greenhouse and plastic tunnel trials.

V151, an early, bright-red variety from the Ontario breeding program, has been selected for 2008 trials because of its high production.

Cornell University has a nursery guide for berry crops on their Web site on fruit resources. It may be accessed at www.hort.cornell.edu/extension/commercial/fruit/Berries/nurseries.

The author is a writer/researcher specializing in agriculture. She currently resides in central Pennsylvania.