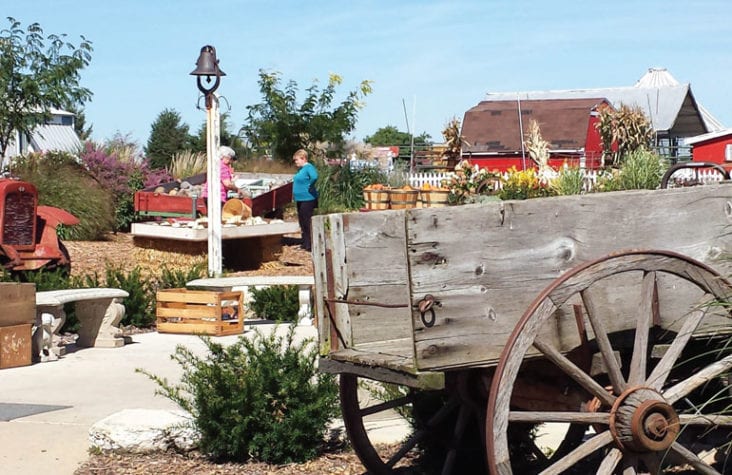 The American Cancer Society estimates that one in eight or 12 percent of women will develop invasive breast cancer in their lifetime. In an effort to raise awareness of the disease and funds for researching a cure, the association sponsors National Breast Cancer Awareness month every October.

Businesses and individuals alike show an outpouring of support through creative fundraising initiatives centered around “pink,” the color that signifies breast cancer awareness. You can check out abcfundraising.com for some great fundraising ideas Growers, too, have found unique ways to support the cause by doing what they do best – raising crops.

For Ackerman Family Farms, LLC near Morton, Illinois, that’s growing pink pumpkins. The Pink Porcelain Doll variety is one of nearly 160 varieties grown on the farm. For every pumpkin sold, the family donates 25 cents to breast cancer research.

“It’s a great way to give back and it works out well that it coincides with October, the busiest time for pumpkins,” John Ackerman said. John and his wife, Yvette, “Eve,” are the current owner/operators of the 300-acre farm.

After tough financial times for farmers in the ’80s and well into the ’90s, most small farmers either expanded their operations or got out of farming entirely. “Our hearts have always been here on the family farm, so we explored a third option: specialty crops,” he said.

The late John H. Ackerman and his wife, Louise Lillian Habeger, established the farmstead in 1911. Since then, five generations of Ackerman family members have called the farm home. The family started out producing corn, raising cattle and hogs. John’s son, Clyde, also known as “Papa,” was born in 1914 and by the 1930s and ’40s, he had earned international acclaim as a breeder of purebred Yorkshire hogs. His pen of barrows at Chicago’s 1957 International Live Stock Exposition won top honors.

By the 1970s, Papa and his son, the youngest John H., expanded the farming operation to include cattle along with hogs. A 60-head cow/calf herd and feedlot cattle numbers were built up on the farm. As the 1980s came along, the family added processing pumpkins to the fields and sold the crop to Morton’s Libby plant.

The diversified farm enterprise struggled during the 1980s as the farm crisis stifled agriculture across the United States. The cattle and the hogs were sold, and John, scouting ways to stay on the farm full time, was looking for a specialty crop. Having earned an associate’s degree from Illinois Central College and a bachelor’s degree in agricultural economics from University of Illinois, he knew that if he could find a specialty crop that gave the farm a niche market, he could make it work.

“All of the money I earned as a kid showing and selling steers through the 4-H program went toward my college education,” he said. “My heart was on the farm, and that’s where I wanted to be.”

A short stint as a door-to-door, long-term insurance salesman solidified his resolve to stay on the farm and, in 1999, he and his family chose to specialize in ornamental pumpkins.

“We had tried sweet corn and fresh-cut flowers, but it was difficult to get cars to stop along our busy highway,” he said. “In 1998, we set out some of our canning pumpkins and people began to stop and asked to purchase them. We knew then we were onto something.”

The farm’s location in north central Illinois is geographically situated in an ideal location for growing pumpkins.

“Illinois is far enough south that the growing season is long enough for 120-day processing pumpkins, but at the same time it’s not so far south that ‘wet diseases’ that plague vining crops aren’t as prevalent,” he said.

Not only is the climate near perfect, the soil pH and fertility are maintained as well.

“We keep our soil PH above 6,” he said. “We conduct soil tests often and lime as needed, but the native soil is well suited to growing pumpkins.”

So the busy highway in front of the farm that was once considered a liability became a significant asset.

“We had always looked at the highway as a liability with farm equipment pulling in and out of the farm and as dangerous to our animals,” he said. “But we decided to use it to our advantage to sell our pumpkins through the roadside stand.”

In 1999, when John and Eve planted their first crop of pumpkins for the retail market, they started with 1.25 acres and around 20 varieties. That first season they left a canister by the road and sold the pumpkins on the honor system. An old-school bell was available for customers to summon for help. “People have been really supportive, and we’ve been blessed that it has worked so well,” he said.

Today, they grow pumpkins as small as those that fit in your hand to the largest varieties weighed in hopes of setting records. Decorative pumpkins and gourds are also a hit among consumers interested in decorating for fall.

In the 17 years since, local repeat customers and out-of-towners visit the town’s annual Morton Pumpkin Festival, and the family has increased the total acreage and the number of varieties grown.

This year, John has planted 52 acres of processing pumpkins and 30 acres of handpicked ornamentals with nearly 160 varieties. Farmer John’s favorites for eating include the Libby varieties (descended from Dickinson), Winter Luxury Pie and White Cushaw. Trending varieties include the warty Knuckleheads and many of the blue and white varieties.

If the weather continues to provide a good growing season, he anticipates the ornamental crops will yield 2 tons per acre or as many as 30,000 pumpkins, all of which are harvested by hand and sold at the retail stand on the farm property.

The family has also made the farm a destination with a corn maze, weekend hayrack rides, mini donkeys and goats. Each fall, nearly 2,000 school children take school field trip tours to learn about farm life and experience agriculture. The school visits include mini educational sessions, hayrides and visits with the animals. The same experiences are available to the public on weekends. The shed that once housed Papa’s prized pigs has been renovated and serves as the gift shop.

To diversify income, John continues to plant corn, soybeans and wheat. Many years, he also raises processing pumpkins on contract.

Vine crops, pumpkins in particular, are more fickle than other crops.

“The big leaves that grow low to the ground can be prone to soil splotching, fungus and insects,” he said.

Over the nearly two decades he has specialized in growing pumpkins, John has looked for methods of improving yield and controlling weed and pest pressures.

During the ’80s it was common to plant twice as many seeds as was believed to be needed. After the crop sprouted, the beds were cultivated to the needed totals. Today, however, that approach is not widely used. Instead, farmers plant to stand, meaning they plant the number of seeds believed to be needed once the crop matures in the field.

To achieve optimum density, John has modified his planting equipment to plant pairs for rows. Using a 30-inch planter, he leaves two rows empty and fills those on either side of the blanks.

This gives a 90-inch spacing between each pair of rows for his largest variety, allowing room for the vines to sprawl between the pairs of rows.

“On our largest varieties we’re planting about 1,600 seeds or less than a half pound per acre,” he said. “On small bush-type plants we’re planting 4,000 seeds per acres.”

Yields vary significantly. “You just have to know you’re going to have good years and bad years,” he said.

Once the seeds have germinated, weed control is challenging. Although Illinois leads the nation in production, the total number of acres planted in pumpkins each year is far below the acres planted into corn or soybeans. Thus, less research dollars are allocated to finding new herbicides for pumpkin crops.

“The ‘hoe’ is the name of our most used herbicide,” he joked.

By that he means that workers head out into the fields with a handheld hoe and manually remove weeds from the patch before they overtake the crop. He has experimented with cover crops and no-till approaches, but hasn’t found widespread success.

As much as John loves being in the fields, he knows it’s equally important to market the crop he grows to keep customers coming back each year. He’s built a loyal following by paying attention to trends, having diverse options and taking advantage of traditional and social media.

Growing a diverse assortment of varieties is one tactic he uses.

“We have customers come out with pictures of arrangements they have found on Pinterest or that have been written up in a magazine,” he said. “We may not have the exact variety they are looking for, but because we have so many different options, we can usually find something to fit their needs.”

He and Eve also embrace the media when they coming knocking on the door. They have been featured in local television news stories and magazine articles, and were even featured on an international reality show called “Pitchin In,” aired by the Food Network in Canada. The reality television show features host Lynn Crawford, one of Canada’s best-known celebrity chefs. She travels to far-flung locations, doing whatever it takes to get at the best, freshest ingredients in the world.

“The TV show experience was so much fun,” he said. “The production crew taped all week, were extraordinarily nice, and the meal Lynn prepared for us using seven to eight different varieties of our own pumpkins and squash was absolutely amazing!”

From the grandparents who bring the grandkids out for a carving pumpkin to food lovers looking for the best variety for their pie to families, animal and nature lovers, “It’s been a real education dealing directly with the public,” he said.

“We are blessed. We get a neat mix of people that come to the farm.”