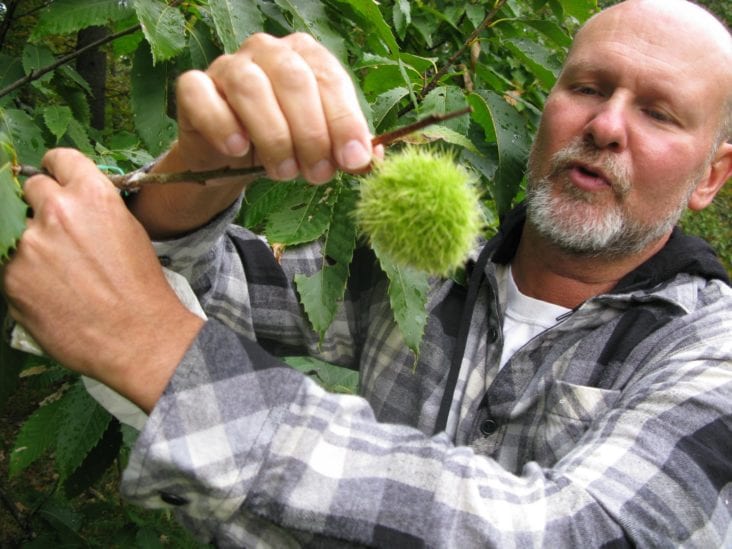 Chestnuts not just for holidays anymore.

When Americans think of chestnuts, it is usually in connection with the Christmas song Nat King Cole made famous. However, chestnuts were not only eaten during holidays in the past, Castanea dentate (or American Chestnut) used to be an important staple in the American diet and a graceful tree that lined U.S. streets in towns across the country before chestnut blight wiped out almost all of the 3 billion trees by the 1930s (the only blight-free trees that exist today are located in the northwestern area of the United States).

Tom Wahl, owner of Red Fern Farm (www.RedFernFarm.com), is a successful chestnut grower from Iowa and marketing coordinator for the Southeast Iowa Nut Growers, a network of chestnut growers from Iowa, Missouri and Illinois. The cooperative, which has expanded from eight growers to over 50 in just 10 years, sells chestnuts through mail order, wholesale to grocery stores in Iowa. 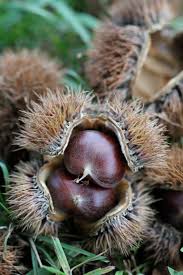 “All our chestnuts are sold within Iowa. That’s because the demand is so high and supply is so short. For now, [our cooperative] can’t even scratch the demand in Iowa, let alone nationwide,” said Wahl. Other chestnut growers throughout Delaware, Ohio, Kansas, Oregon and California are also sold out before Thanksgiving; the peak of harvest is in early October. “Anybody who grows chestnuts has no trouble selling them,” he said.

Wahl’s farm is 86 acres, with 28 of those dedicated to tree crop and pasture. He began by planting one chestnut tree in 1990, and now he has over 700 nut-bearing trees. Wahl’s interest in growing chestnuts stemmed from the trees’ sustainability. “I wanted to grow chestnut and other tree crops without lots of fossil fuels, chemical fertilizers and pesticides,” said Wahl, who also wrote a free booklet available online called “The Chestnut Primer,” which includes useful advice for first-time chestnut growers.

“Chestnuts can be a solid revenue source for growers,” said Wahl, who fetches $1.25 to $2.25 a pound wholesale for his certified “naturally grown” chestnuts, depending on the size (chestnuts retail between $4.50 and $5.50 per pound). Wahl’s chestnut trees, about 16 years old, produce between 30 and 50 pounds of chestnuts per tree per season, but older trees can produce closer to 500 or more pounds per year. Worldwide, chestnut production tends to range between 1,000 to 9,000 pounds per acre. Wahl estimates, conservatively, that production in the Midwestern state could reach 1,000 to 2,000 pounds per acre at maturity, and net profits could range from $1,000 to $6,000 per acre annually. While chestnuts can be grown on marginal land, Wahl said that the severe drought that has plagued the region for the past six years has decreased yields of his trees significantly (chestnut trees are drought-tolerant, but produce very few chestnuts during a dry spell), and Wahl’s major revenue source at the moment is selling chestnut nursery stock.

• Chestnut trees need significant investment in capital and labor to get them established. Studies conducted by the University of Missouri Center for AgroForestry have shown that start-up estimates from the U.S. West Coast range from $2,275 to $5,143 per acre.

• There is no return on investment for at least five years.

• Marketing can be difficult (joining a cooperative makes this easier).

• Chestnuts need to be refrigerated until sold.

• There is a general lack of knowledge and experience in the United States about chestnut-growing.

• Consumer education is needed since buyers often don’t know what to do with chestnuts, other than roast them. Chestnuts are often confused with “horse” chestnuts, which are poisonous, and Asian water chestnuts.

• While chestnuts are relatively pest-free and can be grown organically, there are several animals and insects that feed on chestnut trees including deer, rabbits and mice (all of which can be controlled using ventilated tree shelters.) Also, expect a competitive race with squirrel, chipmunks and other wildlife at harvest season when chestnuts fall from the trees (they cannot be shaken off the trees).

• Chestnut weevils are a more serious problem than wildlife if it infests a grower’s orchard. This pest requires spraying or a hot water treatment to allow the nut to be saleable. Adult weevils lay eggs in developing nuts; the larvae burrow through the kernel and destroy it. The best organic control, says Wahl, is achieved by allowing chickens to free-range in the orchard, and allow hogs to clean up any nuts missed during harvest, which effectively breaks the weevil’s life cycle.

• Harvesting must be done by hand since no mechanical harvesting device for chestnuts exists yet. Some growers rake them up, scoop them with a shovel or drape tarps or nets under the trees before the nut fall.

The most important part about starting a chestnut grove is the nursery stock. Initially, Wahl purchased seedlings through a catalog, none of which survived. “Chestnut trees don’t recover well from being transplanted without careful handling of the root system,” said Wahl, who ended up propagating his own stock and experimenting with grafting. He now sells chestnut seedlings commercially.

The chestnut stock also has to have at least 50 percent Chinese genetics in order to survive the blight that American chestnuts are susceptible to. Chinese chestnut trees also produce a better product for market, asserts Wahl. “Chinese chestnuts are much sweeter and store better than European varieties,” he said.

That said, there are not many reliable sources of strong chestnut stock. “If you get a good chestnut stock it will take a minimum of three to five years before the trees start producing chestnuts… which they will start doing when they are 6 to 8 feet tall,” said Wahl. However, it can take as long as 10 years if the tree is not cared for properly. (For a complete information of proper care and maintenance of chestnut trees, download the “Chestnut Primer” at www.pfi.iastate.edu/OFR/The_Chestnut_Primer_2002.pdf ).

Despite the obstacles to chestnut growers in the United States, a study by the University of Missouri Center for AgroForestry found that the work of U.S. chestnut grower associations can help further the chestnut industry by providing education and support to growers. Chestnuts can be a good source of revenue for growers willing to invest time, education and capital to make it work, said Wahl. “The market is wide open,” he said.